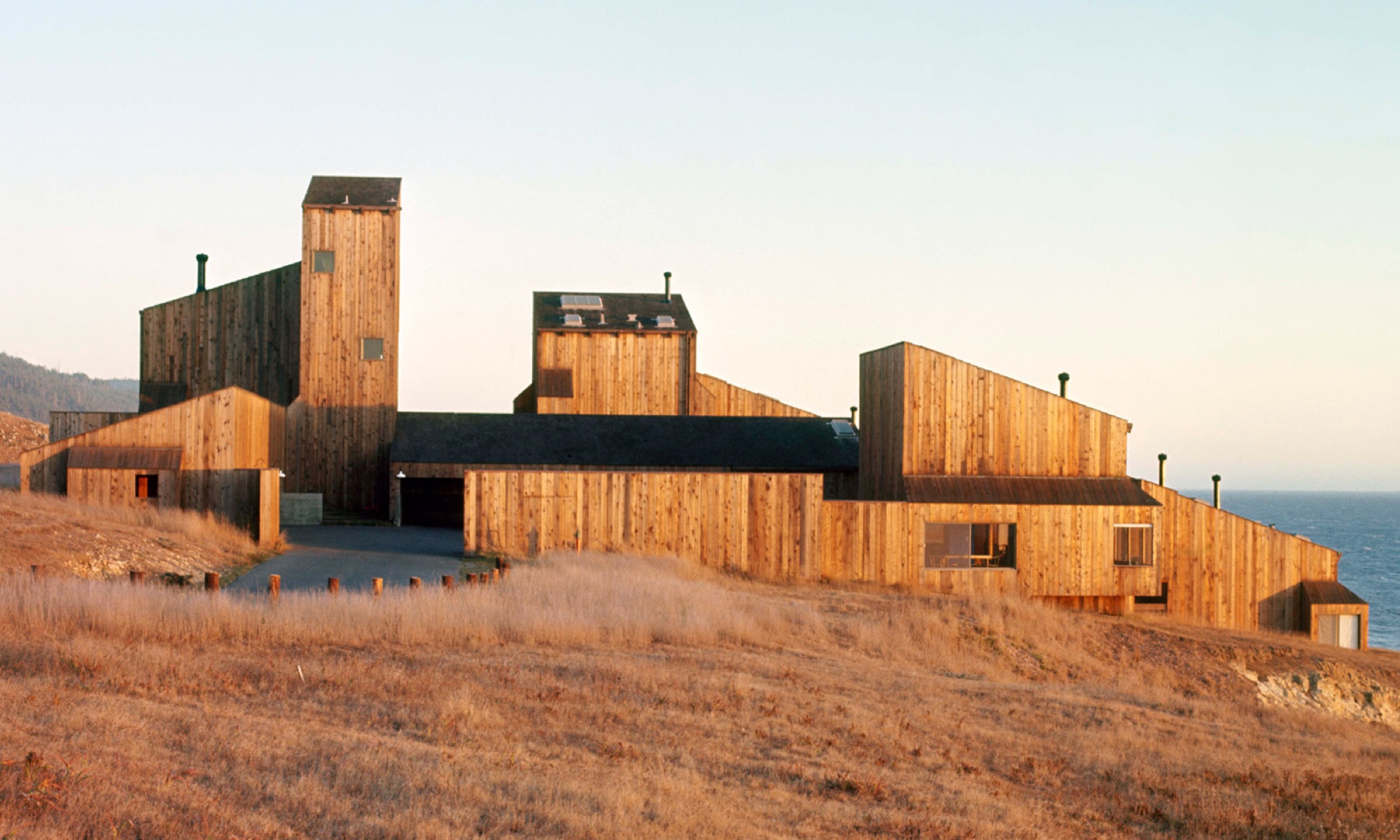 Utopia is a grandiose word. But in the 1960s, utopian thought became a preoccupation of those who found themselves left of center, outsiders to the suburban post-war boom that began in the 1950s. How could a new generation of intellectuals, designers, artists, and architects create a better world, one that defied the industrial-grade sameness that paid little mind to the environment, to the senses, and to aesthetic?

One hundred miles north of San Francisco, on a wind-swept & rugged section of California coast, lies the built result of such utopian dreams. Here is Sea Ranch, once a rather radical architectural experiment. Now, it is home to more tech millionaires than Berkeley professors. But Sea Ranch’s longevity speaks to its radical roots, and to the changing nature of utopian design in California and around the country 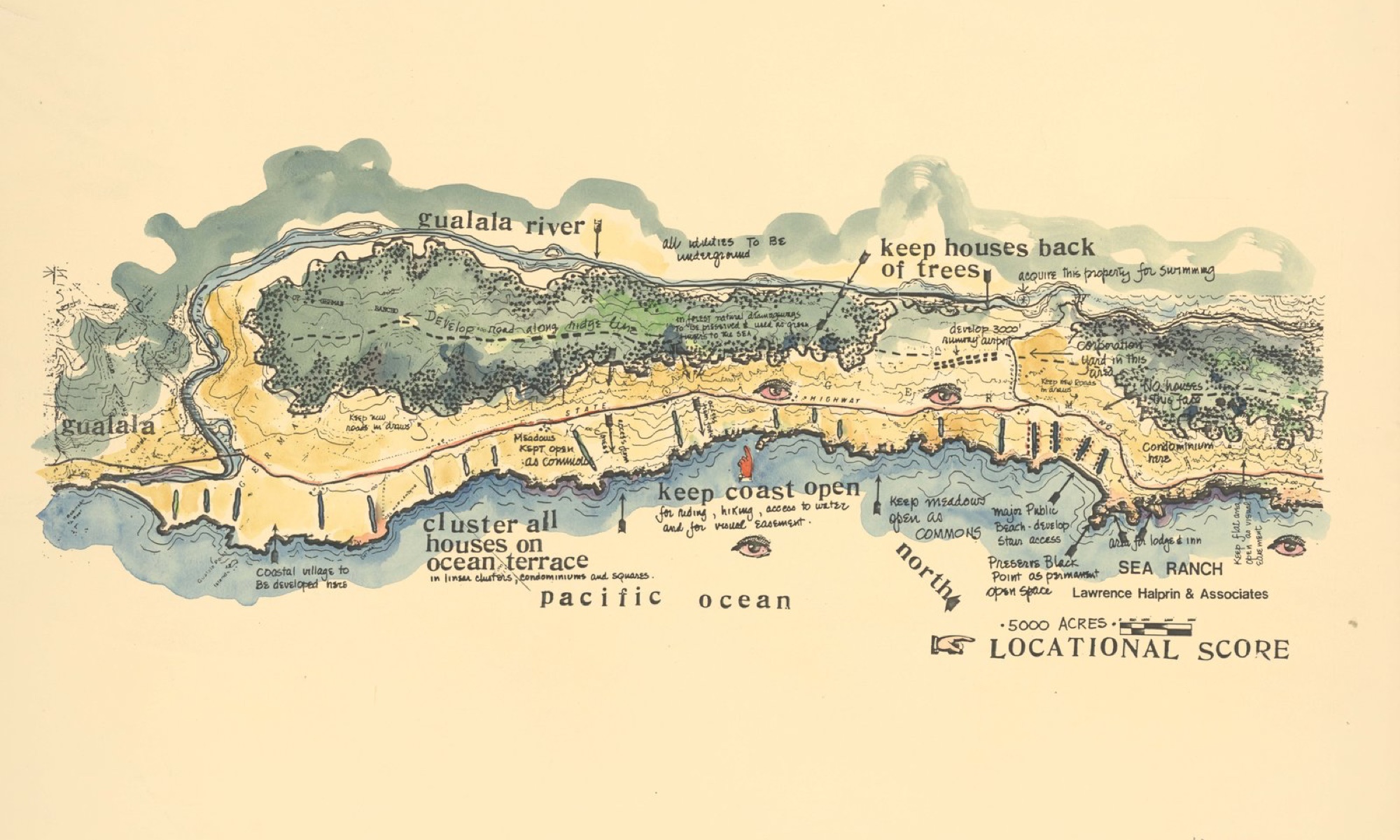 A drawing of the Sea Ranch property, incorporating key principles of the community. Via the Lawrence Halprin archive at the University of Pennsylvania.

Sea Ranch was originally a 10-mile tract of mostly-empty coastline. In 1963, architect and developer Al Boelke purchased the tract with the intention of building a community that followed a single guiding principle — ”living lightly on the land.” It was a philosophy informed by the environmental movement, a reaction to the artificiality of post-war architecture, and to the manicured lawns of suburban development.

Sea Ranch would be different. Its founding principal informed a strict set of community guidelines, written by the group of designers and architects who would be the first builders on the property. Homes were to be clad in redwood, small, with gardens hidden (so as not to compete with the natural landscape). The aesthetic was simple, natural, meant to blend into the washed-out green and brown of the landscape. No house was to intrude on the space or view of a neighbor. Curtains must be in neutral colors. Hot tubs had to be encased to hide garish covers. Laundry could not be dried outside. 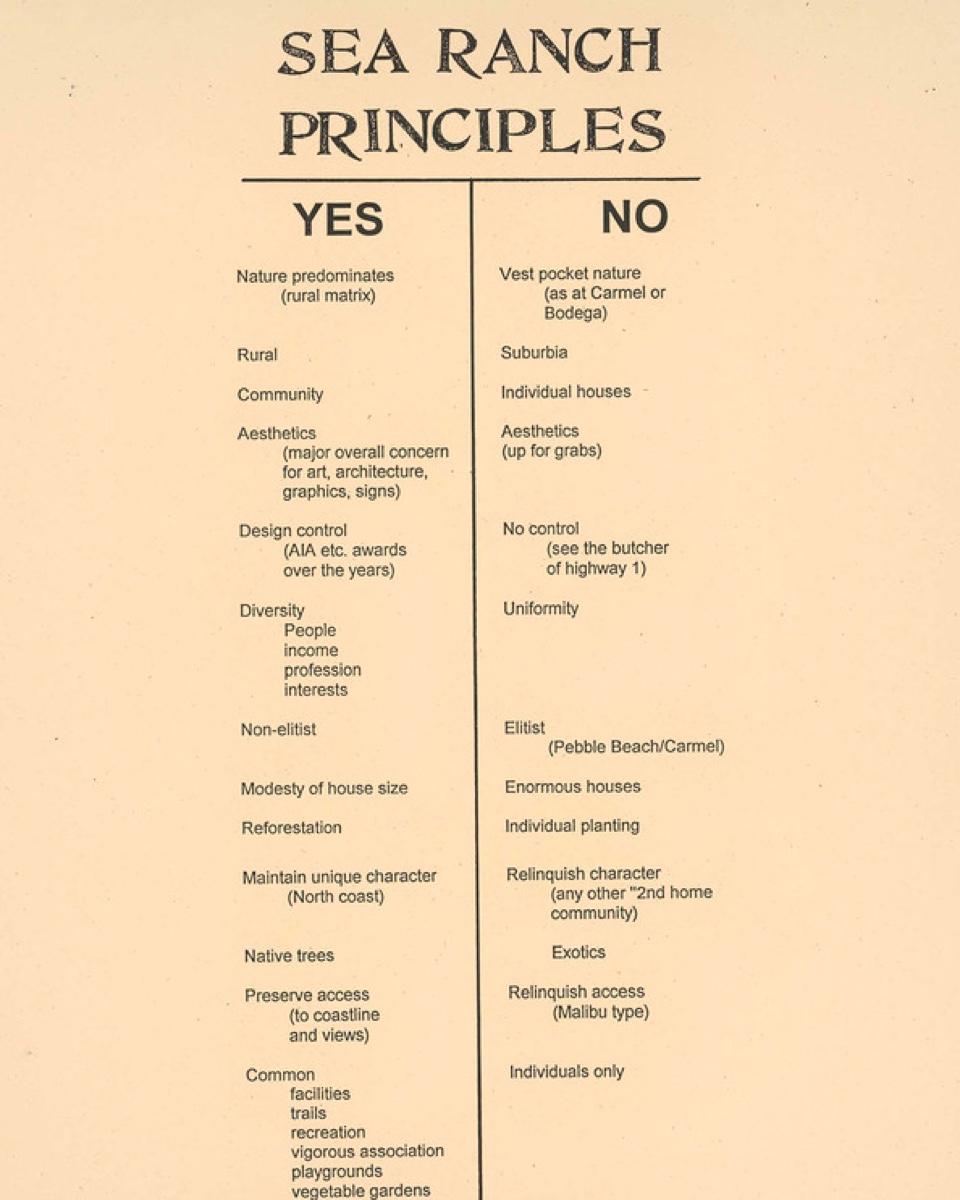 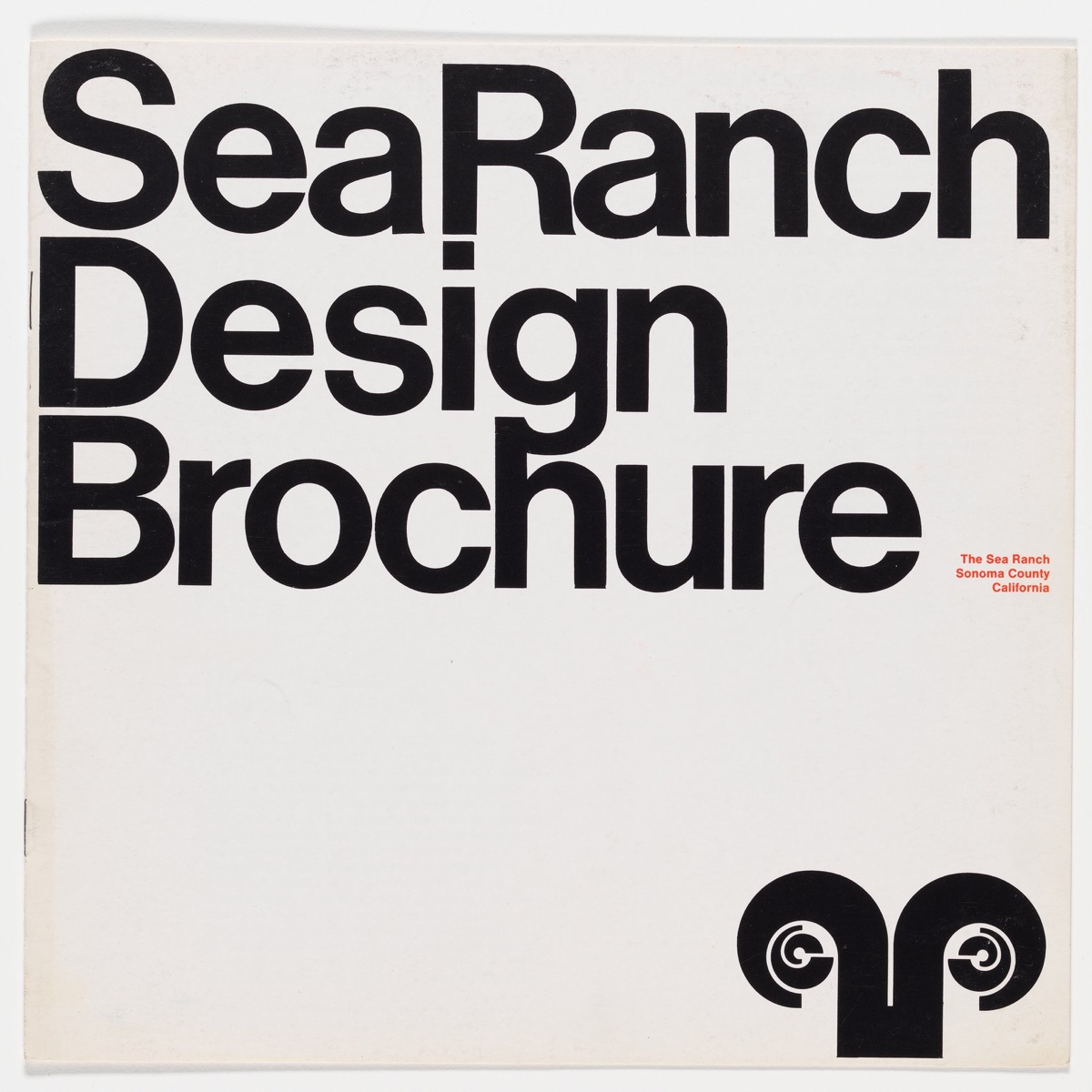 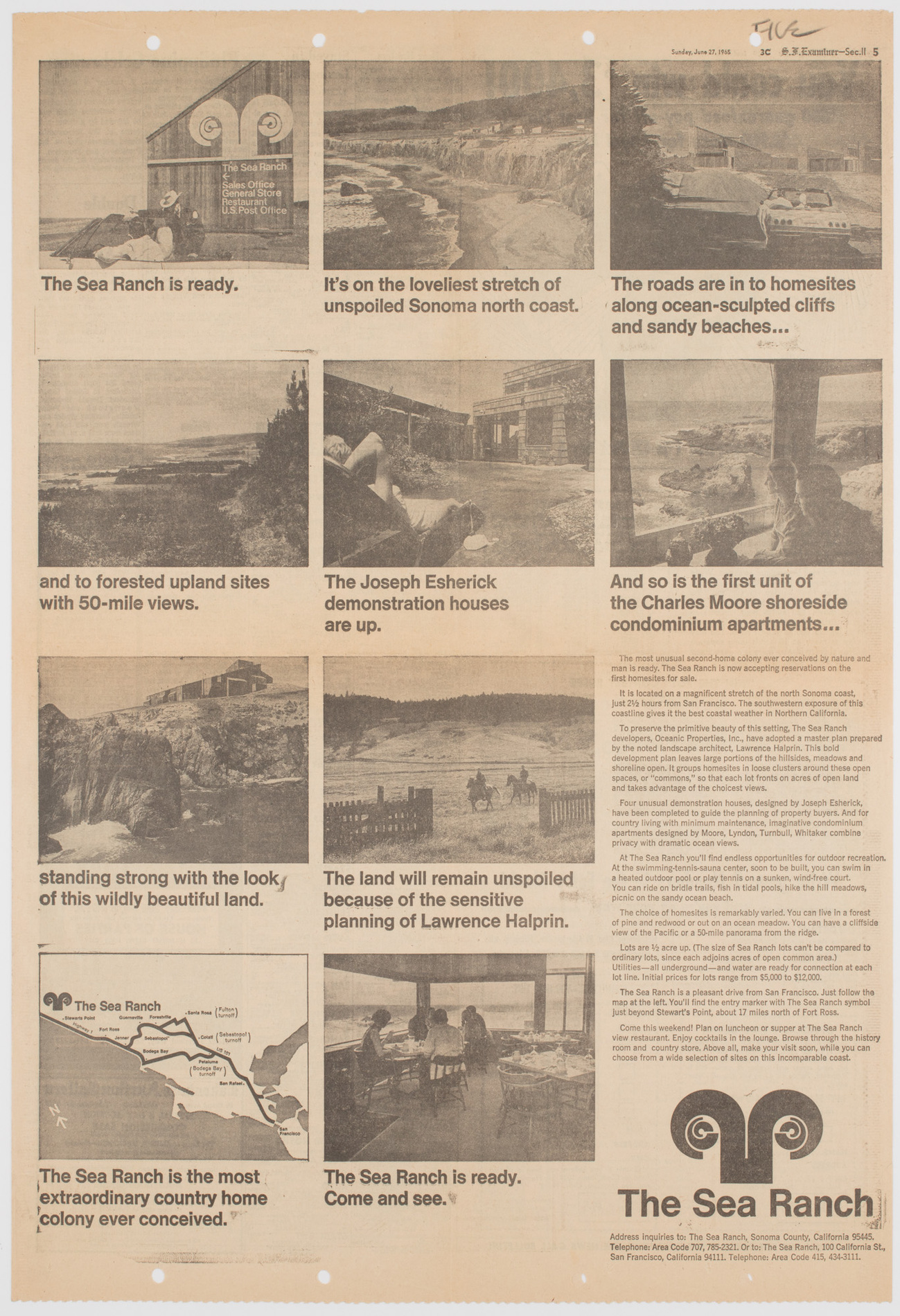 The strict guidelines led to an overarching design style that seems to personify the late sixties and seventies. The first building on the land is no exception. A group of condos, fittingly called Condominium #1, seems to spring from the cliff-side land as if it had been there all along. A single sloping roof volume leans away from the wind, broad windows blurring the line between inside and out. The condominiums inside were of modest size, full of clever design features intended to maximize space. They are reminiscent of the interior of a boat — clad in warm wood paneling, with every nook and corner utilized as storage or bunks, lofts often accessed by ladders. All in service to a unified vision of a place that was “strong without being assertive, simple without being plain, responding to the spirit of the place, its terrain, its climate, its vegetation.” 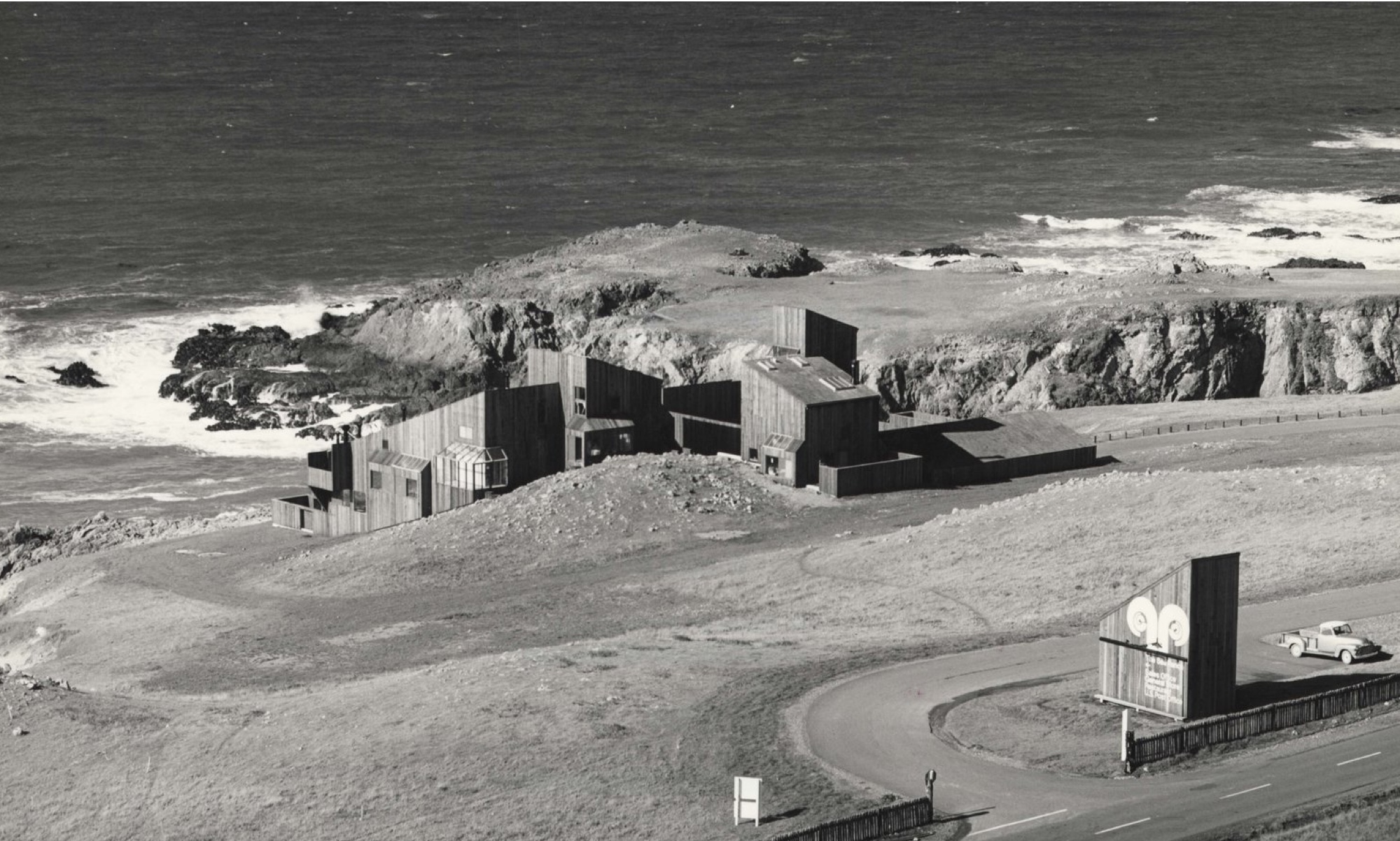 Condominium #1, the first building at Sea Ranch. Via the Lawrence Halprin archive at the University of Pennsylvania. 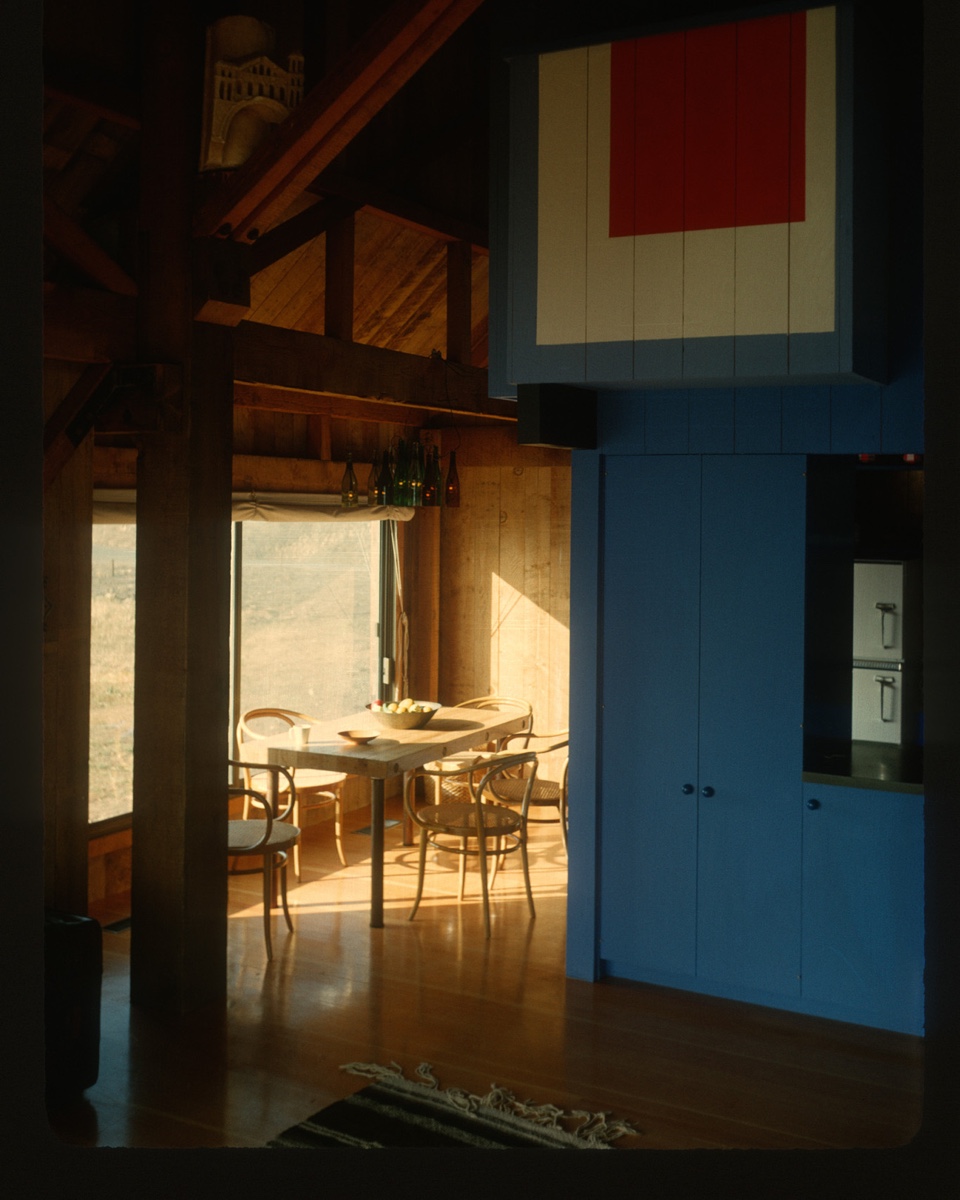 Condominium #1 interiors. Via the Lawrence Halprin archive at the University of Pennsylvania. 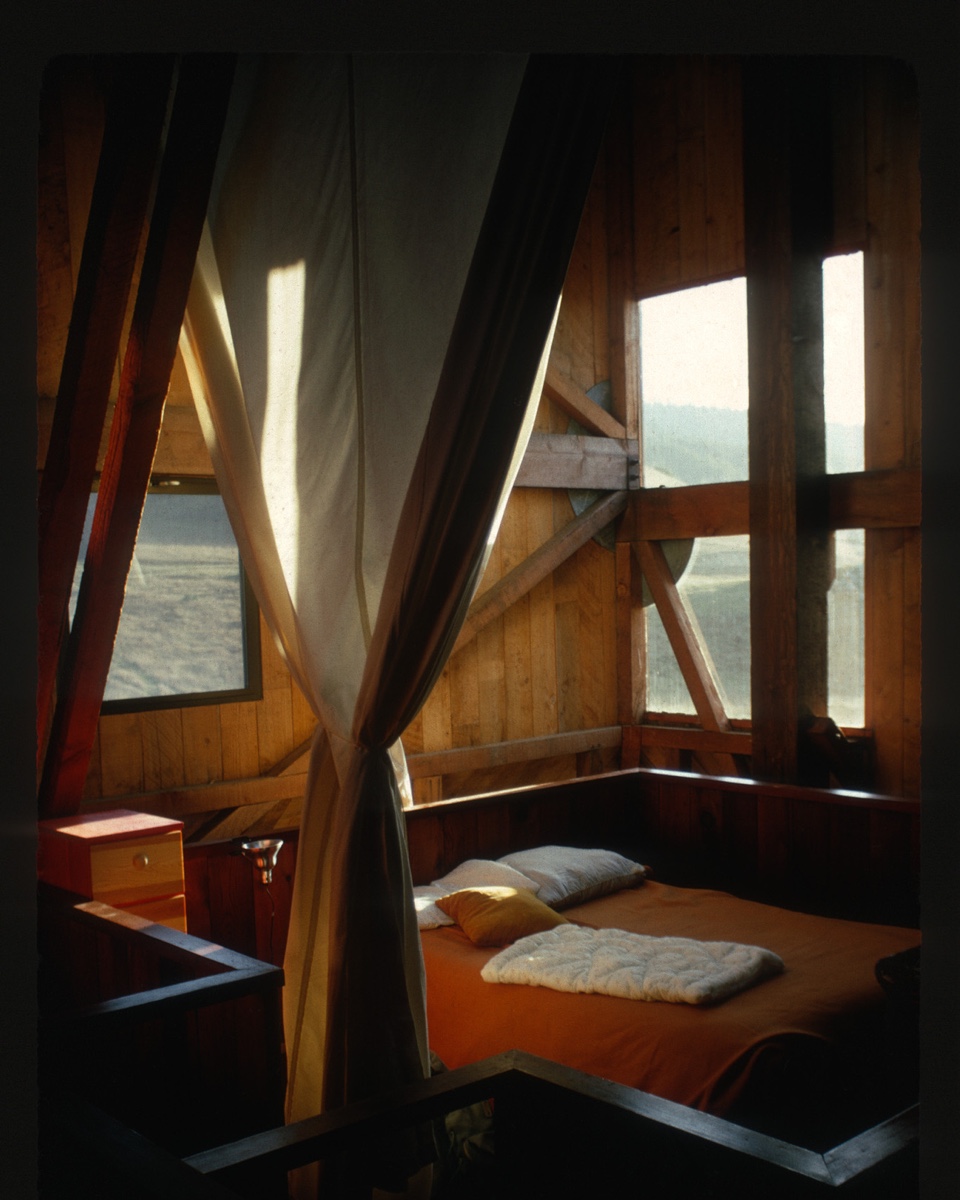 Other homes sprung up in the community. Most were modest — a famous example cost only 25,000 dollars and clocked in at 1000 square feet. The residents tended to fit a certain mold, too. They were intellectuals, left-leaning, of course, and preferred the solitude of Sea Ranch to the noise of the city. A New York Times piece on Sea Ranch describes the typical resident “inclined toward leisurely strolls and reading books in absolute silence.” 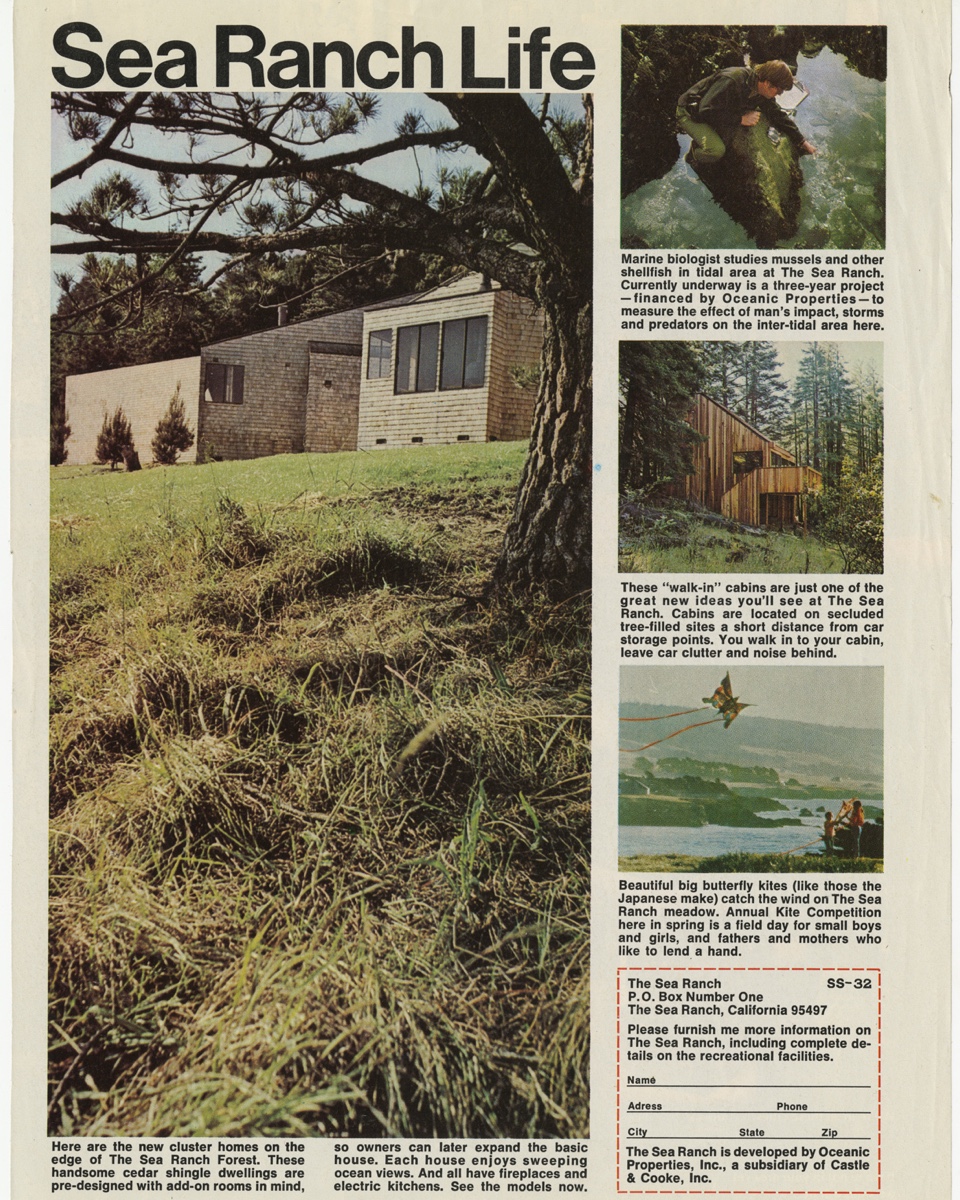 "Sea Ranch Life" via the Lawrence Halprin archive at the University of Pennsylvania. 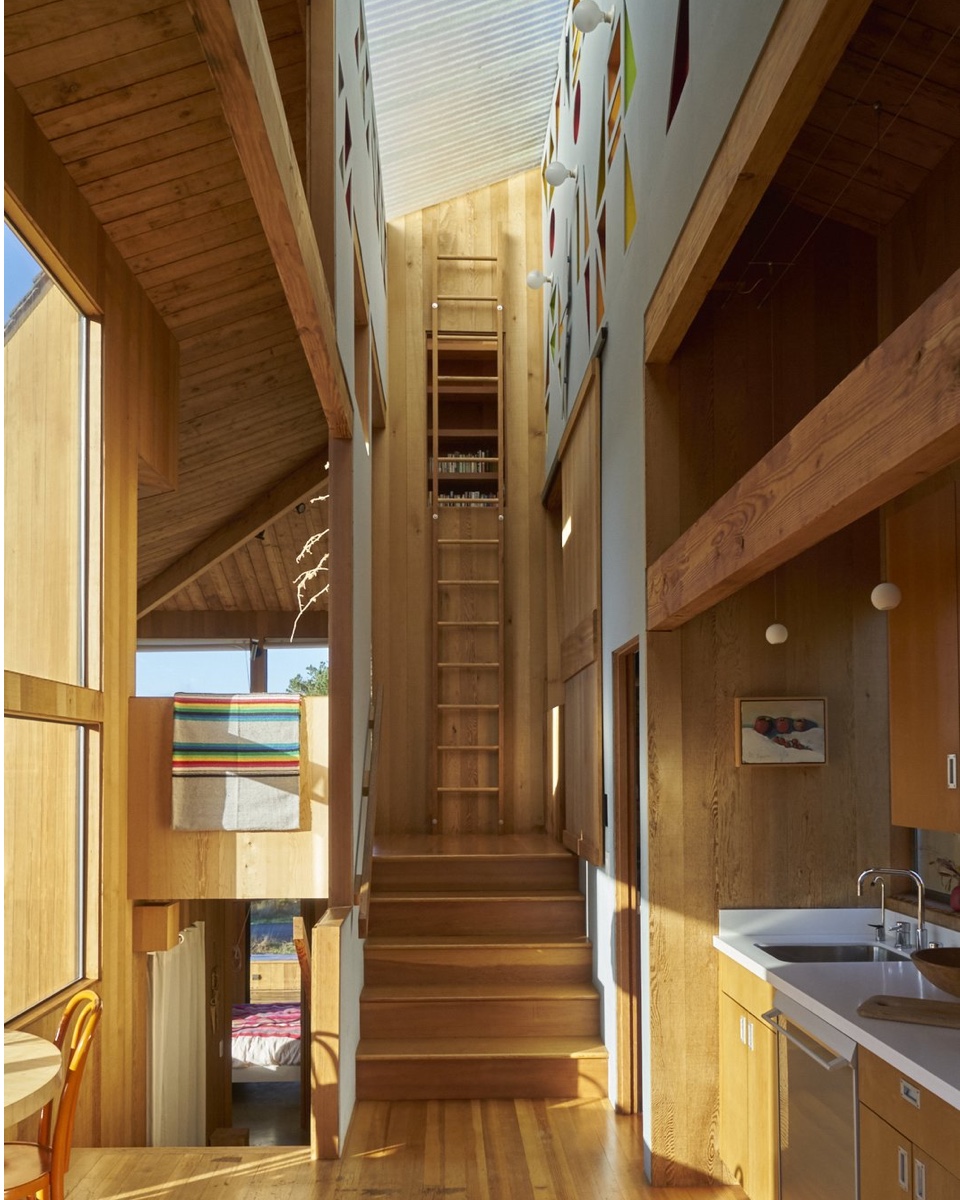 The interior of a cabin built for a family of four for $25000. Via the Lawrence Halprin archive at the University of Pennsylvania.

The environmentally sensitive architecture and landscape of Sea Ranch belied the reality of the community. It was, after all, a development on previously undeveloped coastline. What had once been accessible to locals was now reserved for Sea Ranch owners. That fundamental tension came to a head in 1972, when voters lobbied for Proposition 20 in direct response to the Sea Ranch development. The bill passed, creating the California Coastal Commission and a sweeping new set of regulations regarding public coastal access and land use.

The legal implications for Sea Ranch were complicated. The new agency required certain physical access for the public and also regulated building within a certain distance of the coast — all elements of Sea Ranch’s private & planned appeal. Building on the property was halted for years as the owners tangled with regulators. Suddenly the environmentalists at Sea Ranch were at odds with environmental laws. 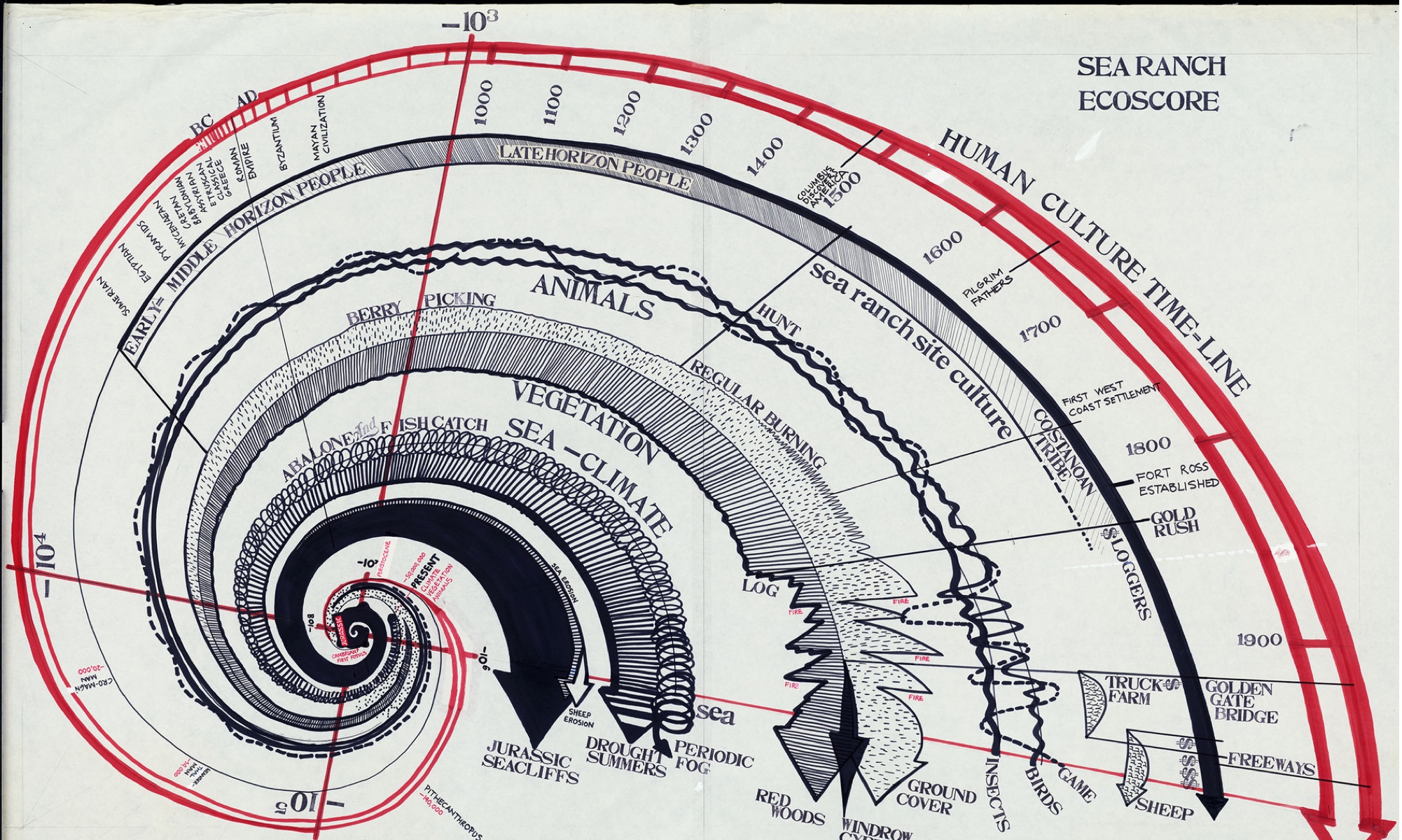 Ecological principles at Sea Ranch. Via the Lawrence Halprin archive at the University of Pennsylvania.

The contradictions of Sea Ranch remain. With the explosion of Silicon Valley and the installation of fiber-optic internet, the demographics have shifted. There are certainly more millionaires at Sea Ranch than the creators envisioned in their utopian community guidelines. But Sea Ranch is still aesthetically simple, with mostly modest homes. Its design aesthetic has inspired a return to simplicity and attention to materials. And most importantly, its eco-conscious philosophy is still serving as a laboratory for the cutting edge of architecture. A kind of utopia after all.

How to Stay Organized in a Studio Apartment
Our best tips for maximizing your small space.
Read