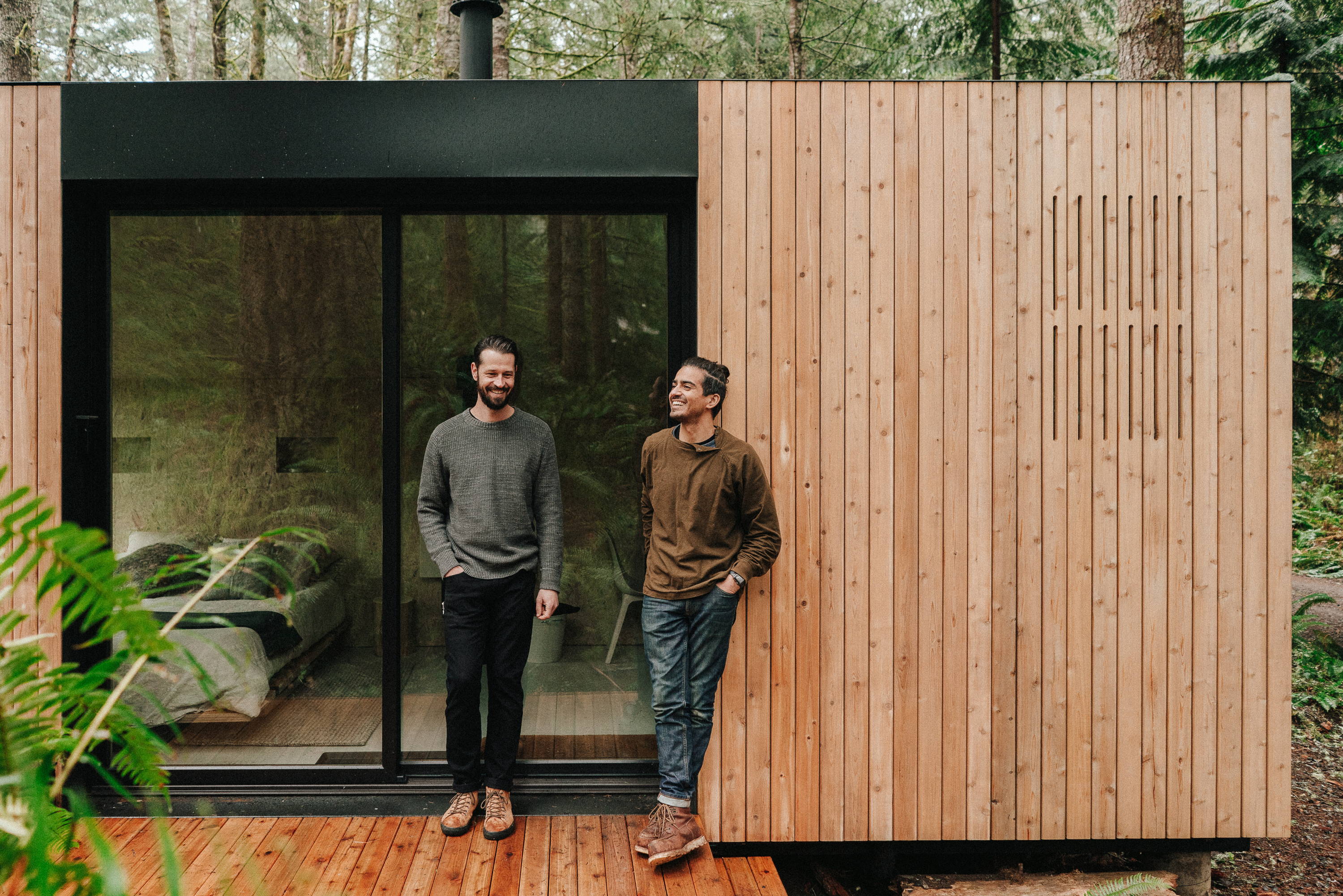 Nestled into the bucolic backdrop of Mount Hood, Oregon, Rico Castillero and Duane Reed built a 20-by-10 foot dream escape. The cabin, which they’ve titled The Woodlands Hideout, offers a restorative retreat and an opportunity to connect with the natural world. We talked to the duo about how they brought their vision to life and what they have in store for the future.

Tell me about your friendship story. Where did this all begin?

Rico: Ironically, our story began about 10 years ago in San Diego. At the time, my partner and I were photographing weddings, and that business is what connected us to Duane and his wife, Sarah. What year was that, Duane?

Duane: I think it was 2010. We were looking for a photographer to take some engagement photos of us, and someone referred us to Rico and Rachel. During that engagement session, we realized we knew a lot of the same people. Sarah and I were actually doing wedding and art photography at the time. Then we moved to Portland in 2017, and that's really when Rico and I reconnected.

What was the impetus for building The Woodlands Hideout?

Rico: This whole thing started back in college for me. I studied architecture at CalPoly SLO and purposefully steered my experiences to be more hands on than most. I was interested in the design/build side of things. I loved working directly with materials and connections, so when it came to designing, I tended to gravitate toward smaller scale projects and even furniture. Graduating in 2006 and then stepping into construction was short lived due to the economic situation in 2008. However, this did serve as a way for me to press into my hobby of photography, and build a career in that alongside my wife. We were very fortunate, and got to travel quite a bit for our work. And while traveling, we got to experience some unique hospitality spaces throughout the country and even the world. That got the ball rolling in my head, as I started to consider designing and building spaces of our own. Our trajectory began shifting as I started utilizing my design and build background to create short term rentals. Building these spaces proved successful, but a part of my soul still longed for a more nature-focused experience. So in June of 2017, we bought the property where The Hideout now sits, and I began refining my designs of what would turn into a ground-up build. 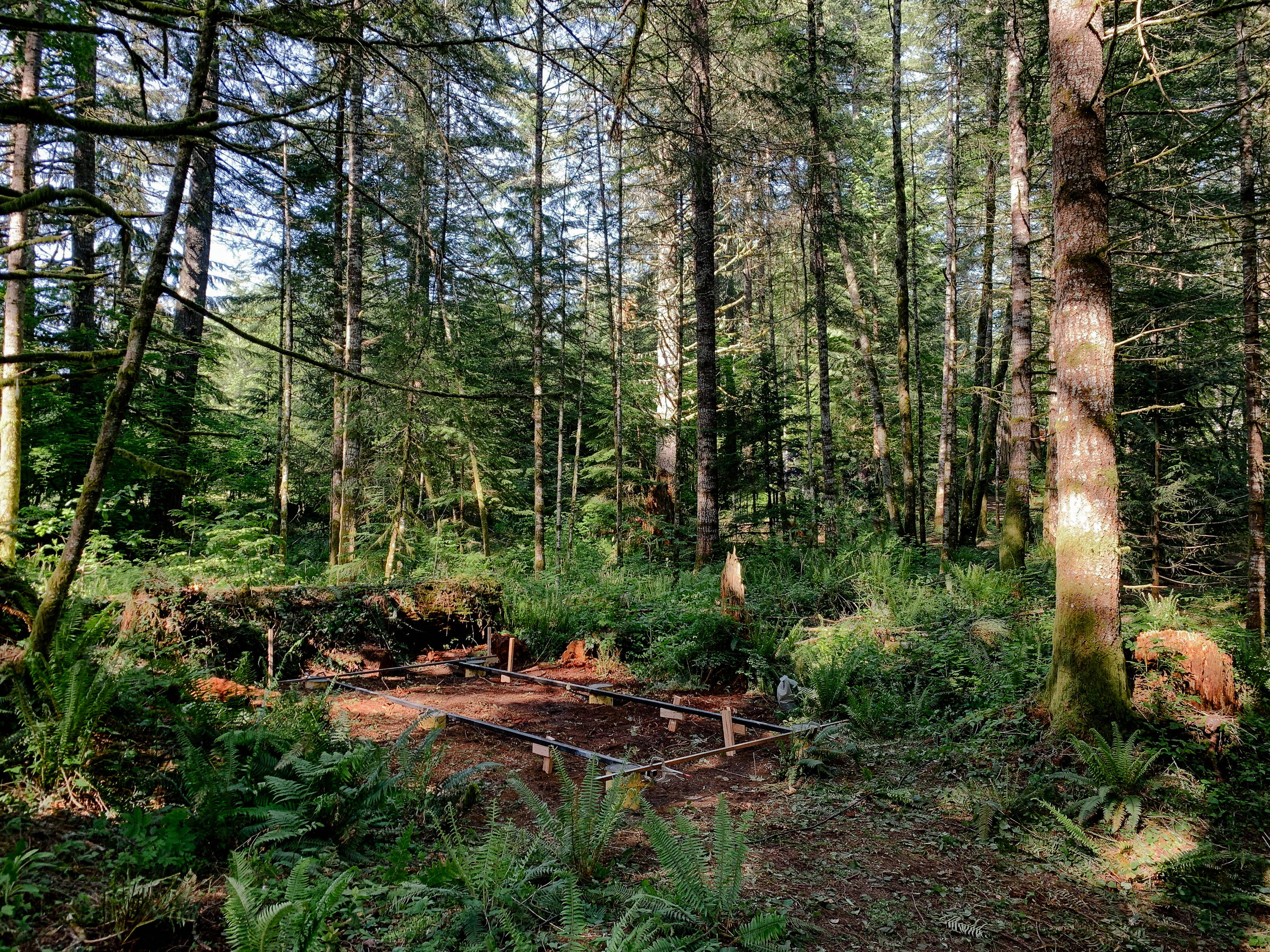 Why did you decide to collaborate and what was your collaboration style?

Rico: I knew that Duane and Sarah lived in the area and were working on flipping a house at that time. That clued me into Duane’s skill set, so I reached out about collaborating on The Hideout build, as I knew I wouldn’t be able to do it completely by myself. We agreed to partner up on an initial prototype build in early 2019, and then after locking down the design together, we began construction later that year. The vast majority of it was built primarily with our own four hands, which is pretty cool now, knowing that we've touched every part of it.

Duane: For me, it was especially refreshing, as I had been doing a lot of interiors, residential type renovation and remodeling. A lot of my projects were starting to feel the same. So, being out in the woods and building something that felt more connected to nature was really special. 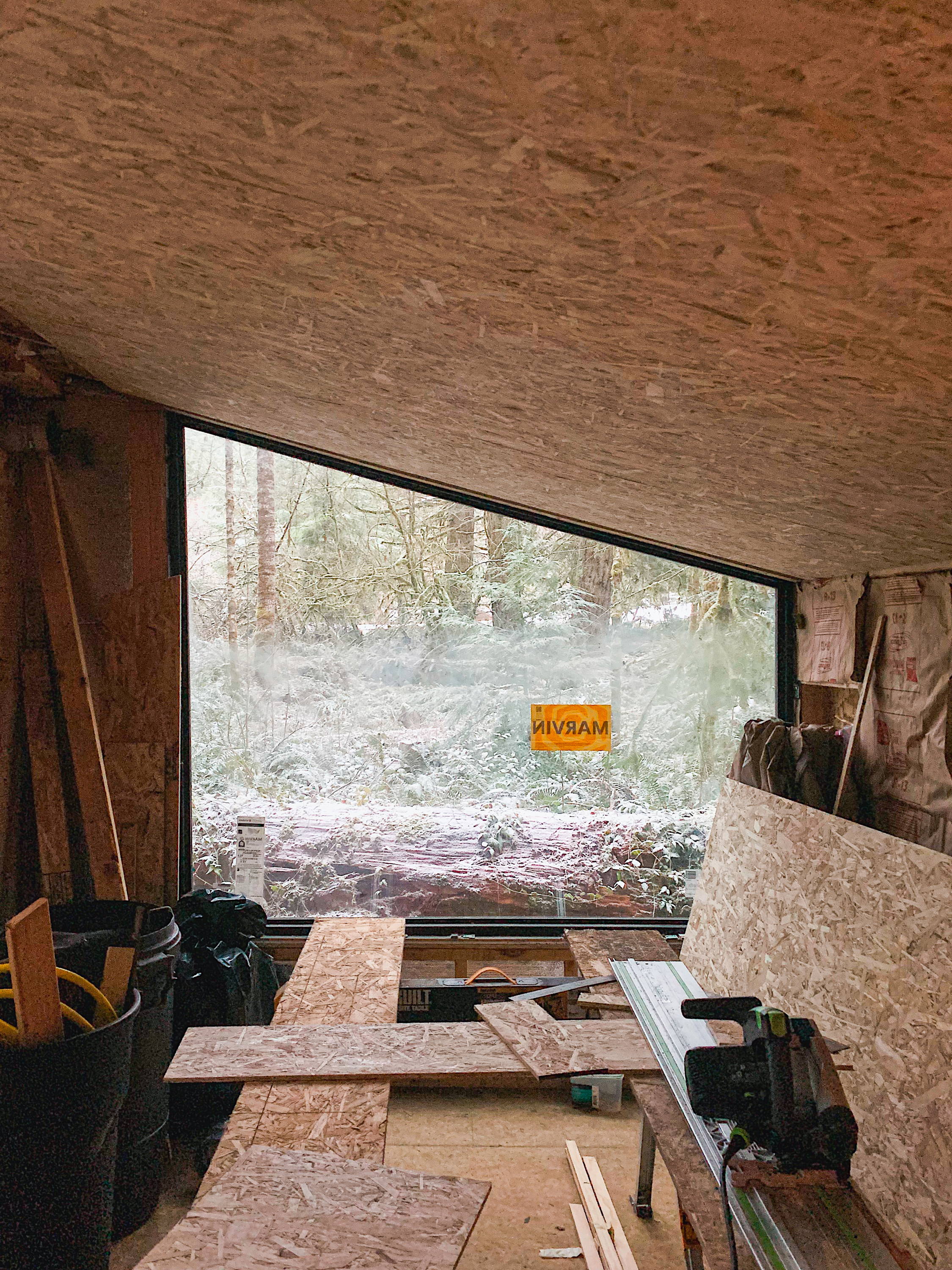 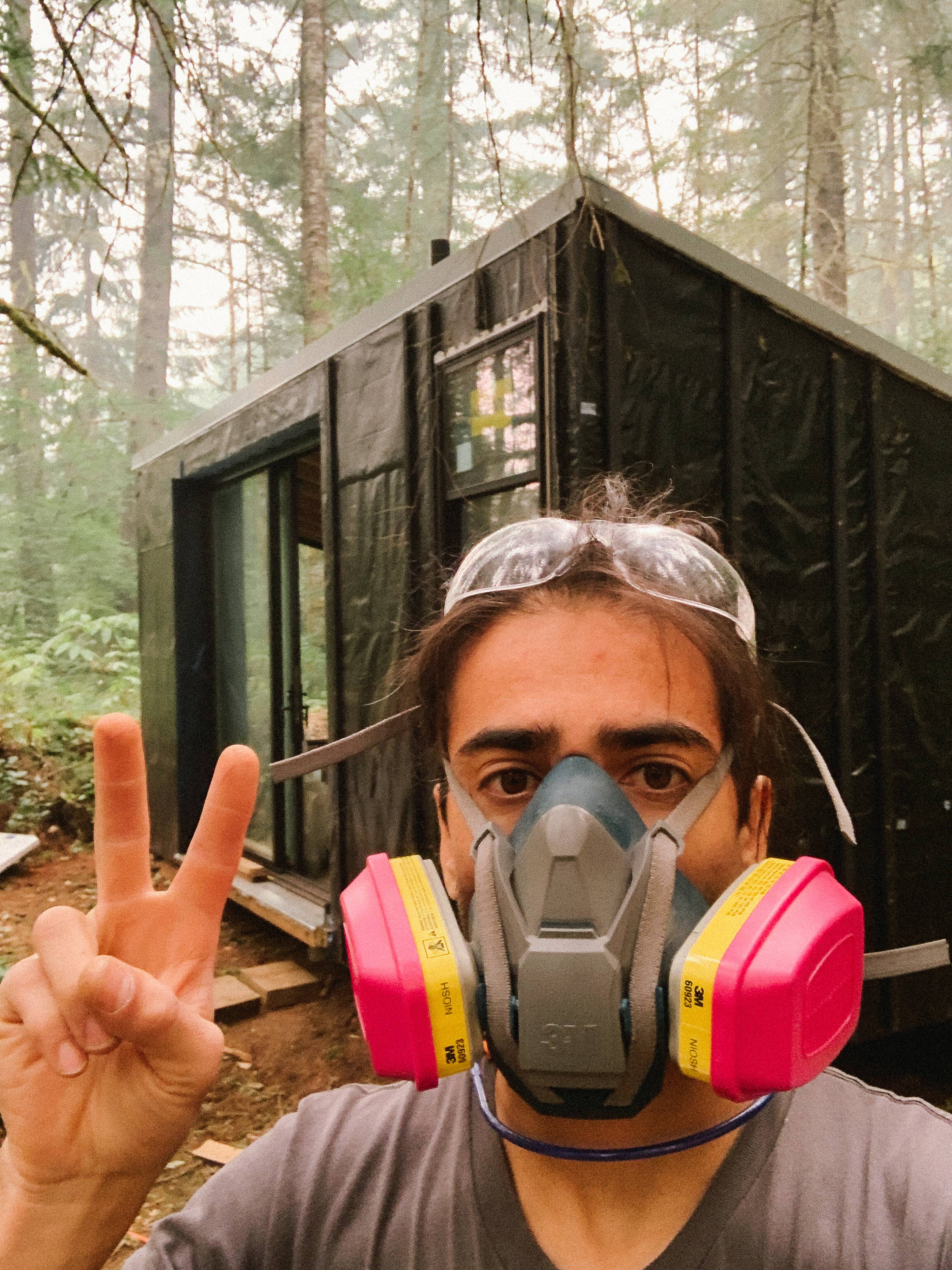 Can you take me through some of the specific design decisions you made?

Rico: At that point, the intention was somewhere hovering around building a small cabin. At such a small scale, I felt like I could wrap my head around all of the aspects of it. One of the biggest design intentions was making a very small space feel expansive and trying to stay within a certain size that we felt was reasonable to transport. So that became our physical design constraints. Knowing the property and the nature of the weather, having a sloping roof was pretty important for maintenance reasons and for the success of the structure. Then it was all about figuring out what we could do on the short side of the building. That really started dictating the floor plan quite a bit. We see a lot of cabins in the woods that have a very rustic feel, which is charming in its own right, but we wanted to create a space that was simple and minimalist and more about the outside than the inside. That was a pretty considerable guiding principle. The cabin wasn't meant to have a super luxurious finish; it really was meant to be more utilitarian. We didn't want to create visual distractions that bring attention to the space.

What kind of materials were used to construct The Hideout?

Rico: When it came to choosing exposed materials, we tried to minimize the number of different materials to aid in the simplicity of the space. We ended up choosing materials that were honest to what they were and served a specific function. Even though the OSB (oriented strand board) we used on the walls, ceiling, and cabinetry, isn't typically used as a finish material, we love its texture and warm tones. Additionally, in the bathroom and shower, we used a material that rarely gets left exposed, but instead is what some internal boat parts are made of due to its waterproof, lightweight, but strong nature. With a little bit of sanding and a sealer to make it more wipeable, it turned out to be perfect for our use case. 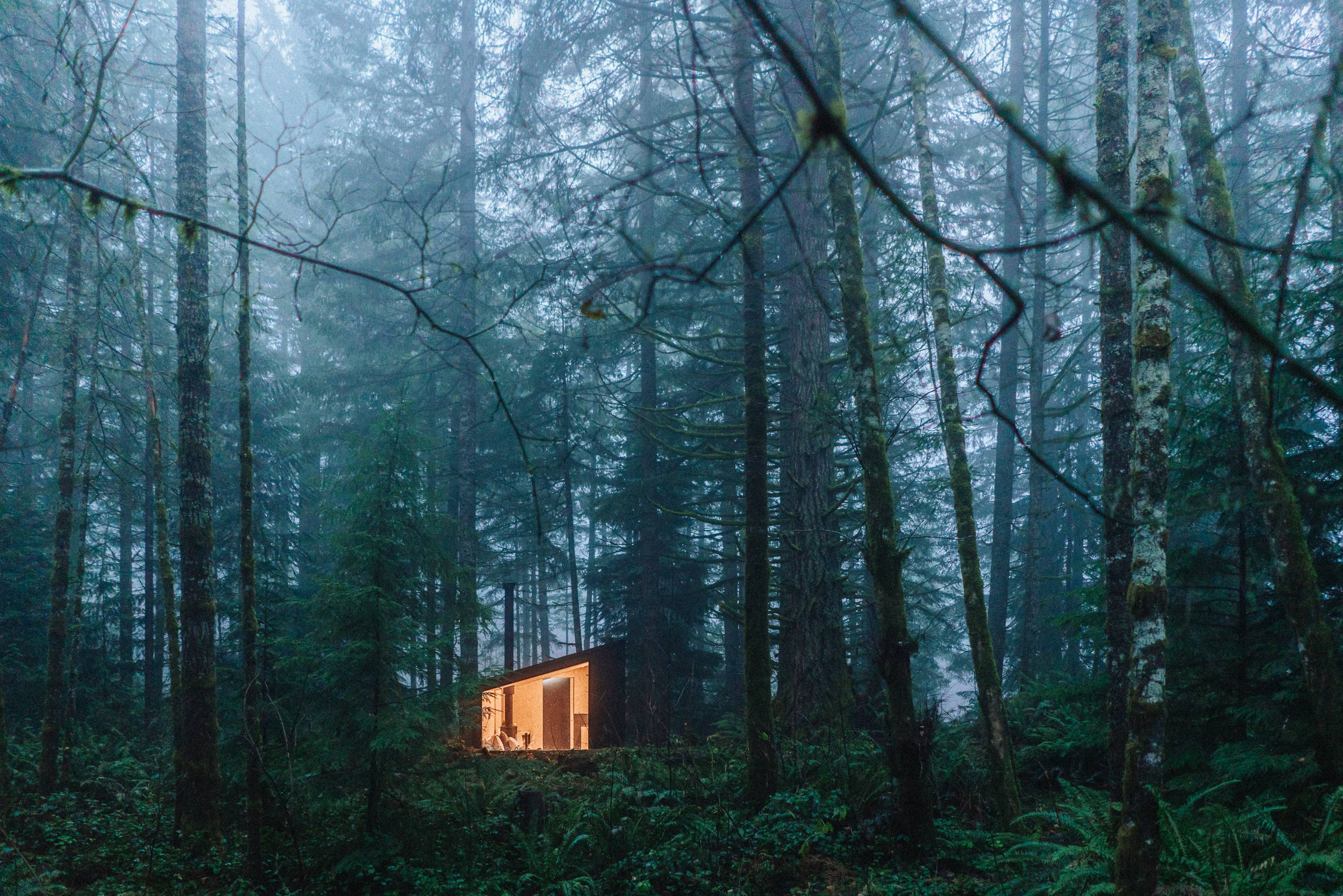 Why did you decide to incorporate Floyd products into The Woodlands Hideout?

Duane: We really love the simplicity of Floyd's products and the aesthetic. Their whole vision is really cool and something that I loved. We talked about not really having any furniture in The Hideout and many things being built in. But I feel like we kept coming back to Floyd because of its simplicity. It seemed like something that could really become a part of the space.

Rico: I like that they created a product with components that can be utilized together. Your design and production efforts can go into a certain type of attachment connection that can help bring things together and make a beautiful piece of furniture that's functional and durable. The utilitarianism of their products is connected with our design approach for the space, too. Floyd also seems to be interested in promoting artists and designers as well. They're trying to build a community. So it felt like there was some good alignment with our intentions for the space. 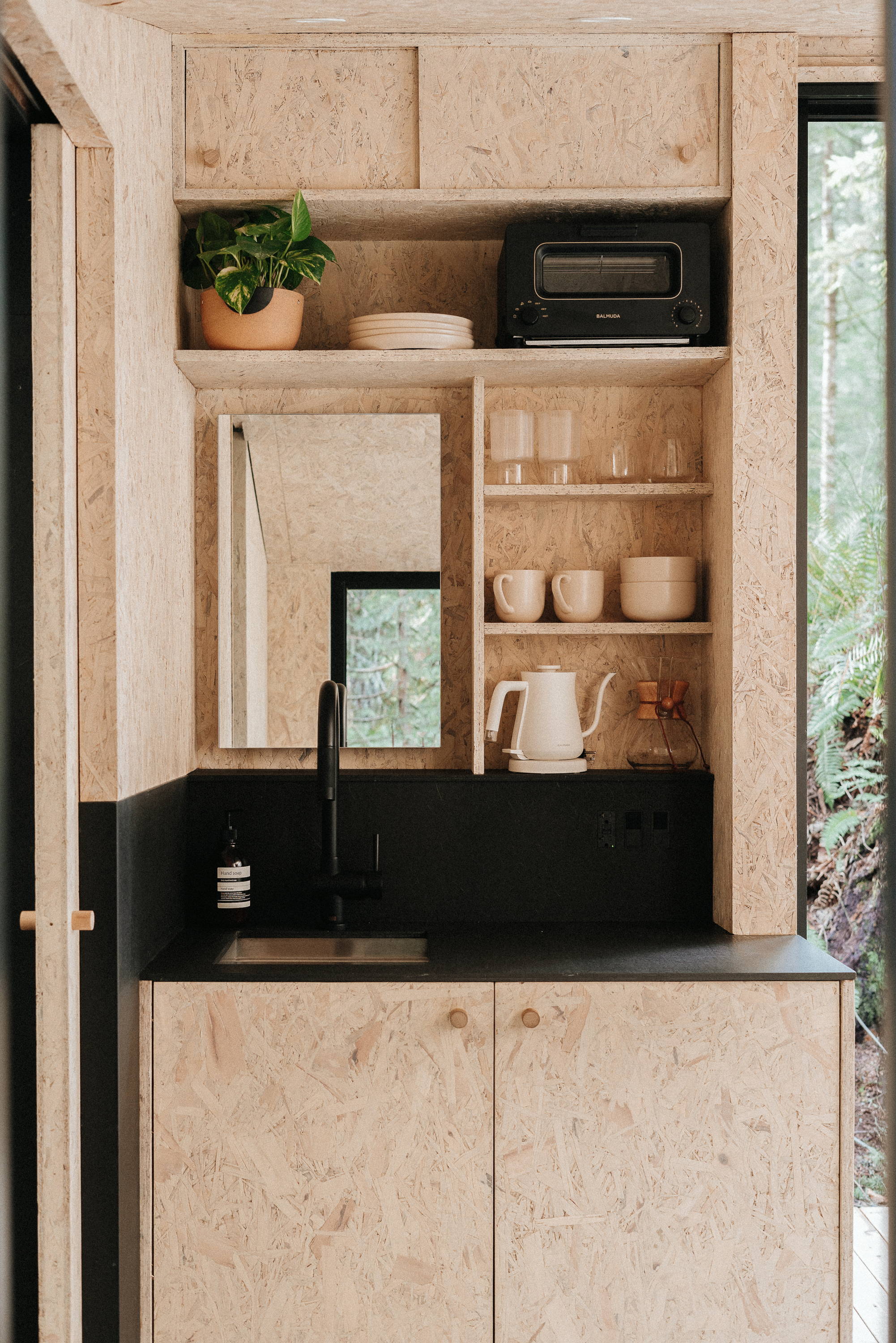 Tell me more about The Hideout’s philosophy of unplugging. There are a lot of ways to unplug. Why build a unit as a way to do that? And what kind of experience do you hope that people have during their stay?

Rico: For me, the intention was to hone in on a space that is more set up for a solo disconnect retreat. It was about creating a space that felt safe enough and had a certain comfort level. But it was also about trying to create a space that was accessible, meaning you didn't have to bring a bunch of gear to disconnect. And then also thinking about creating a space that would allow for extended stays, leaning toward creatives and artists looking for a space to disconnect, furthering their journey and art. I feel like it helps humanity produce more beautiful things. So that connection was pretty foundational: setting up a space that could work in all seasons. It bridges this gap between the rustic experience in nature and having all the comforts and amenities of a hotel. 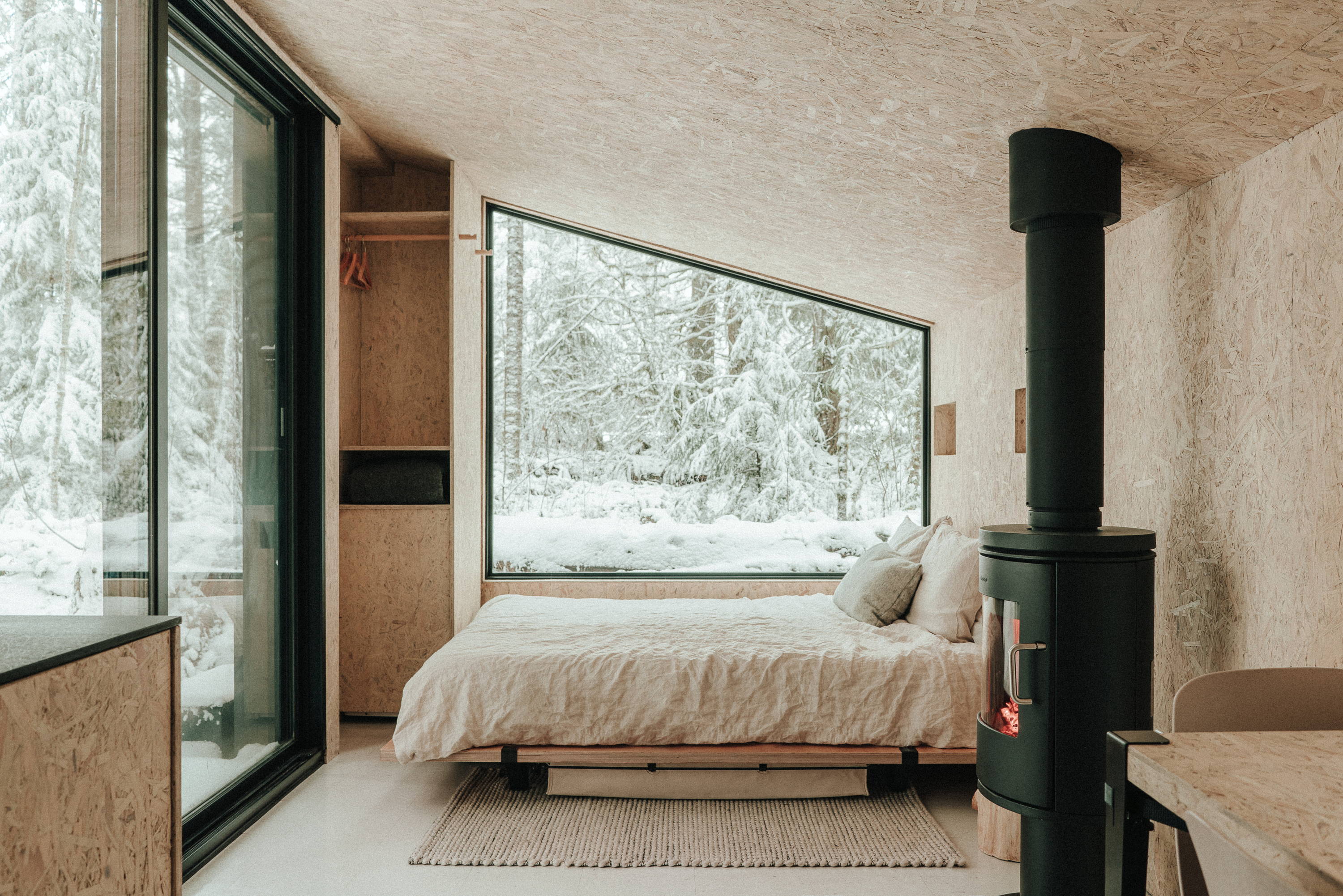 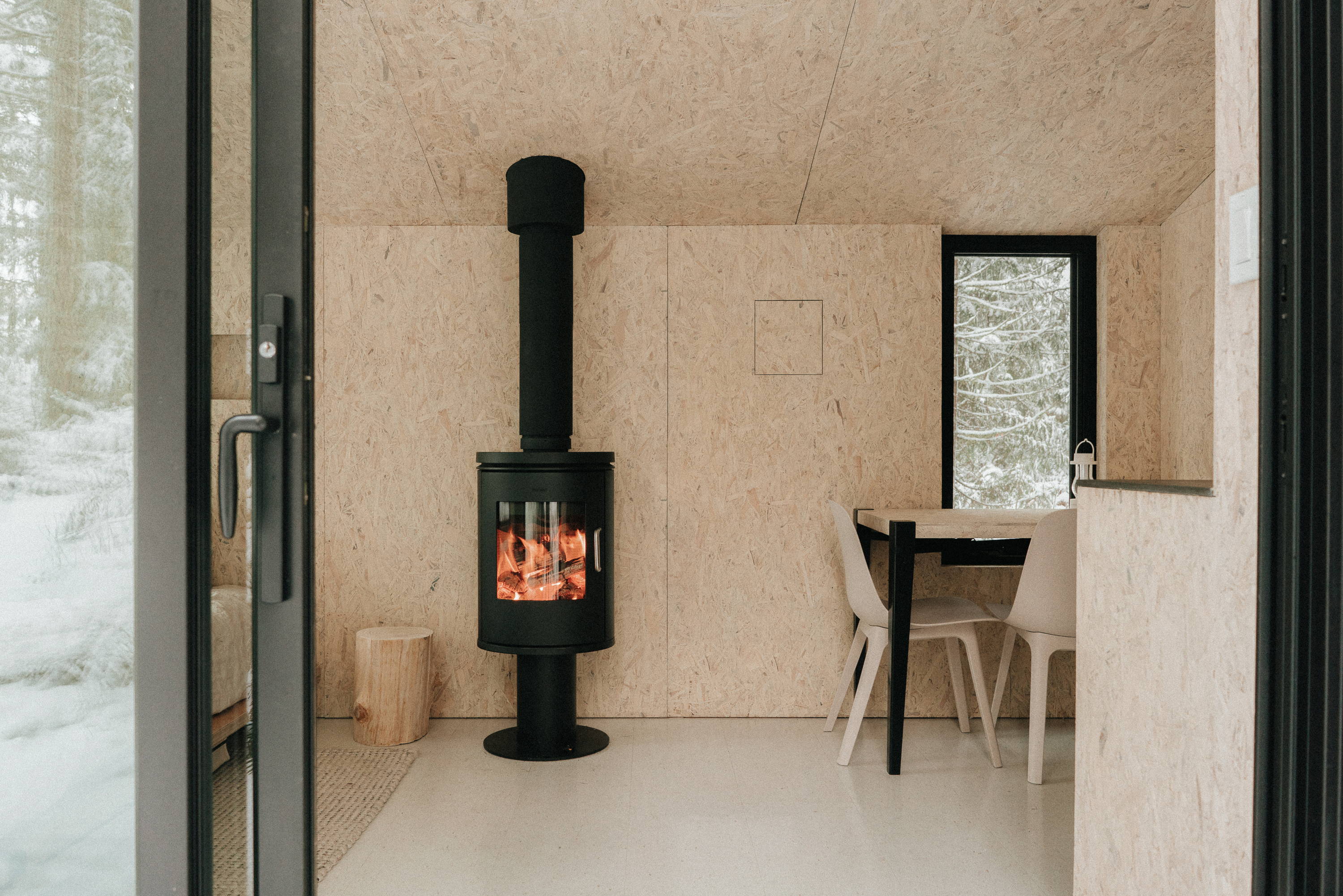 What can you tell me about the significance of this piece of land, in particular?

Rico: The physical location is out east towards Mount Hood. And I think the uniqueness of this particular piece of property was how old the trees were. You can see that these old-growth trees have survived fire, and they're still there. We're able to see the intelligence of an ecosystem and how everything is connected. Being around those old-growth trees, you feel something that's so much greater and more complicated than you that it’s grounding just to be there. When you think about it, we're all made up of the same stuff. One of our guests was a woman in her seventies. She loved looking out the window and seeing what she called a host tree. A host tree is a tree that has fallen and has become one with the ground. There's life growing from it. It provides the energy and the nutrients for more life to grow out of it. And she had the wisdom and awareness to say that her goal is to become a host tree, to become one with the Earth. She wants beautiful things to grow from it. That's really what it's all about: to clue us into that connective cycle.

Duane: We didn’t build The Hideout as something that everyone can be like, this is so cool or well designed. Those things are nice, but it's really about whether we can create an experience for people.

What's next for you both?

Rico: We've spoken a lot about what it means on a deeper level. And so trying to further that is really what Further is about. We're trying to figure out how to expand this experience to more people. The hope is that it can be a creative community as well, where people find their inspiration in nature. I feel like part of the conversation has always been, how can this grow? How can this be something that's scalable? There was always talk that this likely won't be the last thing we build together.

For more about The Woodlands Hideout please check out: