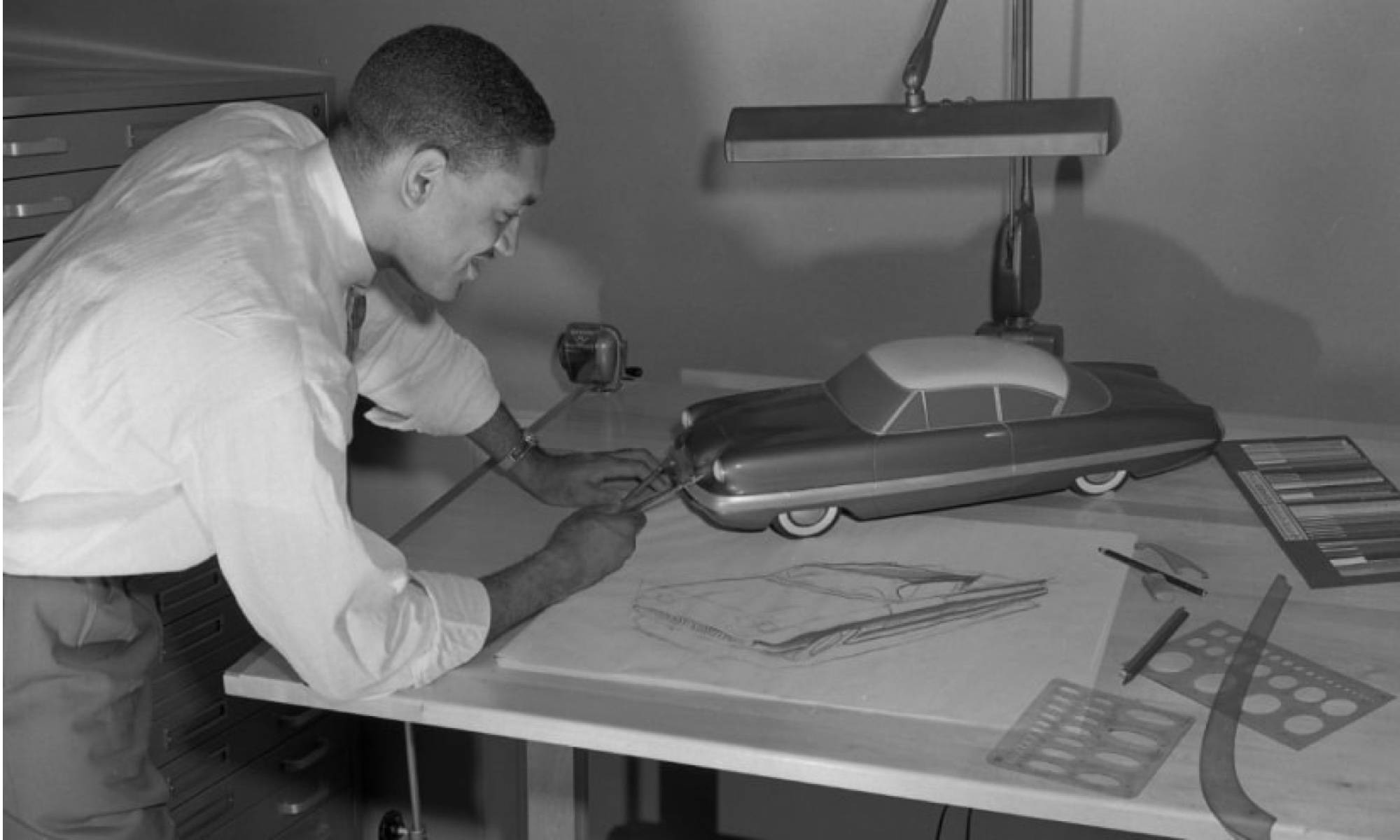 The designer behind Ford's most iconic cars. 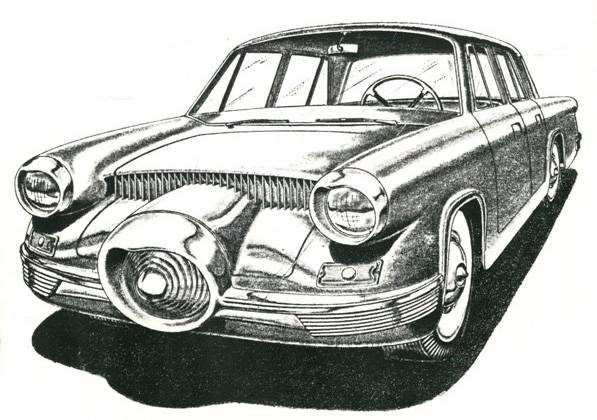 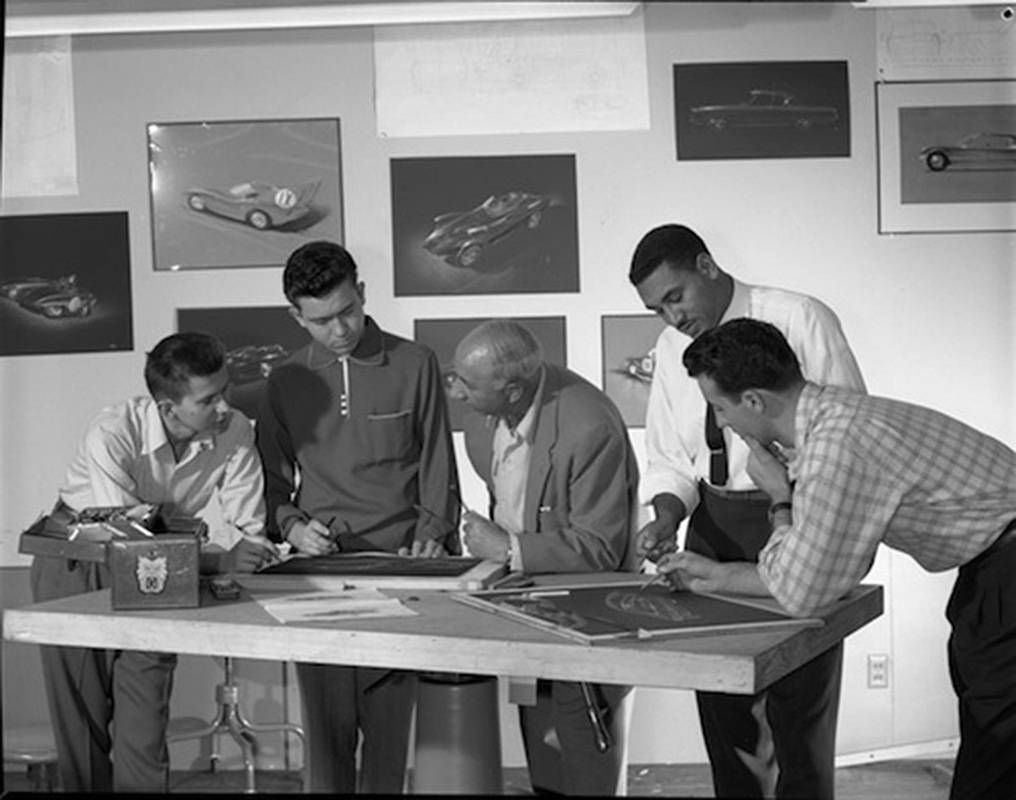 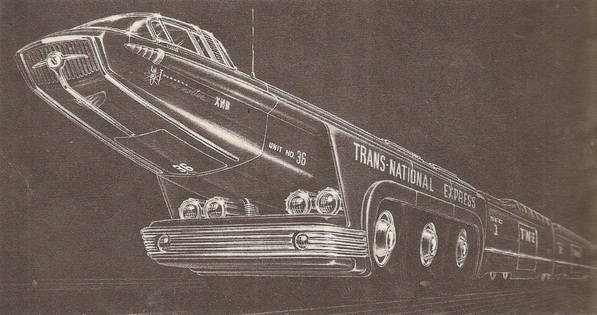 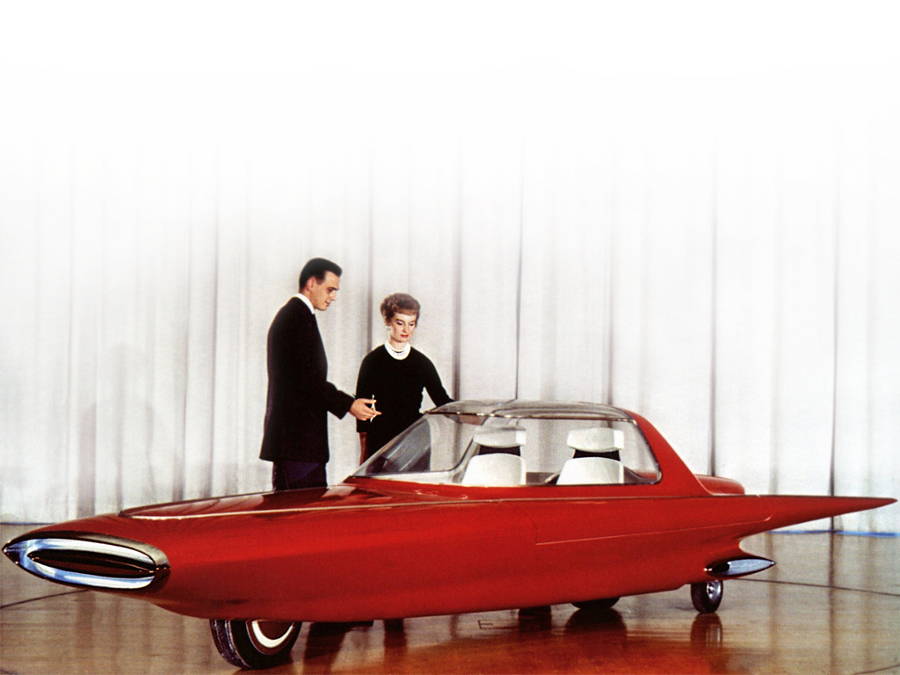 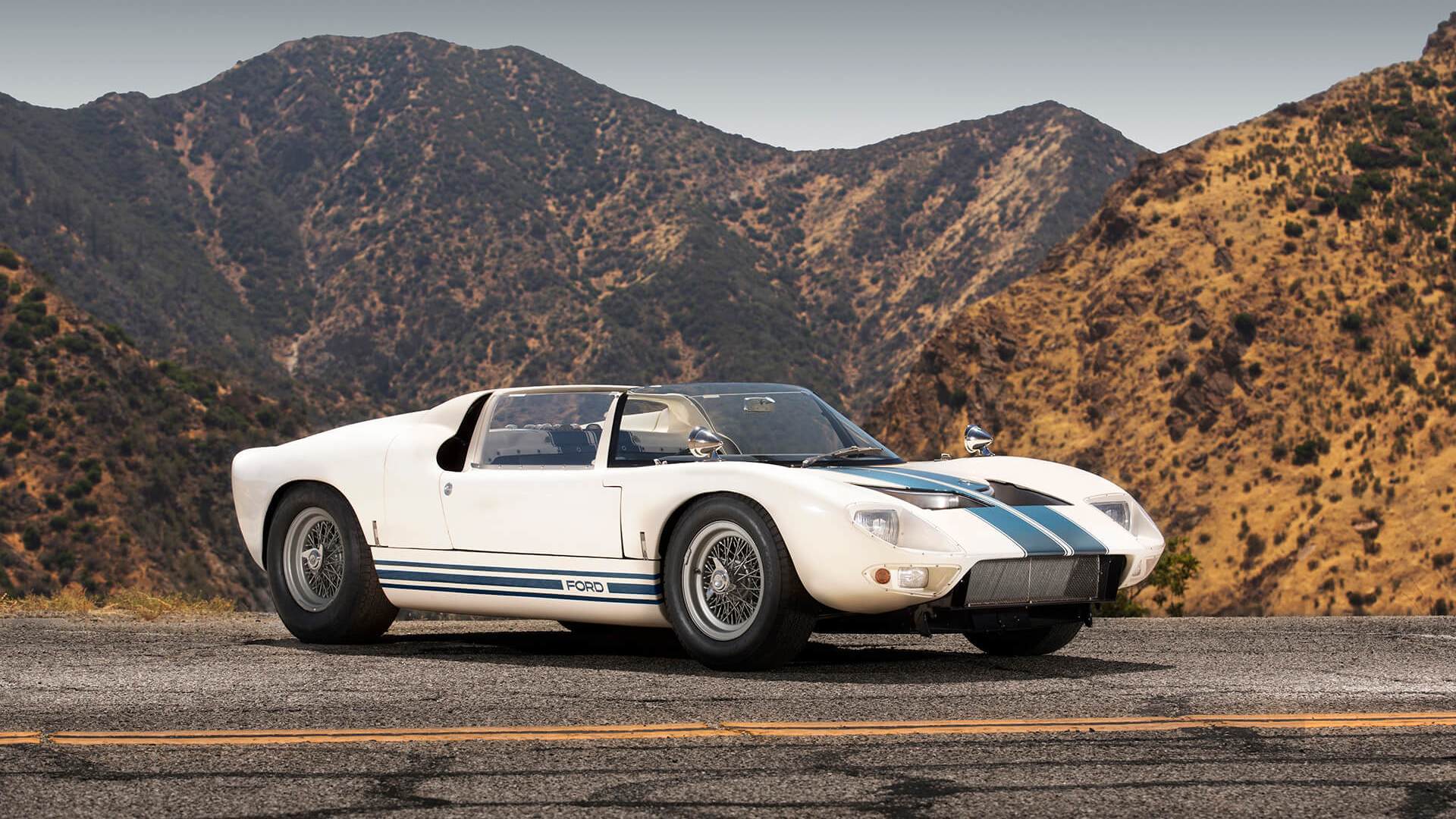 1. Header image: McKinley Thompson Jr. at a drafting table. / 2. The design that won Thompson the Motor Trend contest — a turbine-powered car. / 3. Thompson, second from right, at ArtCenter College. / 4. A design for a nuclear-powered tractor trailer. / 5. The Ford Gyron. / 6. The GT40 racer, which was built to beat the dominant Ferrari racecars.

In terms of iconic product design, the Ford Bronco is a standout. First released in 1964, the Bronco has made a lasting aesthetic impression.

You still see vintage Broncos here and there, and with the 2021 launch of the new Bronco, it’s clear the burly vehicle continues to capture our fancy. But the story of the Bronco’s designer is no less interesting than the vehicle itself.

From War Engineer to Winning an ArtCenter College of Design Scholarship

McKinley “Mac” Thompson Jr. was born in 1922 and raised in New York. It didn’t take long for him to discover the world of automobiles — in an interview from 2001 he recalled seeing a DeSoto Airflow at the age of twelve “It just so happened that at that moment the clouds opened up for the sunshine to come through. It lit that car up like a searchlight. I was never so impressed with anything in all my life. I knew that’s what I wanted to do—I wanted to be an automobile designer.”

First, Thompson had to hone his drawing skills. During World War II, he served in the Army Signal Corps as an engineering coordinator and draftsman. In 1953, Motor Trend magazine hosted a “From Dream to Drawing Board to ?” design contest. Thompson won — and as part of his prize received a scholarship to the ArtCenter College of Design in Los Angeles. He was the first Black student in its Transportation Design department.

After graduating in 1956 with a degree in industrial design, Thompson was hired by Alex Tremulis. Tremulis ran the Advanced Design Studio at Ford Motor Company, where the team was given free reign to explore futuristic and far-fetched concept designs on behalf of the automaker.

Thompson was the first Black designer at Ford, and the Detroit Free Press once called him “the Jackie Robinson of car design.”

Thompson’s work fit right into the forward-looking team, though some of his designs were more far fetched than others: one design for a nuclear-powered tractor trailer is particularly fanciful. But, of Thompson’s early work on the team, his best known concept was the Ford Gyron, a three-wheeled car inspired by the shape of military aircraft.

From the Mustang Coupe to the Bronco

Throughout the sixties, Thompson shaped some of the most legendary Ford vehicles. He was instrumental in the development of the first Mustang coupe, the GT40 racer (of Ford vs. Ferrari fame), and Thunderbird models in the early part of the decade.

In 1962, he received the ‘Ford Motor Company Citizen of the Year Award’. Meanwhile, Thompson’s early concept sketches for the Bronco informed much of its still-recognizable design language. The four-wheel-drive SUV was launched in 1964 and quickly became popular among consumers for its style and its utility as a work vehicle. 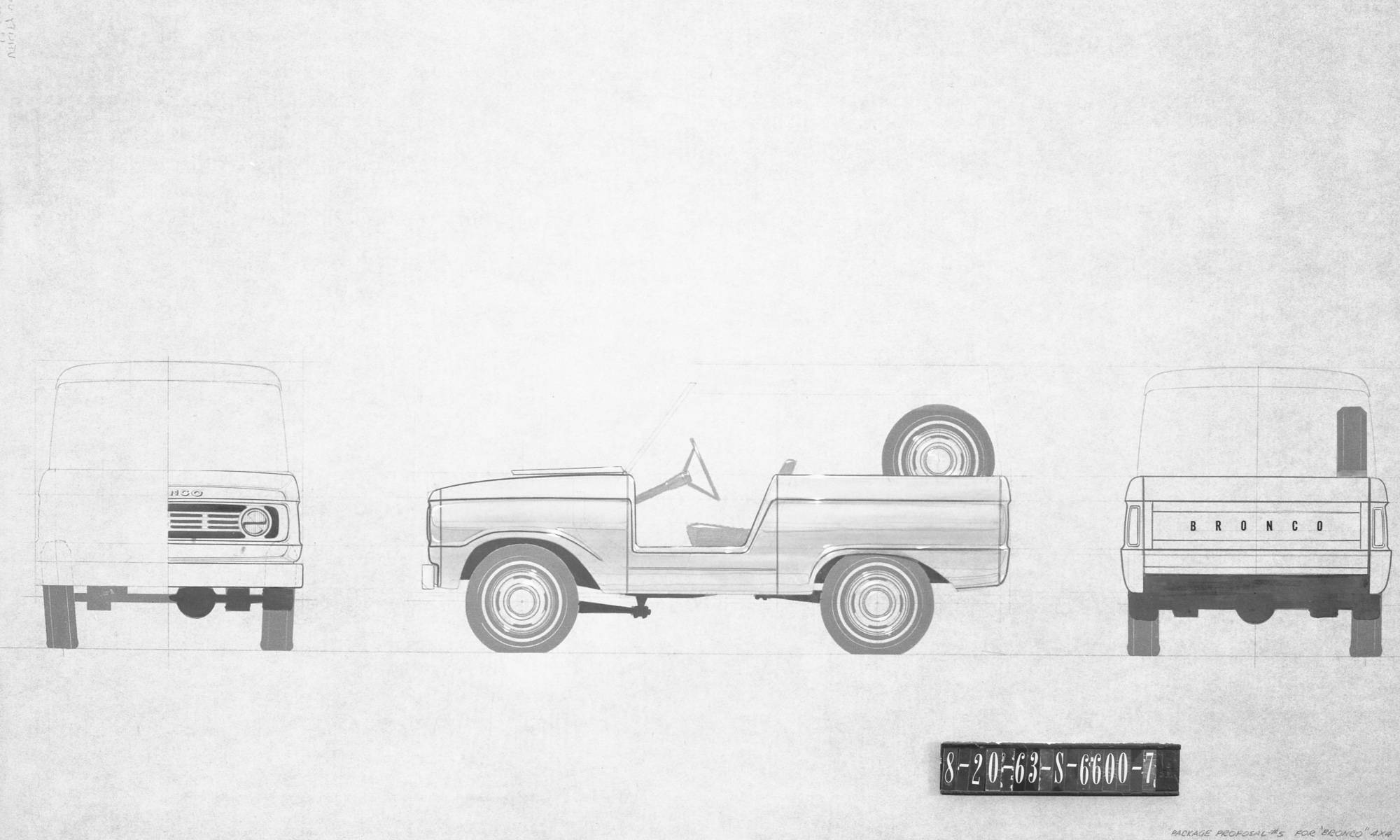 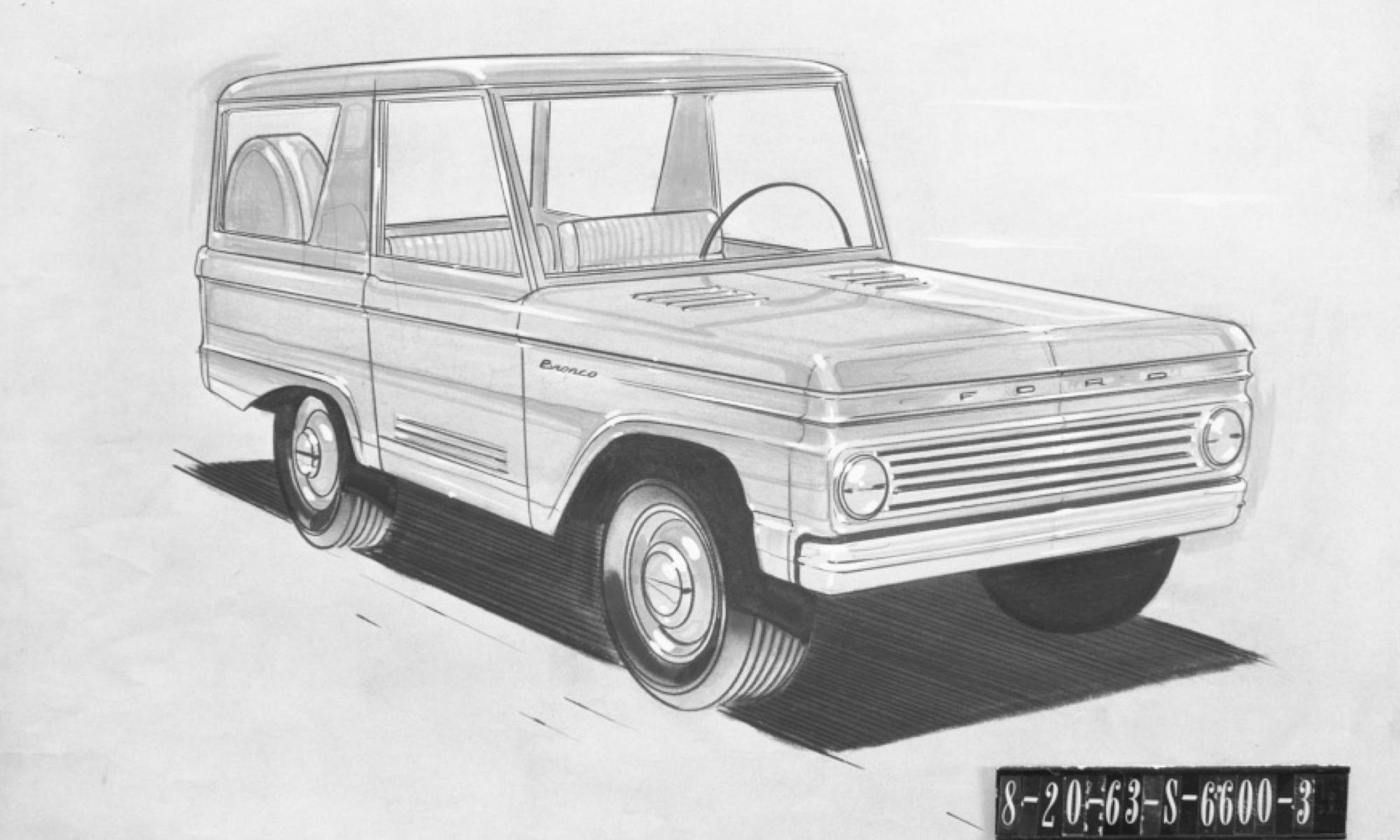 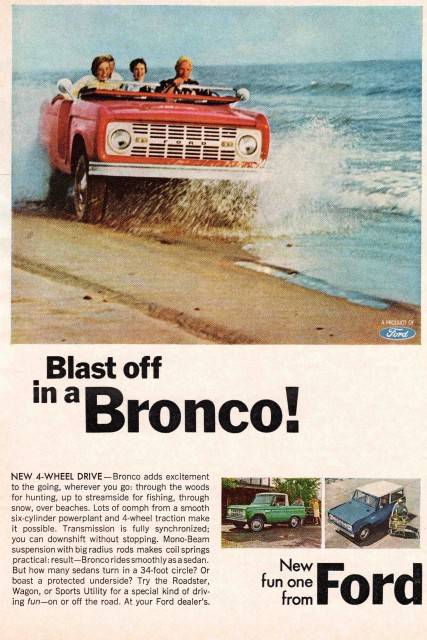 Thompson rose in the ranks at Ford until he retired in 1984 as the manager of Ford’s Appearance Development and Feasibility Design Modeling Department.

Working Toward a Car for All

While he took a step back from the auto industry, he didn’t stop dreaming. He spent the next ten years working on a concept car called “The Warrior”, which used a light fiberglass body that was strong yet easy to produce.

Thompson hoped that the vehicle could be a low-cost product for developing countries. While the vehicle never reached production, it’s clear that Thompson’s fascination with alternative materials and streamlined production was ahead of its time. But that’s hardly surprising. One wouldn’t expect anything less from the Jackie Robinson of car design.

Related Posts
nathan-johnson-space-age-style
remembering-enzo-mari
This willl be hidden in site and replaced with the corresponding posts.