Founder Interview: How a Furniture Leg Sparked a Company

An Oral History of the Floyd Leg 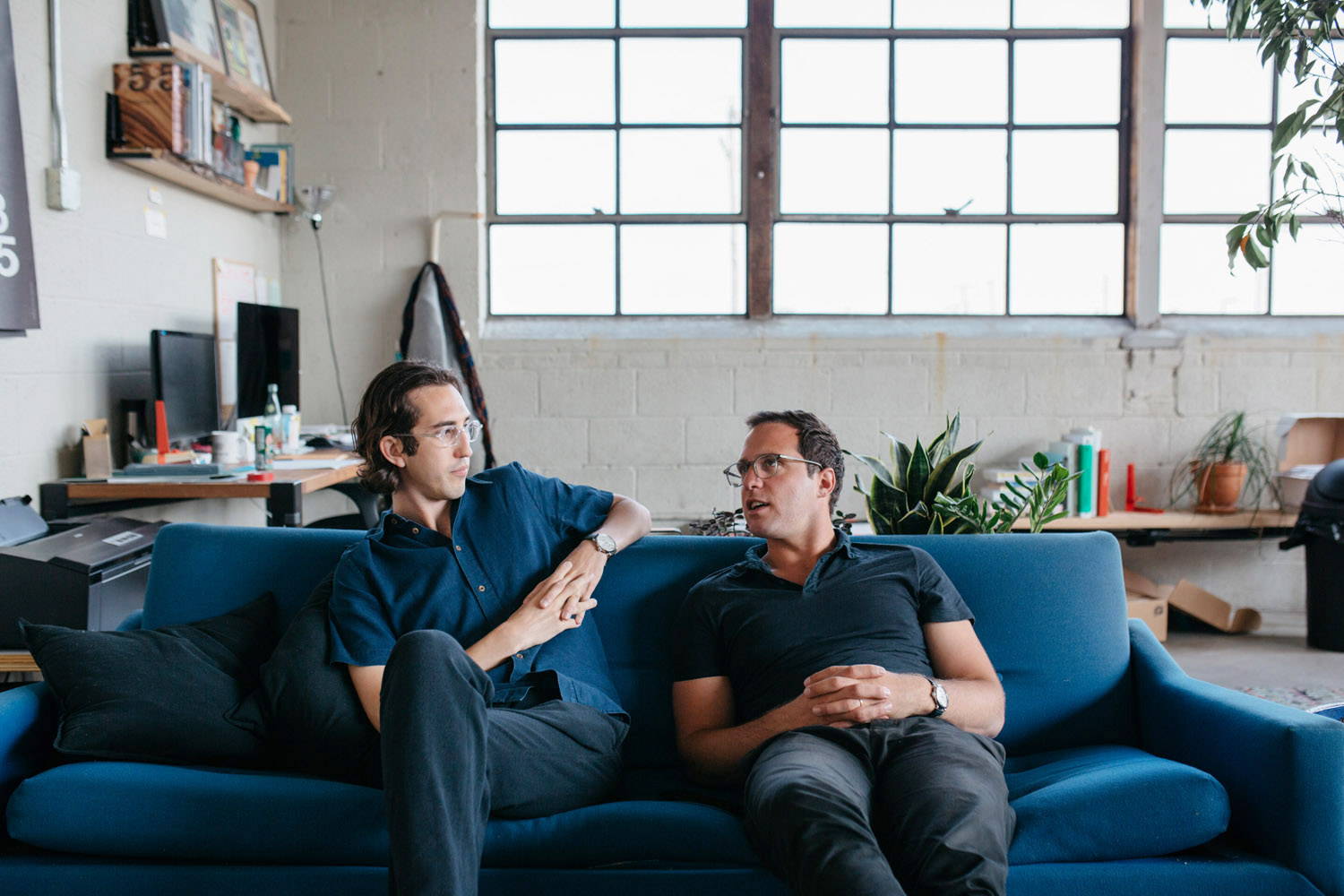 An Oral History of the Floyd Leg 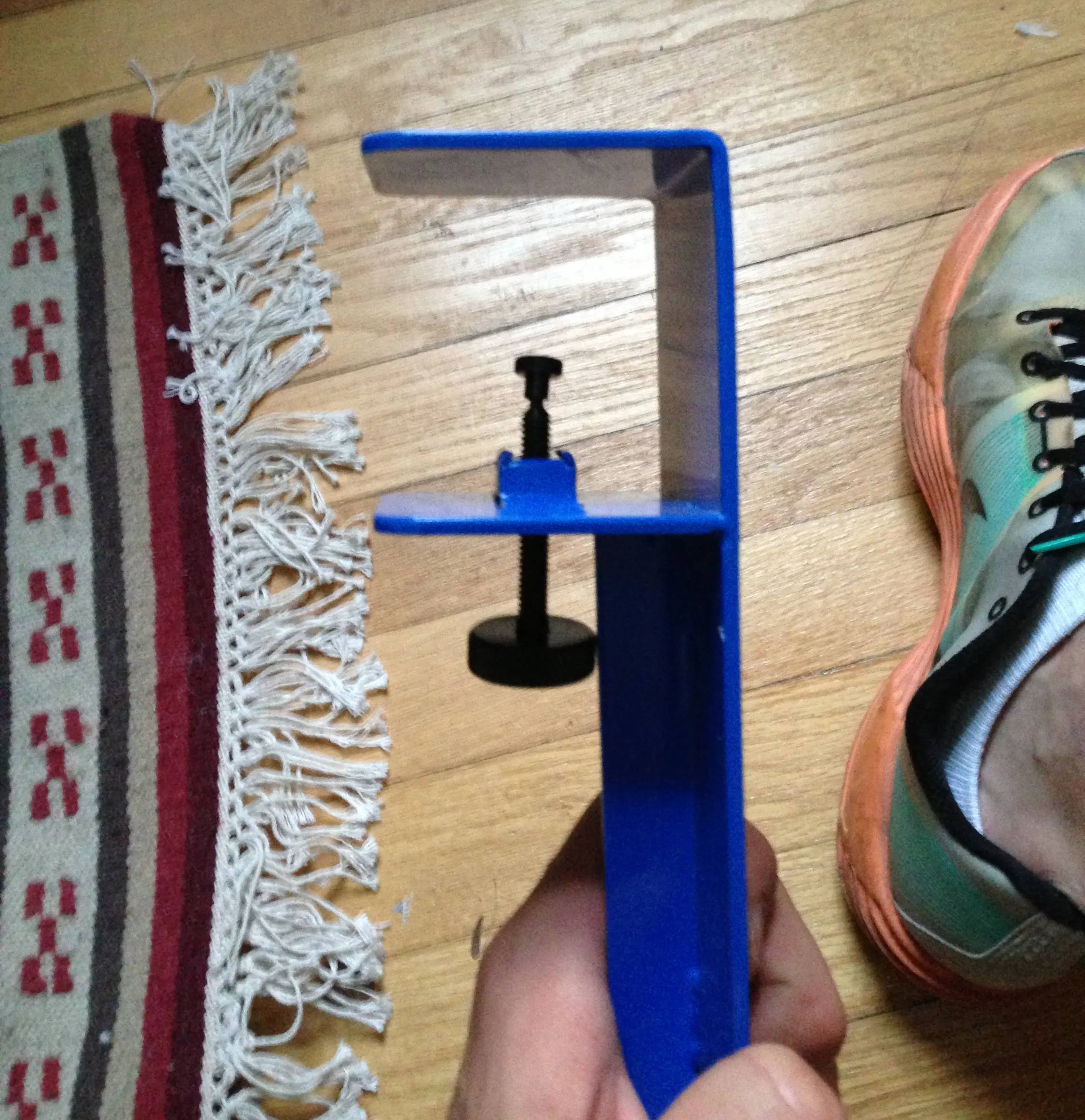 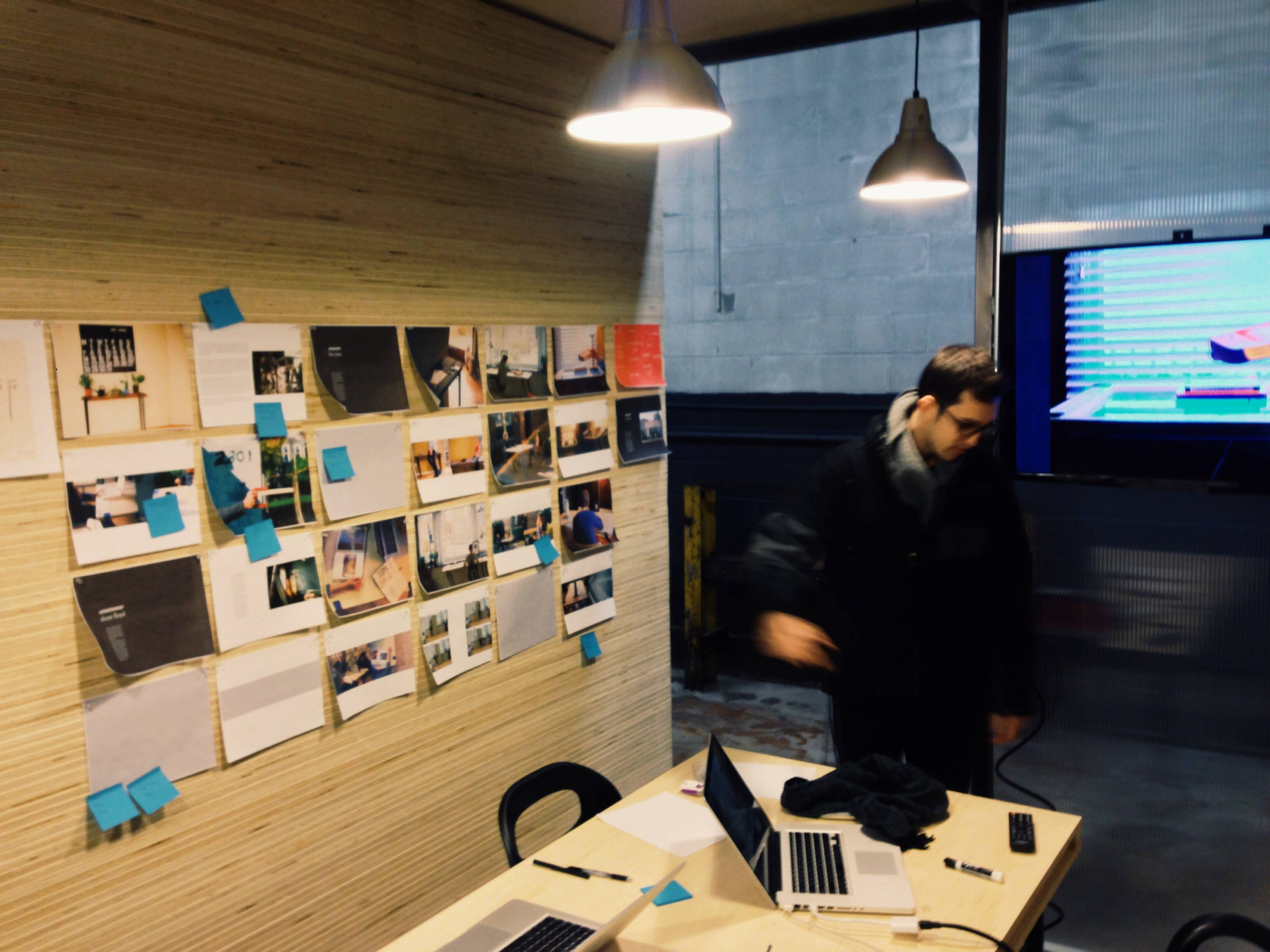 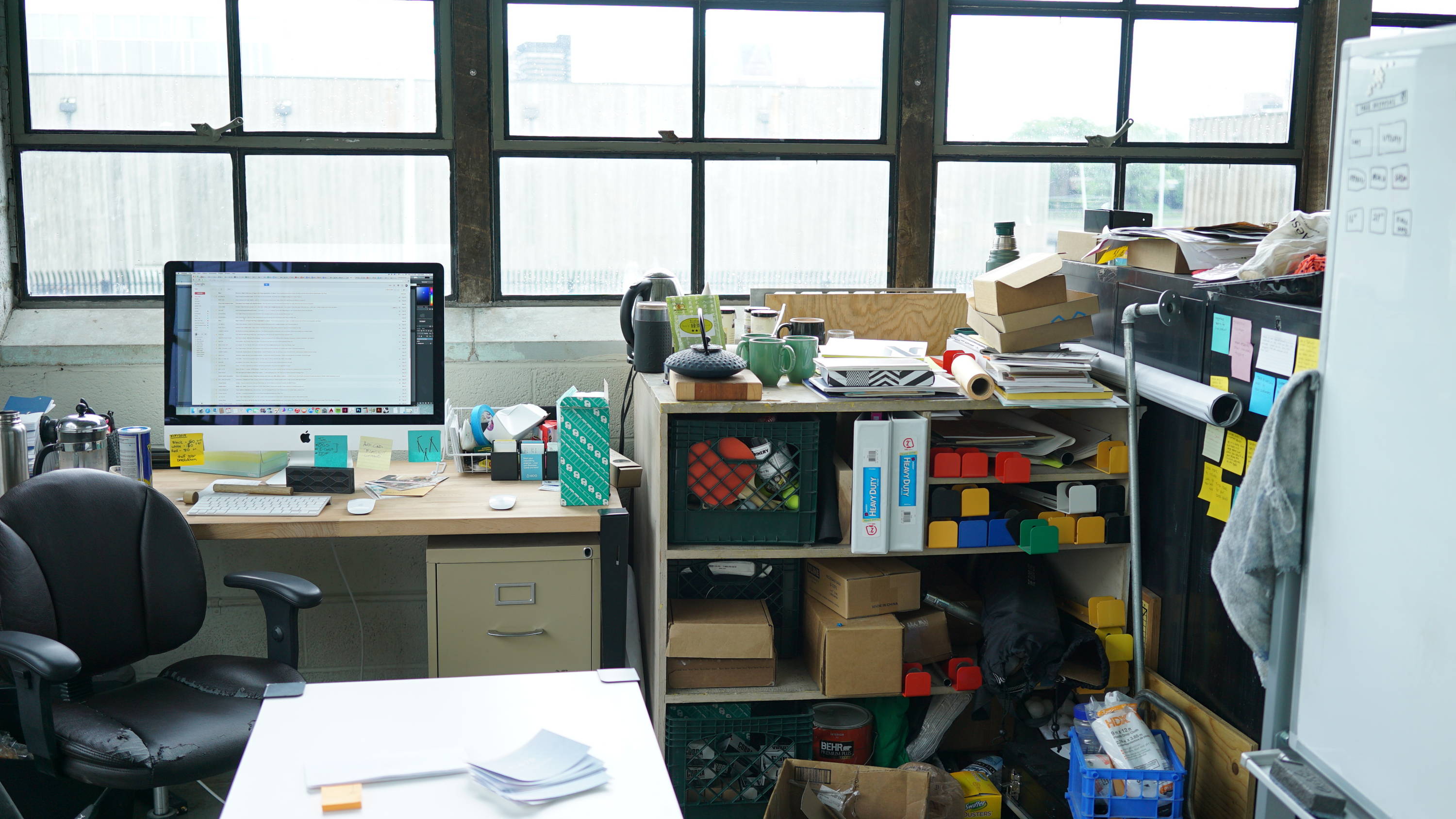 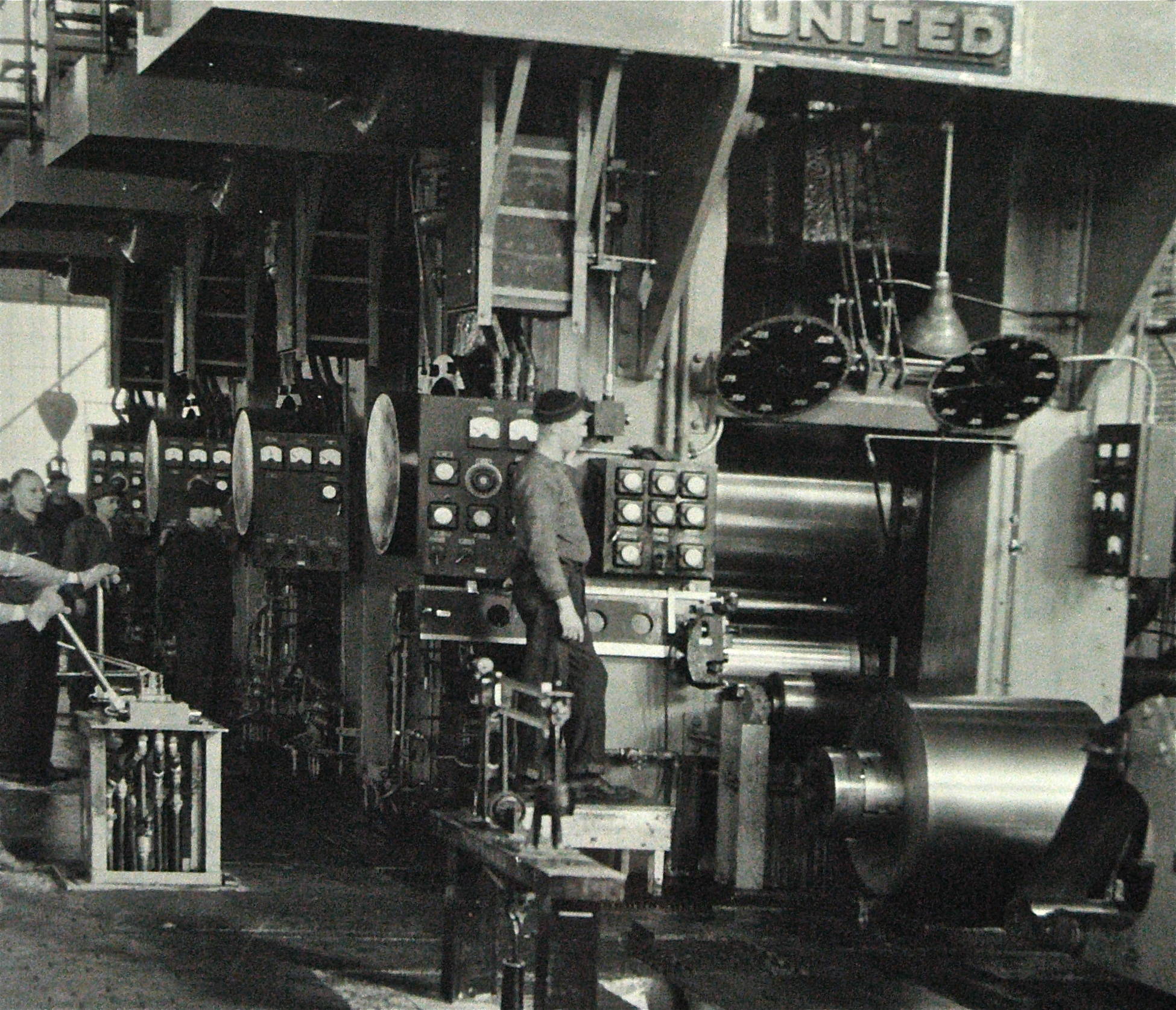 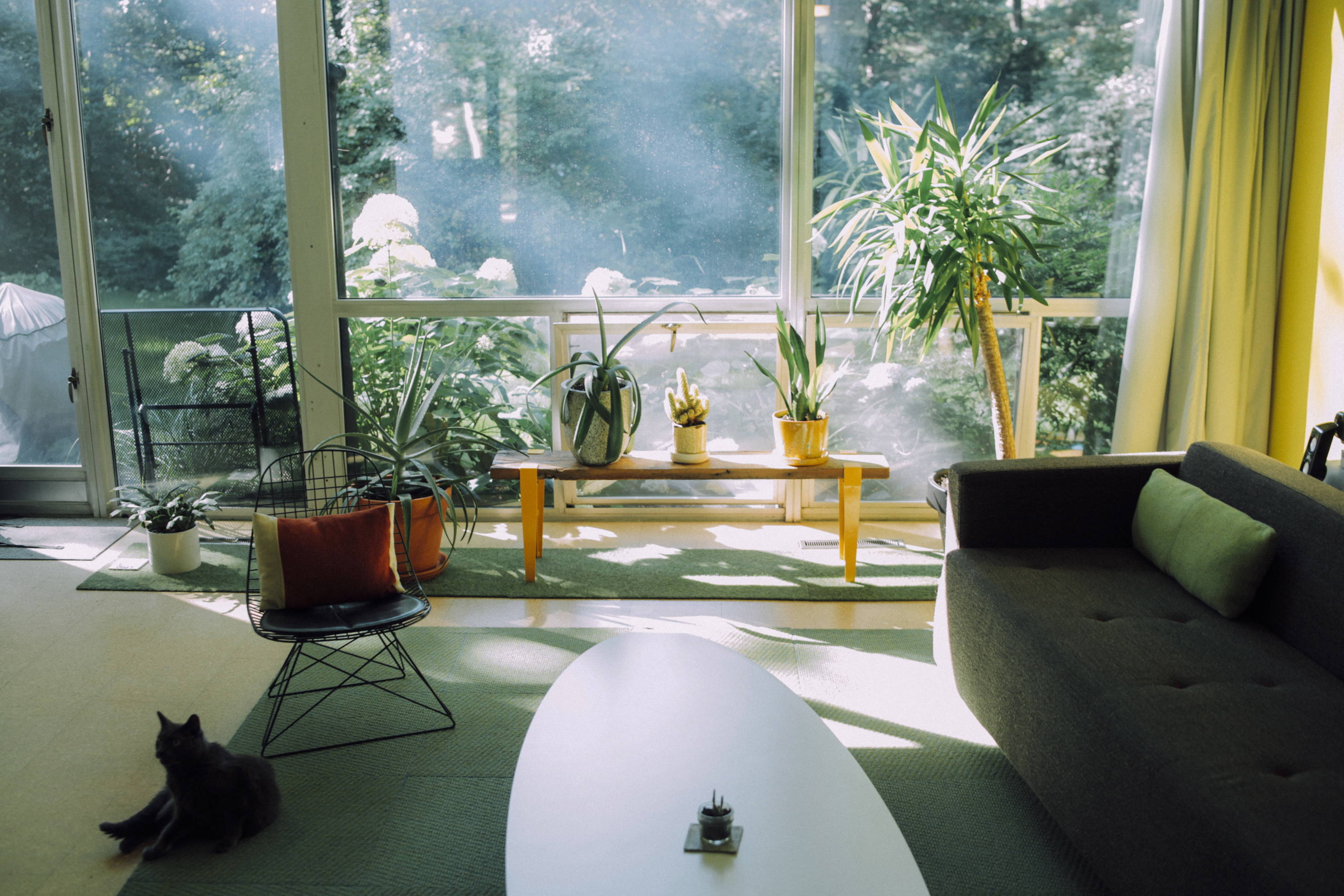 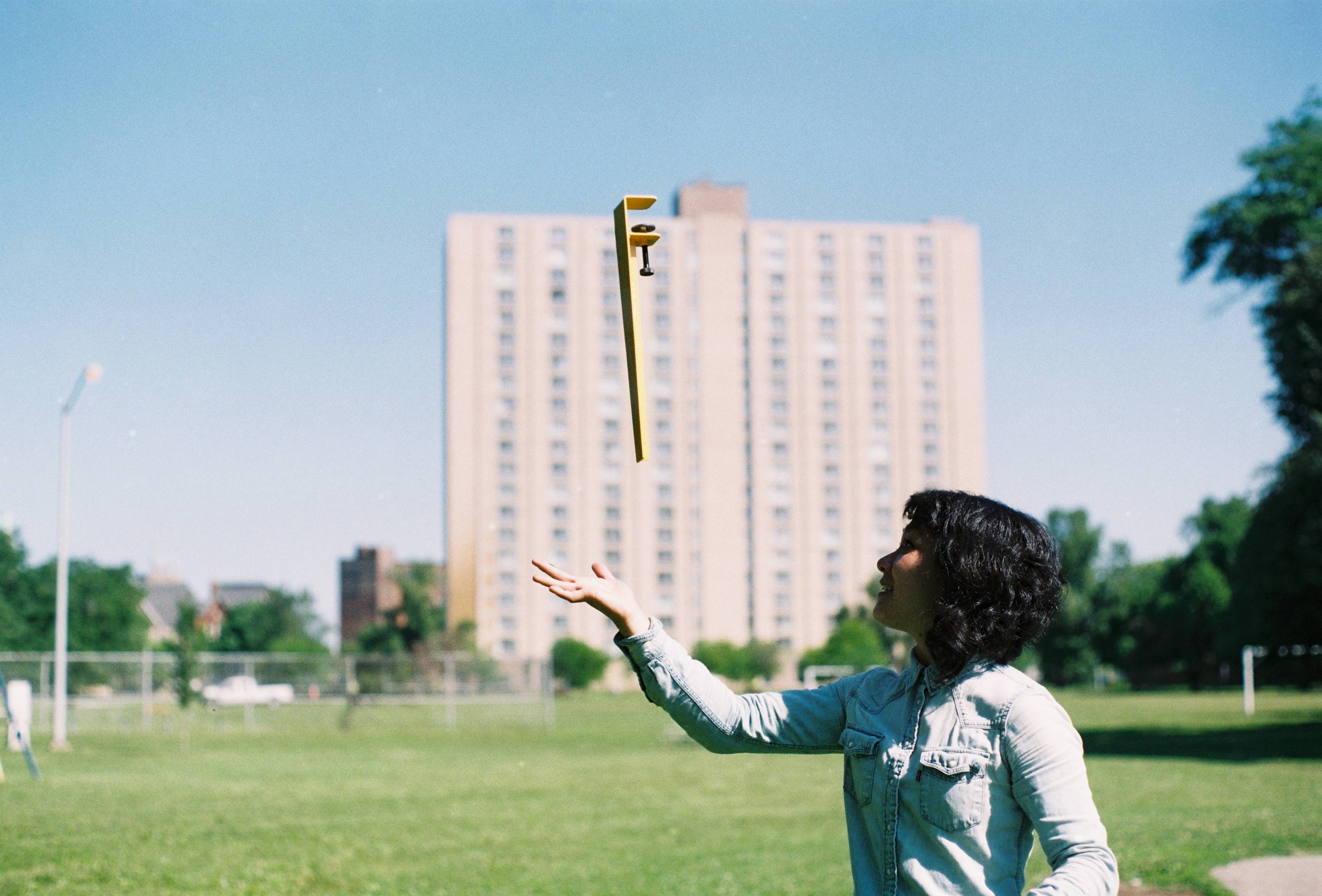 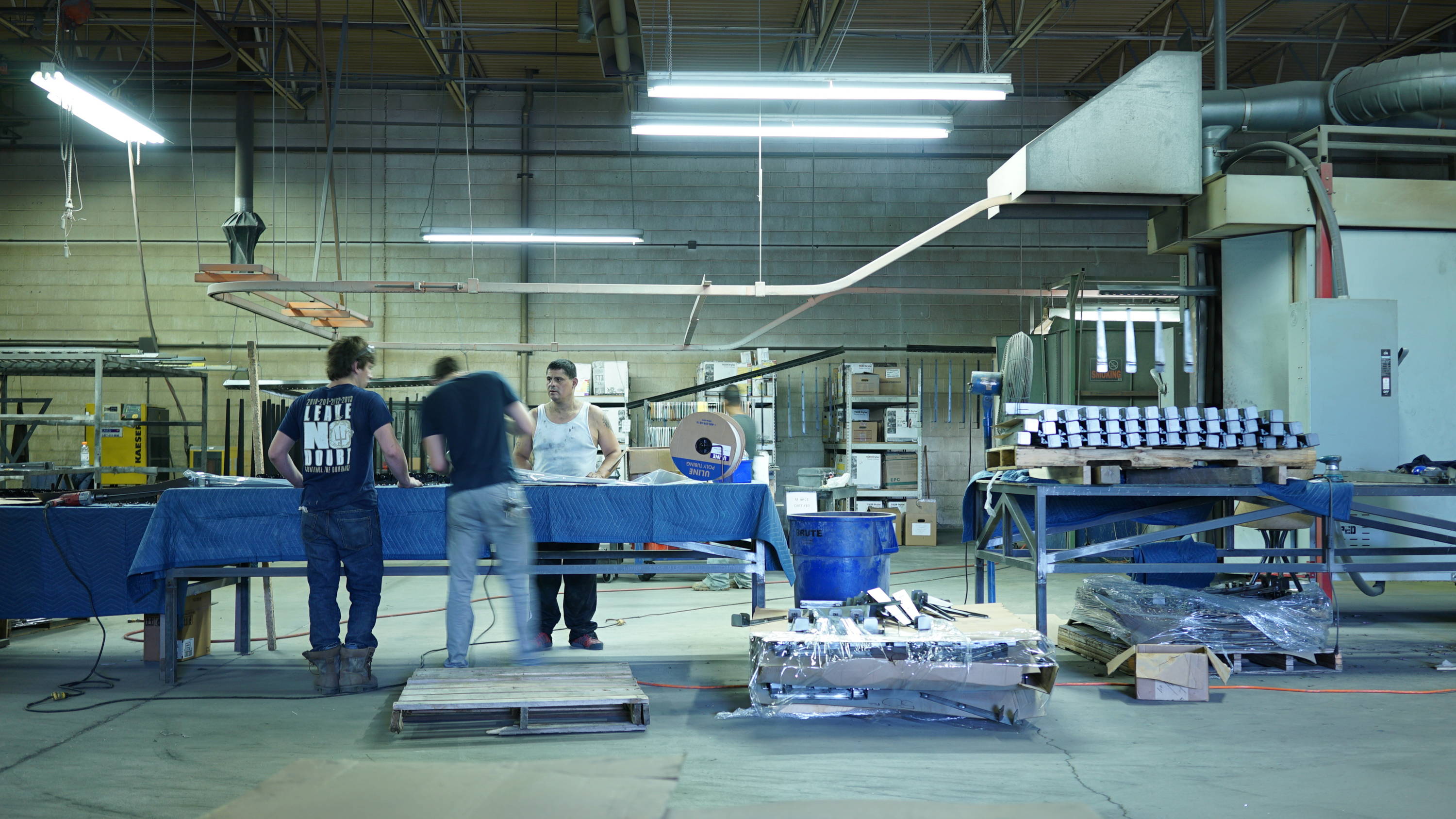 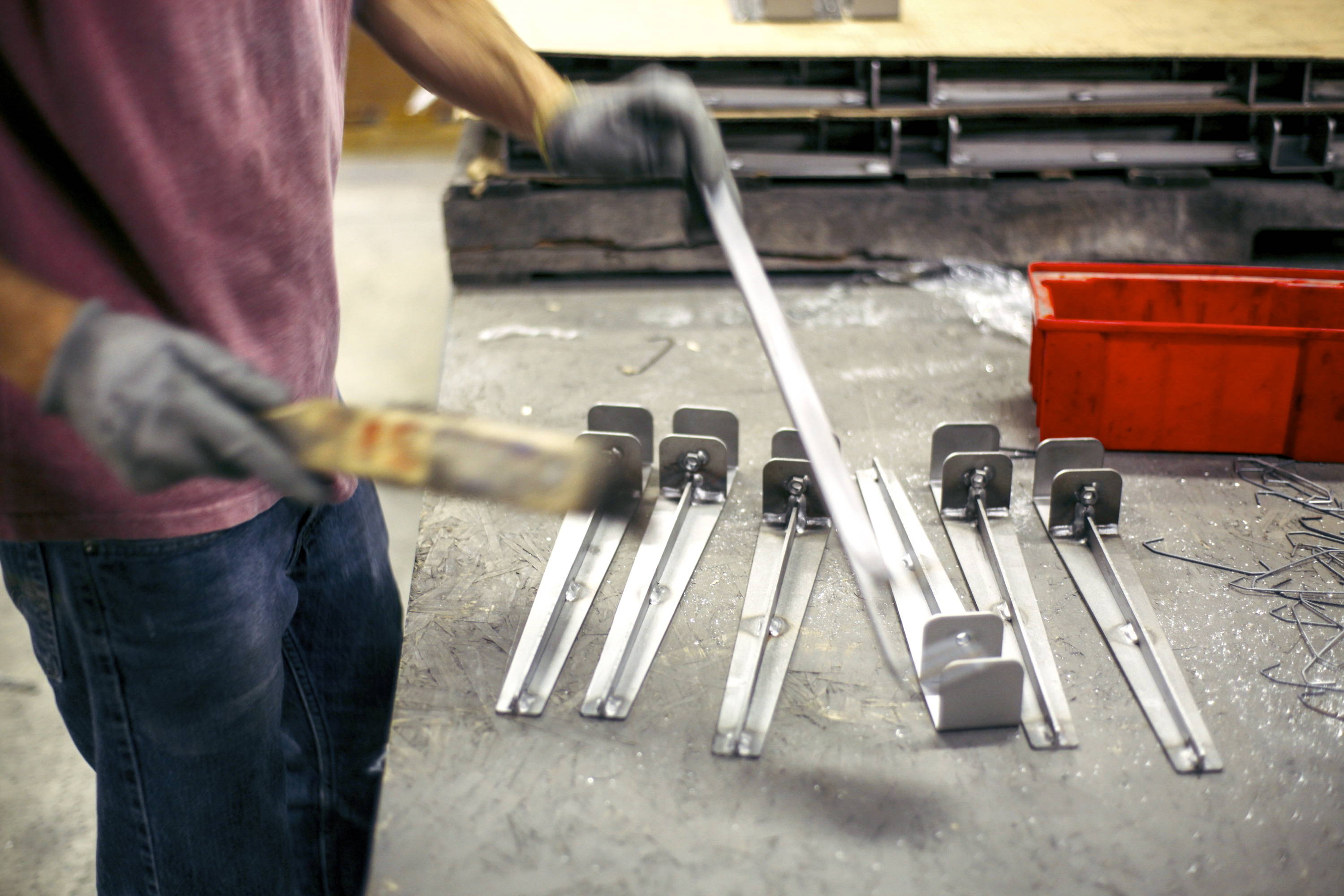 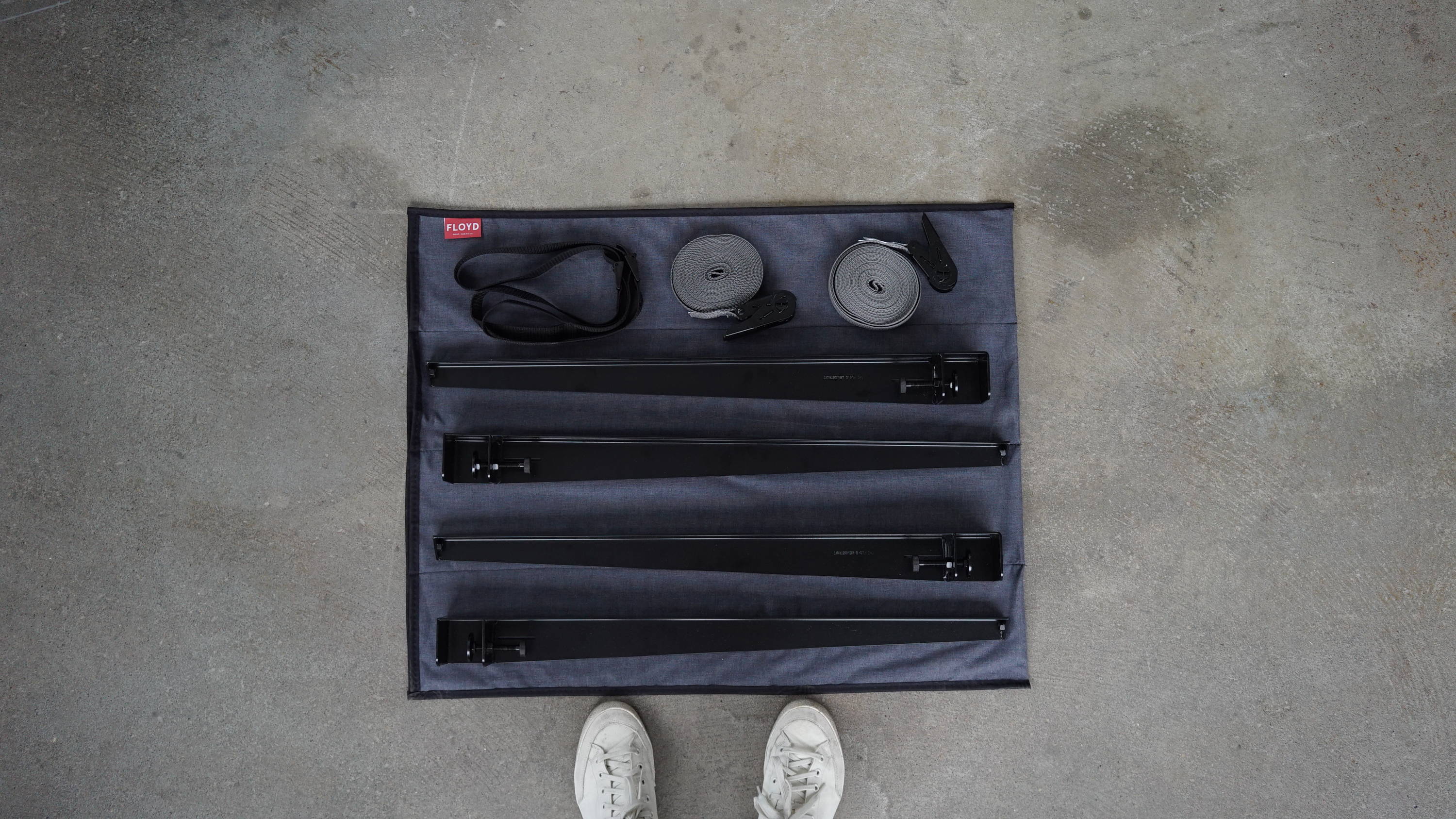 1. The very first Leg prototype, powdercoated in blue. / 2. Storyboarding in a friend's garage. / 3. Early Floyd workspace. / 4. The first Floyd worked at a steel mill in Youngstown, Ohio. / 5. Early photoshoot at the home of a friend. / 6. Photoshoots with friends in Detroit. / 7. Prepping legs for powdercoating at the facility in Detroit. / 8. Legs in production. / 9. The Legs arrived in a carrying bag, with instructions printed on the fabric.

We like to say that Floyd began with one leg. In 2014, cofounders Kyle Hoff and Alex O’Dell launched their Leg prototype on Kickstarter. Eight years later, it’s still part of the Floyd lineup.

We asked Kyle and Alex to look back to the very earliest days of Floyd — their first prototypes in a garage (yes, there’s a garage in this story), the realization that the Kickstarter campaign was going viral, and why the Leg is still representative of Floyd’s design principles.

On the First Prototype

Kyle: I was living in an apartment in Chicago with three Craigslist roommates. I had moved a number of times and — I lived in Ann Arbor for a bit, and the Bay area— and I unfortunately had thrown away a handful of Ikea products during those moves because they didn’t last, which felt so wasteful. At this point, I had most of what I needed for an apartment minus a desk , so I wanted to construct something I could keep and easily move. I started noodling on some ideas in the evenings after work. That's when I sketched out the design for the table leg. I was thinking about it from the perspective of needing something you could pack up and move.. Because I knew my Craigslist roommates weren't going to be long-term. This was around January of 2013.

I started calling a bunch of manufacturers, and I promised all of them we were going to scale up to building a zillion of these. One finally believed me, a manufacturer in Columbus, Ohio. They made one set from my drawings that cost like $500. I asked them to powdercoat it, but they said they only had one color. It was this industrial blue that they used on lockers for high schools. And so I just said. "Okay, go for it. That’ll work." And that became the very first set of legs.

Alex: Kyle moved to Detroit in 2013 and I'd moved there around the same time. We hadn’t known each other previously. Mutual friends were starting a business incubator program, and were looking for some help in launching it. Kyle signed on to work on the build-out of the space. I was working on the branding behind it. And at the end of summer, that project sort of started to wind down. We were both looking to figure out what to do next. Kyle had the Leg prototype in his apartment, and I thought it was a super interesting design. We started trying to figure out what it would mean to launch this, and landed on Kickstarter as the right path. We were storyboarding the concept in the garage.

Kyle: It was this old auto garage, which previously was being used for storage. We could go on all day probably talking about the garage. It was great in the summertime, you could roll up the doors. The garage though had no windows, no insulation and was very cold especially that winter because of the polar vortex. We lived next door as part of the incubator gig and would go over each day. It made us really dig in and kind of figure out the way forward with the project.

Alex: I was wearing a full on parka inside, the cold that winter was very brutal. On one of the walls in the garage, we had this storyboard taped up. We had photographed around Detroit and went to different places like Architectural Salvage Warehouse which was off Grand River, and we photographed different materials with the legs, like an old window, or a door, or a piece of glass. Wood floor vents also made for an interesting surface. It was going on a bit of an adventure finding materials to bring the story to life. We photographed the legs ourselves in our homes, in our friend’s places, and we started to put together a story.

Kyle: We had a lot of great support and input as well from friends on the project. We were considering doing a bunch of different colors and sizes, and someone had said, “Just keep it simple. Two colors, two sizes.” That idea of keeping things as simple as possible stuck with us.

On the Name Floyd

Alex: For a second we thought “let's call it Bracket.” I'm really glad we didn't go with that because it's just a really boring name. This is really, really embarrassing, but I remember one time I said to Kyle, “Hey, I think I have a better name, let's call it Toto.”

Kyle: Yeah. I remember that. I said “Isn't that the name of a toilet company?”

Alex: Yep. I thought the name had sounded familiar for some reason...

Kyle: We started thinking about the material, the heritage of a product made of steel and the practicality of it. The Leg is shaped like an F if you look at it sideways, and I come from three generations of ‘Floyds’. My father, grandfather, and great-grandfather all worked in steel mills in Youngstown, Ohio, and were named Floyd. Once we arrived at that name, we were pretty certain it was the way to go. The name was approachable and people enjoyed the connection to the manufacturing and heritage of the Great Lakes region as well.

Alex: When you launch something on Kickstarter, it's very noisy. What we really wanted to come through was the playfulness of the Floyd Leg. We wanted to tell the story in a fun way and, not take it too seriously. The Leg is so adaptable, and it fits a sort of nomadic kind of lifestyle. There was an element of resourcefulness and being able to use the materials around you. We shot a video ourselves over a couple weeks and launched.

Kyle: Kickstarter was the most humbling experience because you had to put yourself out there, and tell everybody you've ever met in your life via Facebook that you're starting a business selling table legs without a surface.

Alex: We were like “Are we missing something here for just launching table legs with no surface? What if this completely falls flat?”

At launch, the goal was to raise $18,000, which was a hundred sets of Legs. We knew that we’d break even if we hit the goal for the time and money spent already, and that would be awesome. Then maybe we could figure out something else beyond that.

Kyle: It was kind of exciting and then scary at the same time. All of a sudden the Kickstarter started getting momentum and then boom, boom, boom. And then the next day it was like, "Oh shit, how are we gonna do this all?"

We set out to solve a problem for ourselves and I think that sometimes that little hunch means that it might be a problem for a lot more people. I think Kickstarter was a way of validating that hunch.

Kyle: One thing we quickly noticed was that almost like 30 to 35% of our orders were international. A lot in Japan, a lot in Europe, Australia, even in Russia. So first it was “how are we going to build all of these” and then we had to quickly figure out how to ship. I had a crazy spreadsheet for trying to validate addresses.

Alex: We were also packing up all of the bags with the components and materials on Kyle’s apartment floor. We had printed the assembly instructions on a carrying bag that the legs arrived in. It was cool walking into the manufacturing facility, which was just past McNichols on I-75 in Detroit, and seeing the Legs being painted and packed.

On the Floyd Design Ethos

Alex: Almost immediately, there was a process of design iteration.

Kyle: One piece of feedback early on was that the original 29 inch Leg was wobbly. We had designed it for a lighter use as a desk, but people immediately were using it as a dining table.

Alex: That really put us onto the question of how to create a sturdy table system for a dining table or something with heavier use. We had to figure out how to create cross bracing that was adaptable and could work for different size surfaces. That’s how we arrived at the idea of ratchet straps to keep the 29” Legs braced, which we called The Utility Set.

Kyle: The first Leg is a very clear part of the discovery process and research that created the Floyd Bed — figuring out how to create tension and structure, which translated into thinking about a bed frame that could be a twin, queen, and king all at once.

Kyle: I remember right after the Kickstarter, we wrote down a mission for Floyd. At the time it was maybe a little bit simpler than it is now, but it was to change the way people consume furniture. That’s still a core part of our mission today. That way of thinking about product still holds true at Floyd. Solving a problem or pain point for yourself might resonate with a lot of people. It's been really cool to carry on that idea as we grow the team and have more and more people working to innovate and solve problems, day in and day out.

Related Posts
a-note-on-the-floyd-design-ethos
the-width-of-a-mouse-s-ear
This willl be hidden in site and replaced with the corresponding posts.