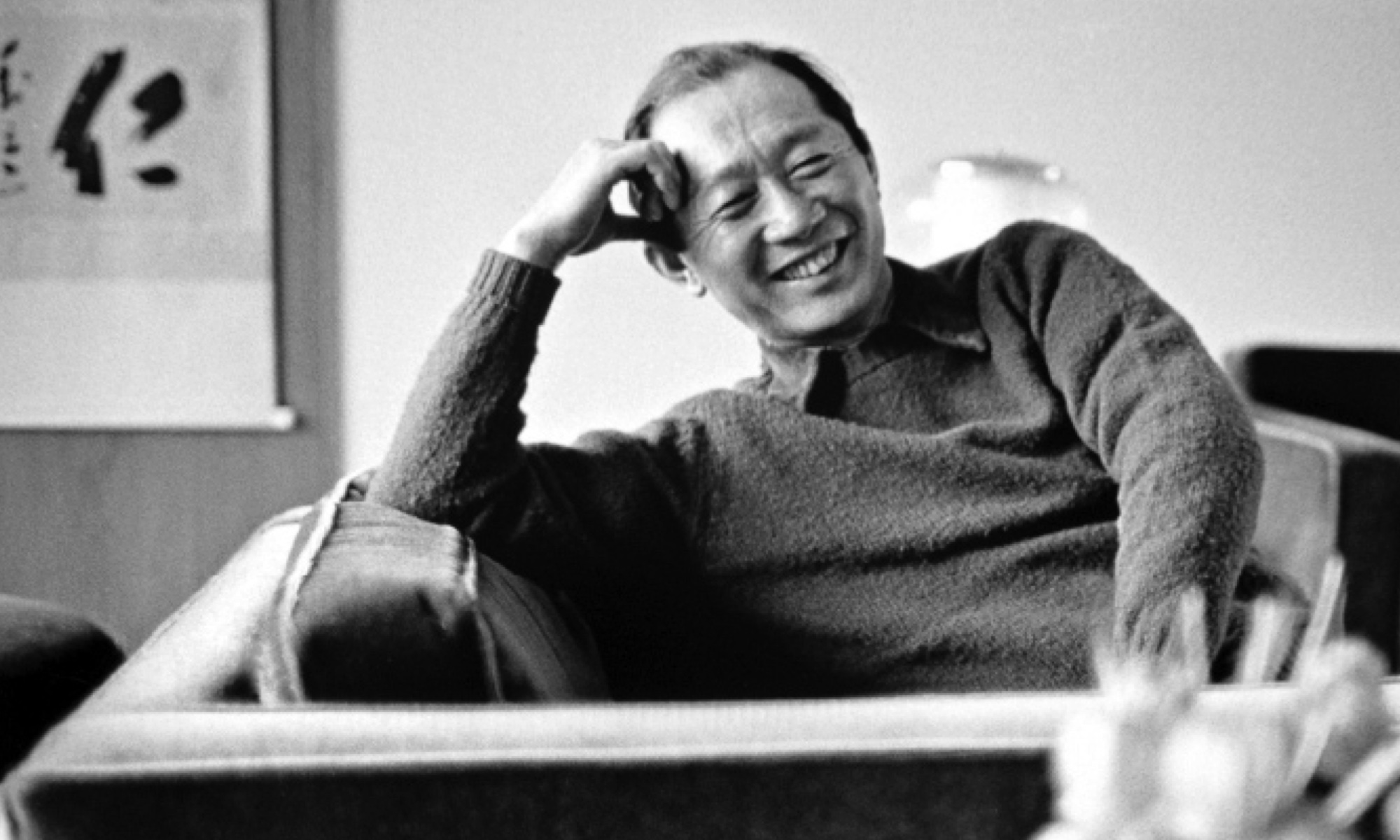 On the campus of Wayne State University, in midtown Detroit, there is a secret garden. Rather than lush plants, this garden is home to sleek sculptures and a still reflecting pool. It is surrounded by buildings that are elegant in their simplicity. It isn’t secret, either, really, except in the sense that it’s an unexpectedly peaceful setting in the heart of the motor city. The garden, and the buildings that form its boundaries are the work of a single iconoclastic architect. Here, in the courtyard at Wayne State University, is some of the finest work of Minoru Yamasaki.

Yamasaki, or “Yama”, as he was called by many of his friends, grew up in Seattle. He didn’t move to the midwest until securing a position at Smith, Hinchman, & Grylls in 1945. During the war, the firm was able to help Yamasaki avoid Japanese internment camps, allowing the architect to embark on his remarkable career. On the extensive list of Yamasaki’s projects, his design for the World Trade Center is certainly the most iconic. But, in his hometown of Detroit, Yamasaki brought to life his desire for “serenity and delight” in architecture — this interpretation of New Formalism would differentiate his work from the staid modernists who eschewed ornamentation of any kind. Read on for a virtual tour of our very favorite Yamasaki buildings in our home city. 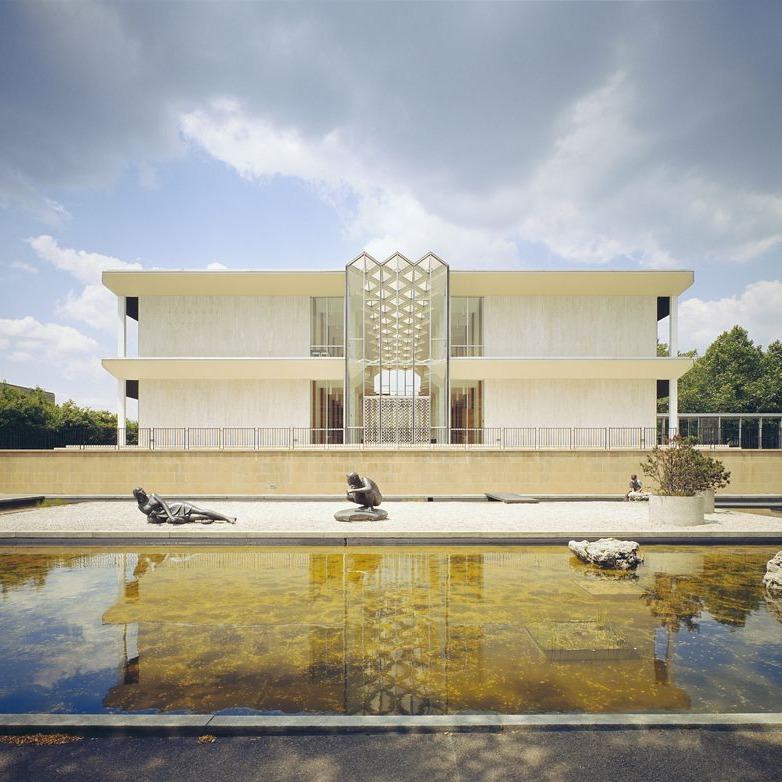 The exterior of the building, with the statue garden & reflecting pool in the foreground. Image via the Library of Congress. 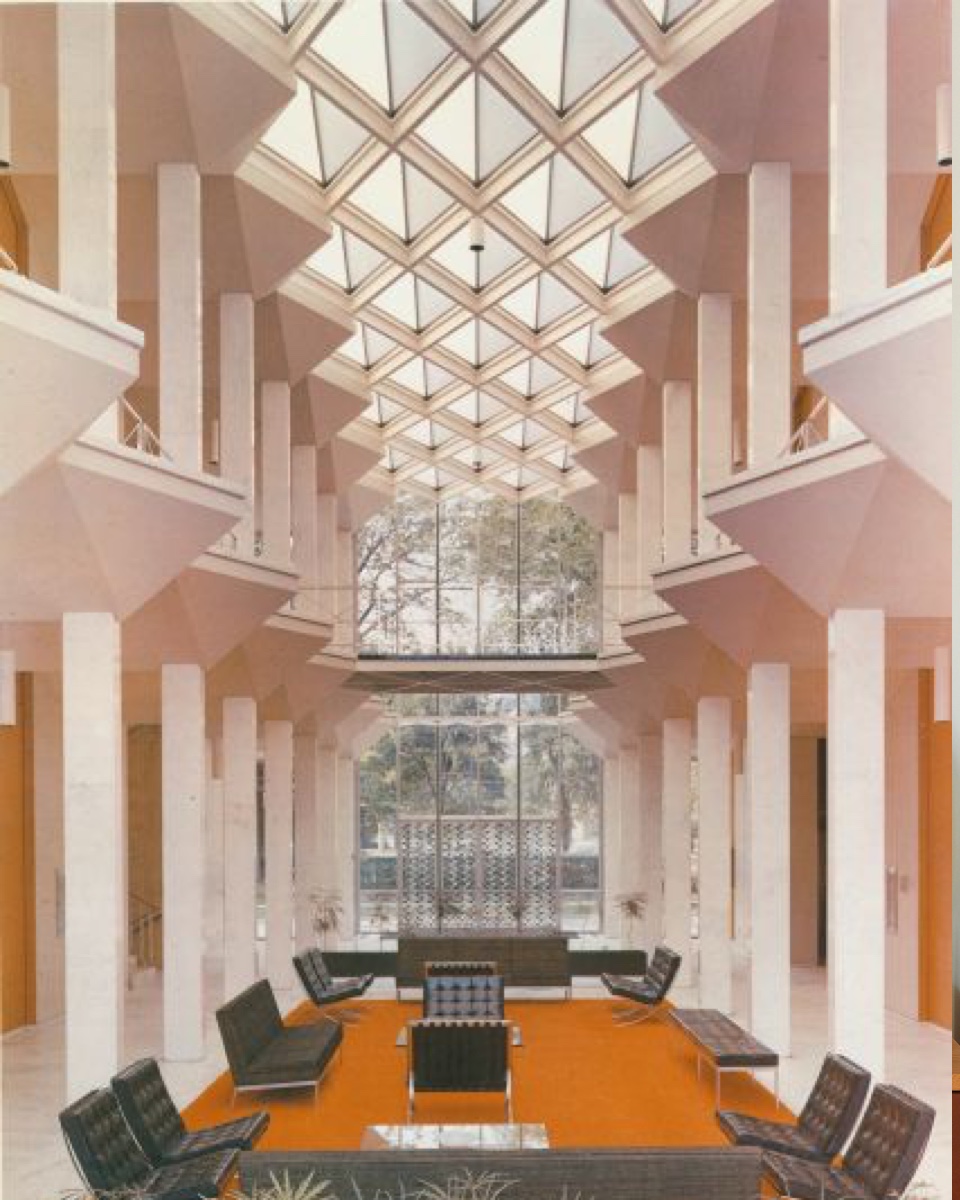 The interior of the conference center. Image via the Wayne State University Yamasaki Legacy.

After a visit to the Taj Mahal, Yamasaki became fascinated with the creation of modern monuments, and with the sense of peace that symmetrical construction provides. His design for the Mcgregor Memorial Conference Center at Wayne State University seeks to evoke that feeling. Set on a slab, with simple lines and soaring windows, the building was Yamasaki’s first for the university and was completed in 1958. It anchors the campus’ central courtyard, and was designed to fit a human scale, despite its grand proportions. 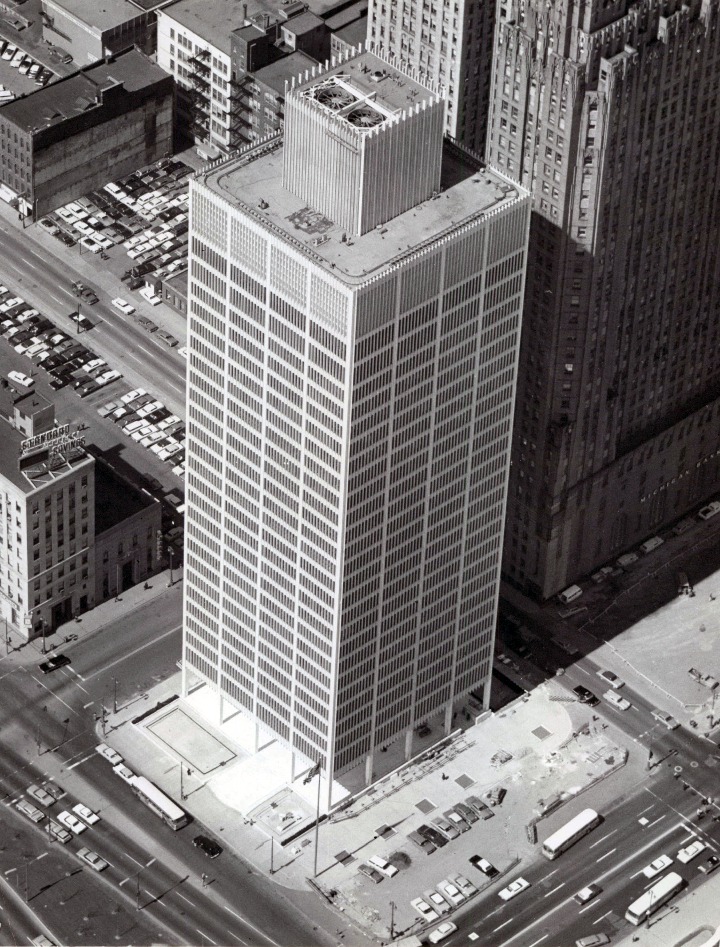 One Woodward in 1966. Image via the Wayne State University Yamasaki Legacy.

Across from the Noguchi-designed Hart Plaza, this soaring high-rise was Yamasaki’s first skyscaper. It served as a laboratory for many of the techniques he would go on to use at the World Trade Center. Set on a pedestal, with an open colonnade on the first floor, the building invited the spectator inside. Yamasaki used narrow glass windows because of his own agoraphobia, and invented a modern cooling scheme that would allow for an underground parking garage. Constructed from rich materials like marble, the building was the first high-rise built in Detroit in over 30 years when it was completed in 1963. 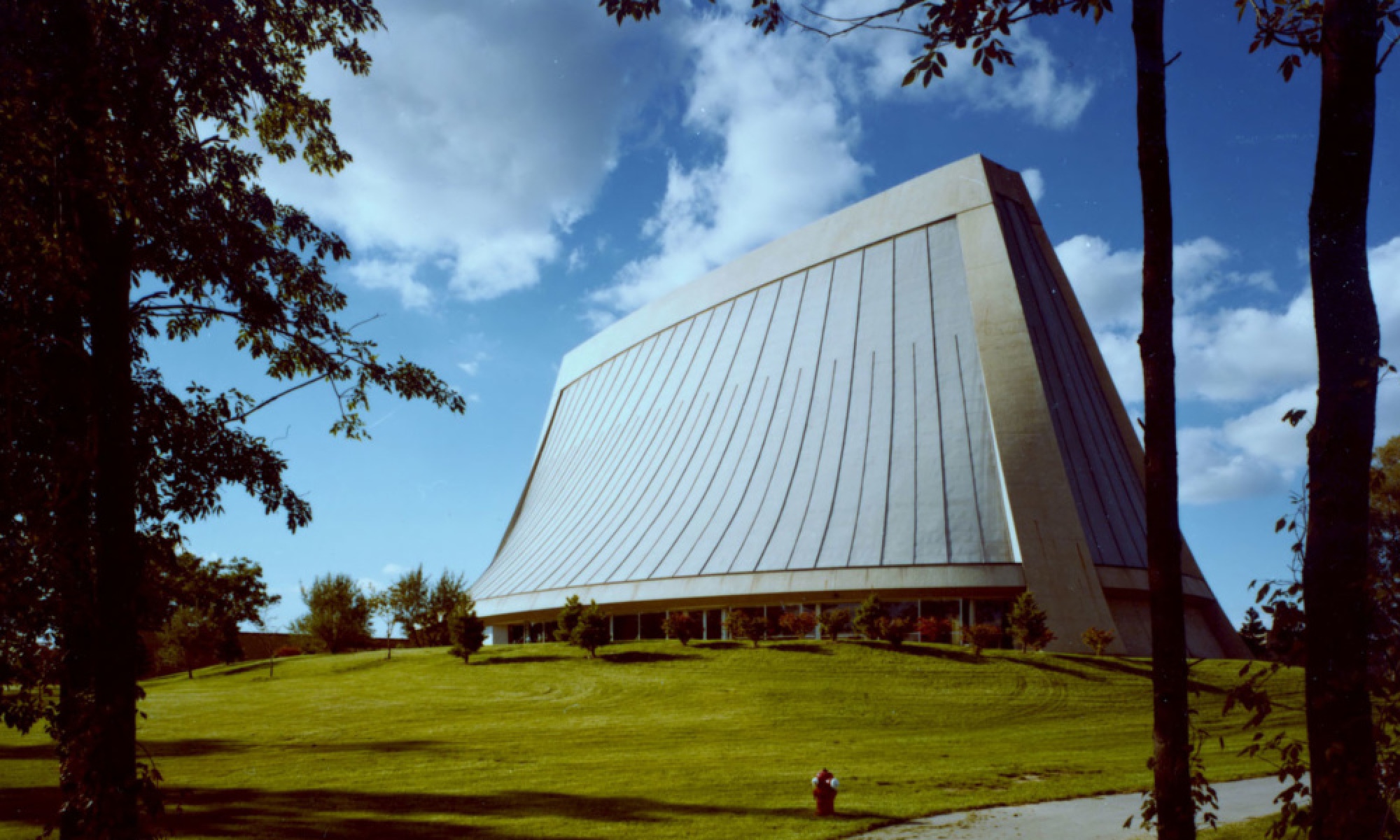 Temple Beth El in Troy, Michigan. The shape of the building was meant to evoke the tents of the biblical Israelites. Image via the Wayne State University Yamasaki Legacy. 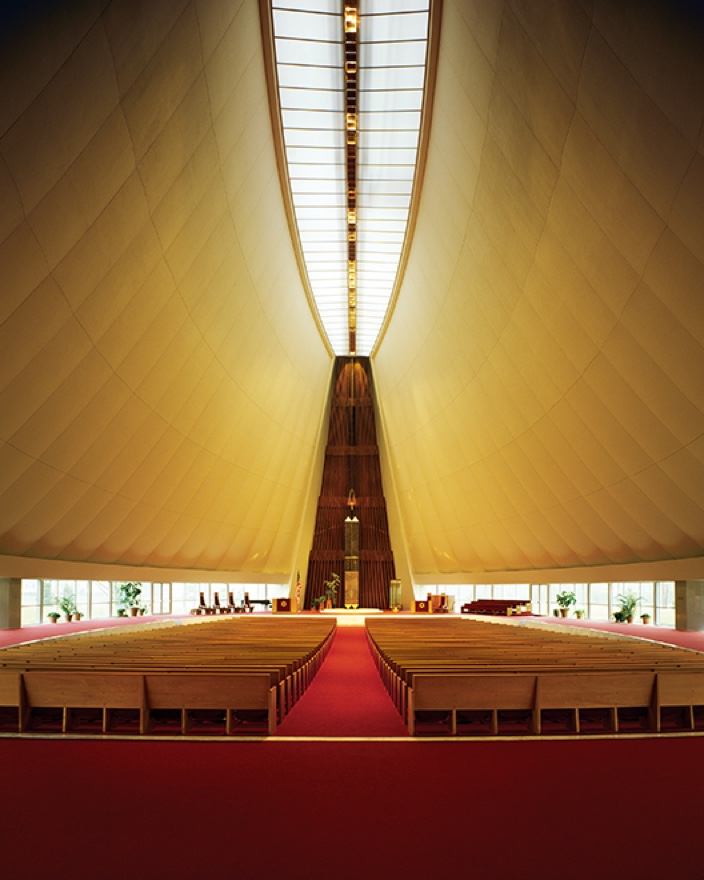 The interior of the Temple Beth El. Image via the Library of Congress.

Built in 1973, Temple Beth El is one of two synagogues built by Yamasaki in Troy, Michigan. The temple’s soaring silhouette makes it immediately recognizable. But the unique shape is more than an eye-catching choice. The sanctuary is designed to reference the gathering tents of the biblical Israelites. From the interior, a low ring of glass windows creates the illusion of the soaring tent opening up to the outdoors, while the dramatic roofline draws the eye to the sky. 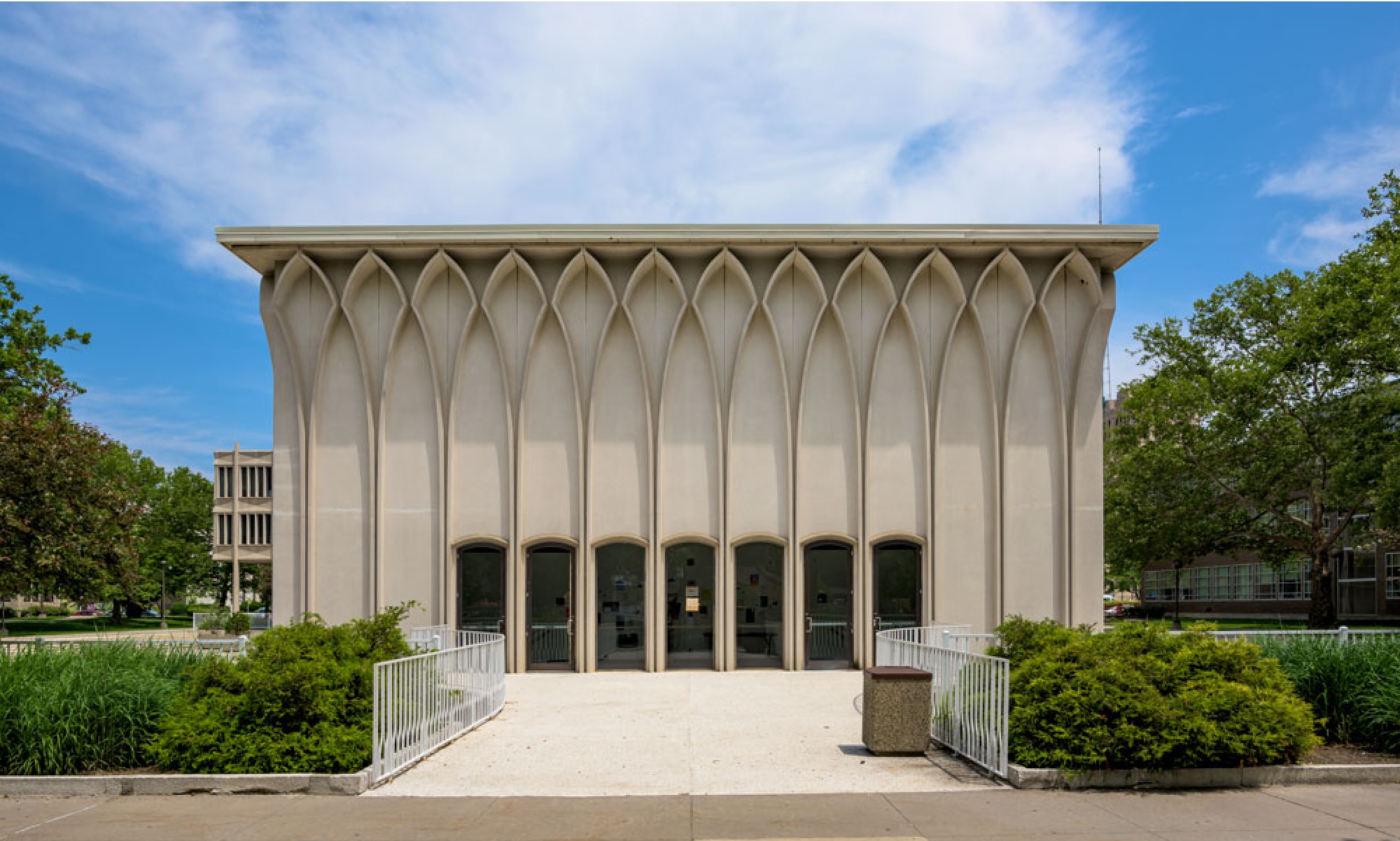 Another building on the Wayne State campus, the Helen L. Deroy auditorium is visually striking. Slender arches meet at a flared roofline, almost like a bed of elegant flowers. Yamasaki specifically built a small moat around the building, creating a serene island separate from the bustle of the campus. Grouped around the same courtyard as the Macgregor Conference Center, the building has the effect of a jewel box amidst the grandeur of Yamasaki’s plan.

Learn more about Yamasaki in Detroit, and around the world.