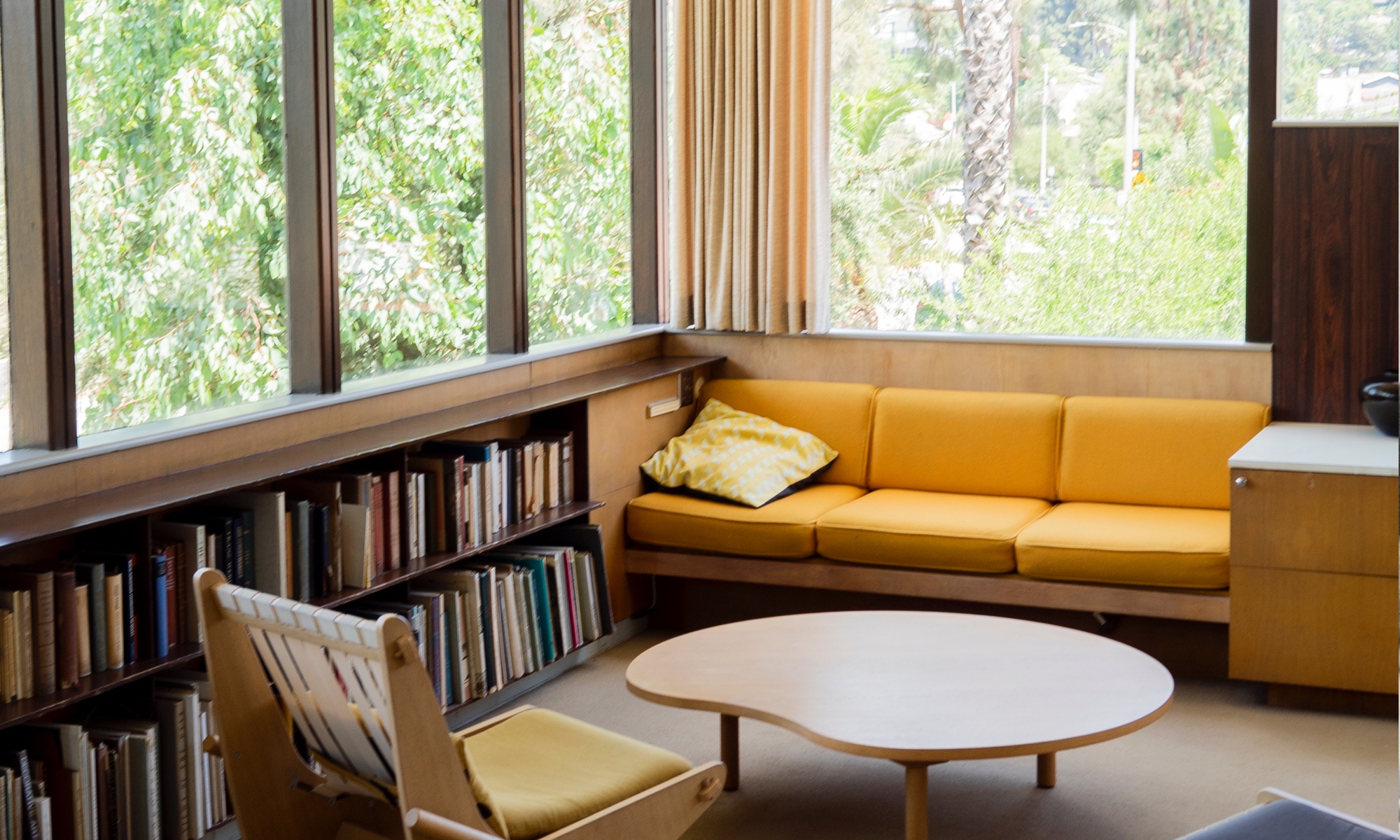 Ten thousand dollars doesn’t go very far in Los Angeles these days. But in 1932, it was a $10,000 loan from Dutch industrialist Cees H. Van der Leeuw that allowed the renowned architect Richard Neutra to build a home that would become a jewel of California Modernism. 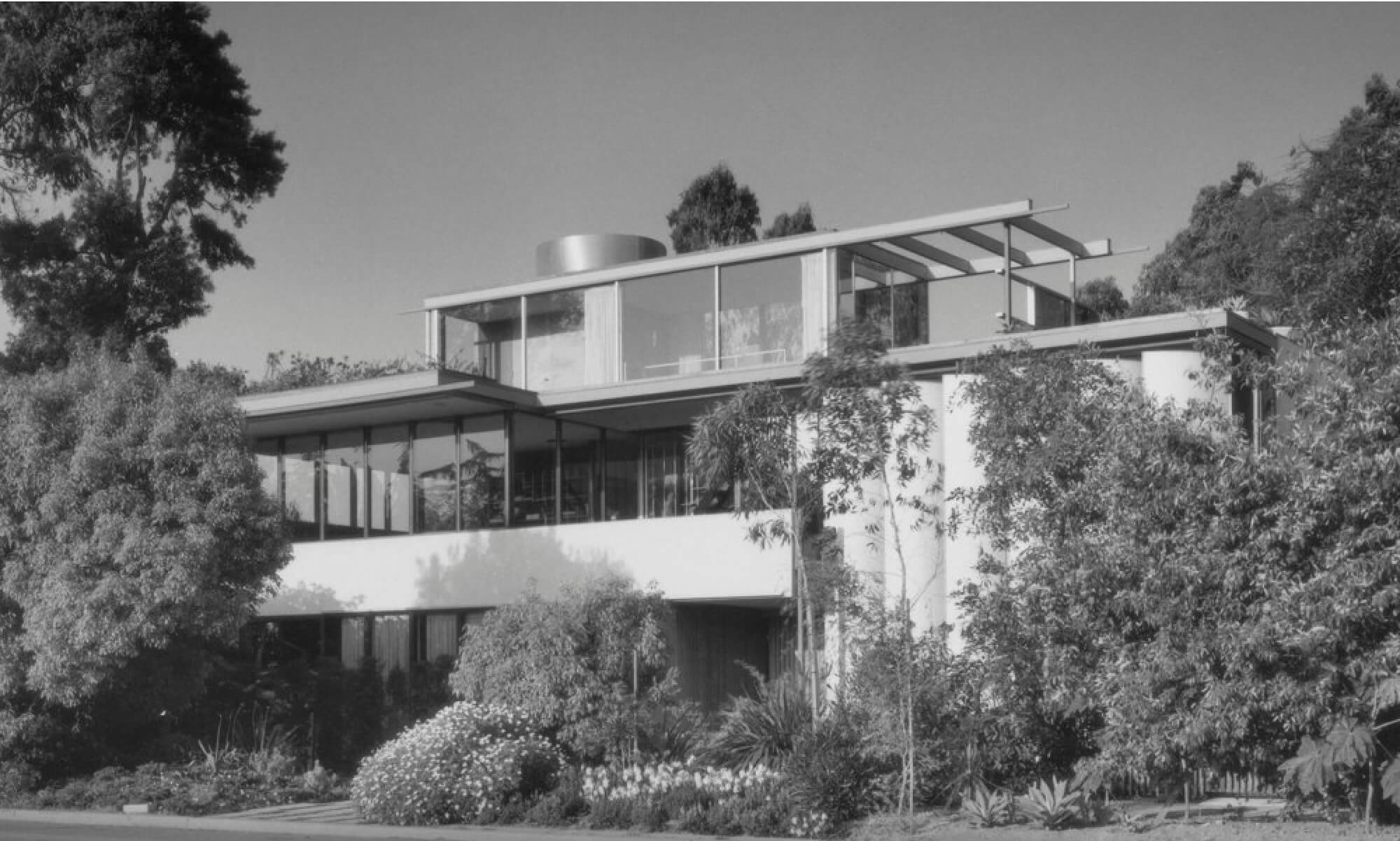 The home is perched just above the Silver Lake Reservoir. Image via the Richard and Dion Neutra Institute for Survival Through Design.

Neutra was already a successful architect when he began constructing the Van der Leeuw (VDL) Research House on a 60-by-70 foot lot overlooking the Silver Lake Reservoir. The compound would be home to two families and a workshop, and play host to the design luminaries of the day, including Neutra’s contemporaries Frank Lloyd Wright and Charles and Ray Eames. The home’s angular glass and metal facade repeated many of the innovations Neutra pioneered in the Lovell House, the first steel-framed home built in the United States. The difference, though, was a mandate to create a beautiful, functional living space on an attainable budget. The Silver Lake house was no monument to rarified, expensive beauty. Here, in the home he would live in for the rest of his life, Neutra constructed an environment that would become a model for high-density urban housing the world over. It was a case study in modernism for the middle class. 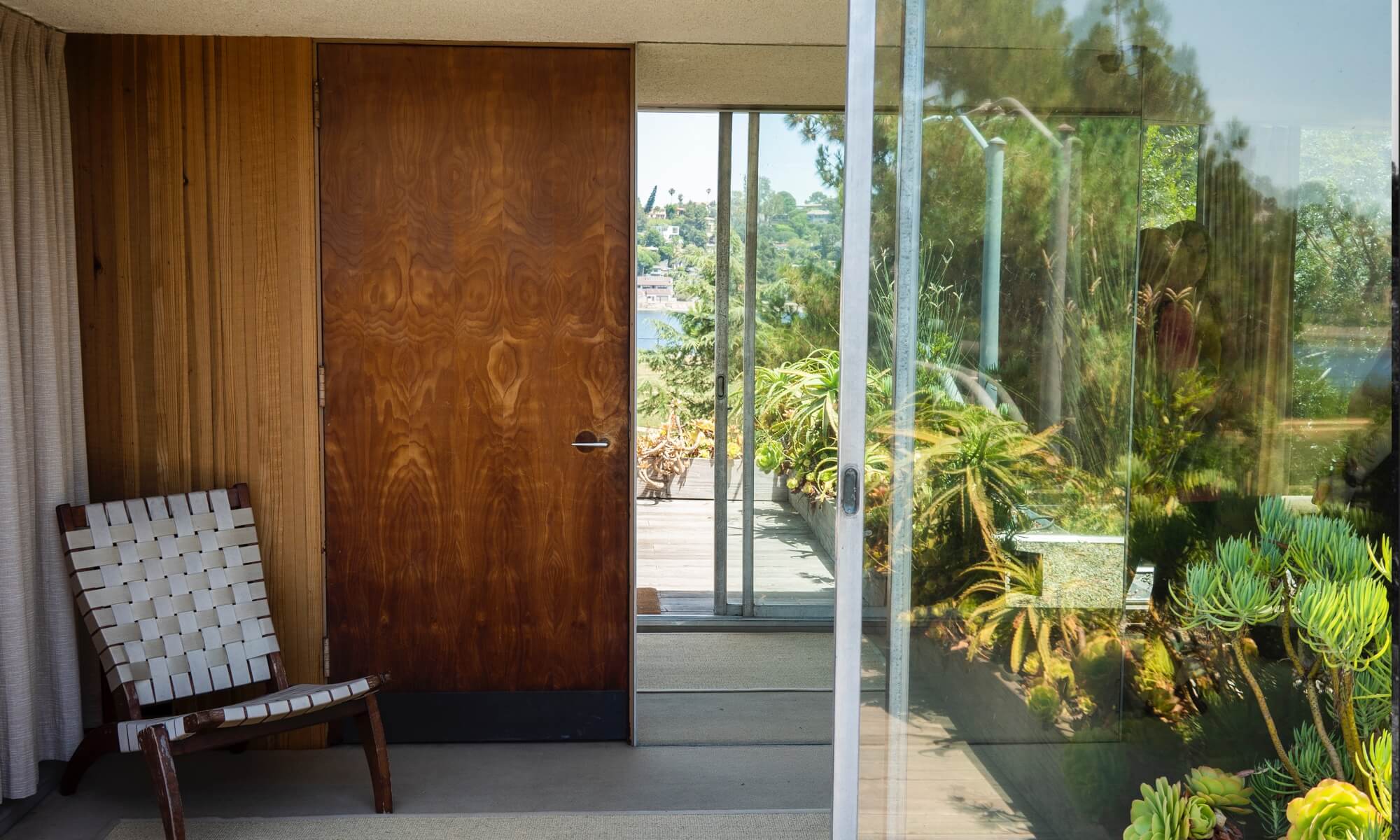 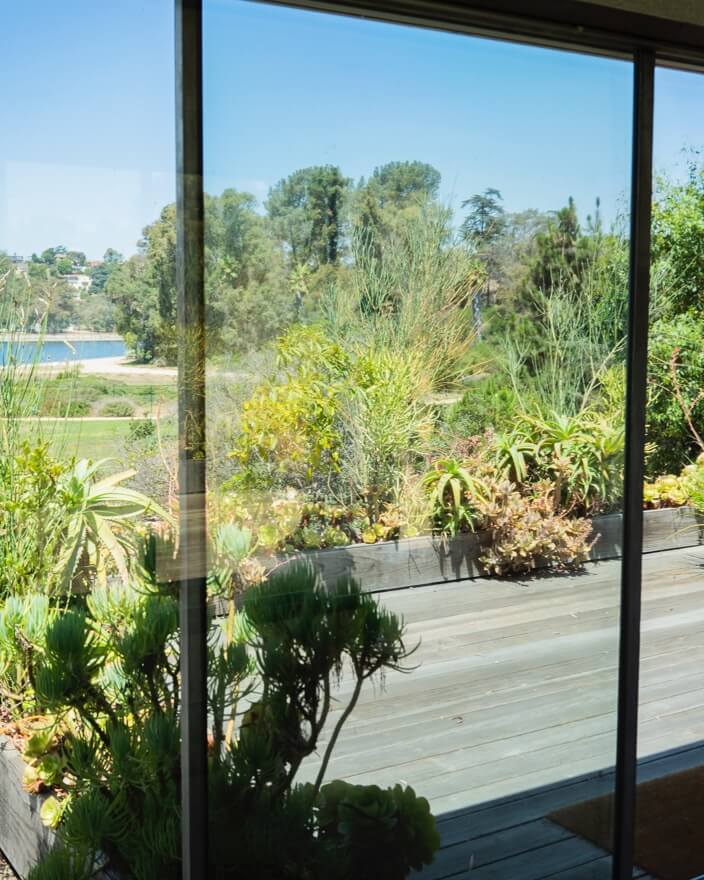 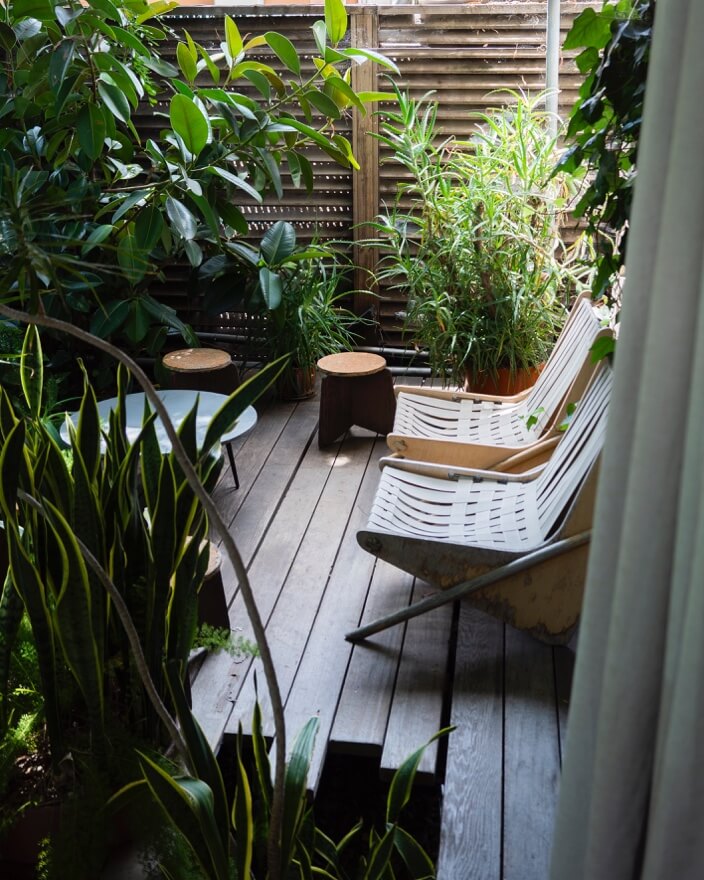 Although the original home burned to the ground in 1963, leaving only the workshop and basement intact, Neutra and his son Dion rebuilt and used the tragedy as an opportunity to incorporate new technology into the structure. They added a penthouse solarium and reflecting pool, and experimented with bio-responsive, sustainable features, like automatic louvered blinds that adjusted to the day’s changing sunlight. The result is a home that moves beyond a singular architectural vision, instead embodying a progression of technique and style that spans decades and generations.

Inside the home, the notoriously detail-oriented Neutra paid equal attention to the minutiae of furnishing. He used low-cost and durable materials, including plywood and formica to fit built-ins designed for functional daily use. Other furniture was chosen (or made) by the architect for durability in high-traffic settings or efficient use of space. Glass walls, reflective surfaces, and an open floorplan make the home feel more spacious than its 2000 square feet. Even so, the space fosters a sense of privacy despite its airy feel. Neutra wrote, "I was convinced that high-density design could succeed in a fully human way, and I saw my new house as a concrete pilot project. I wanted to demonstrate that human beings, brought together in close proximity, can be accommodated in very satisfying circumstances, taking in that precious amenity called privacy.” 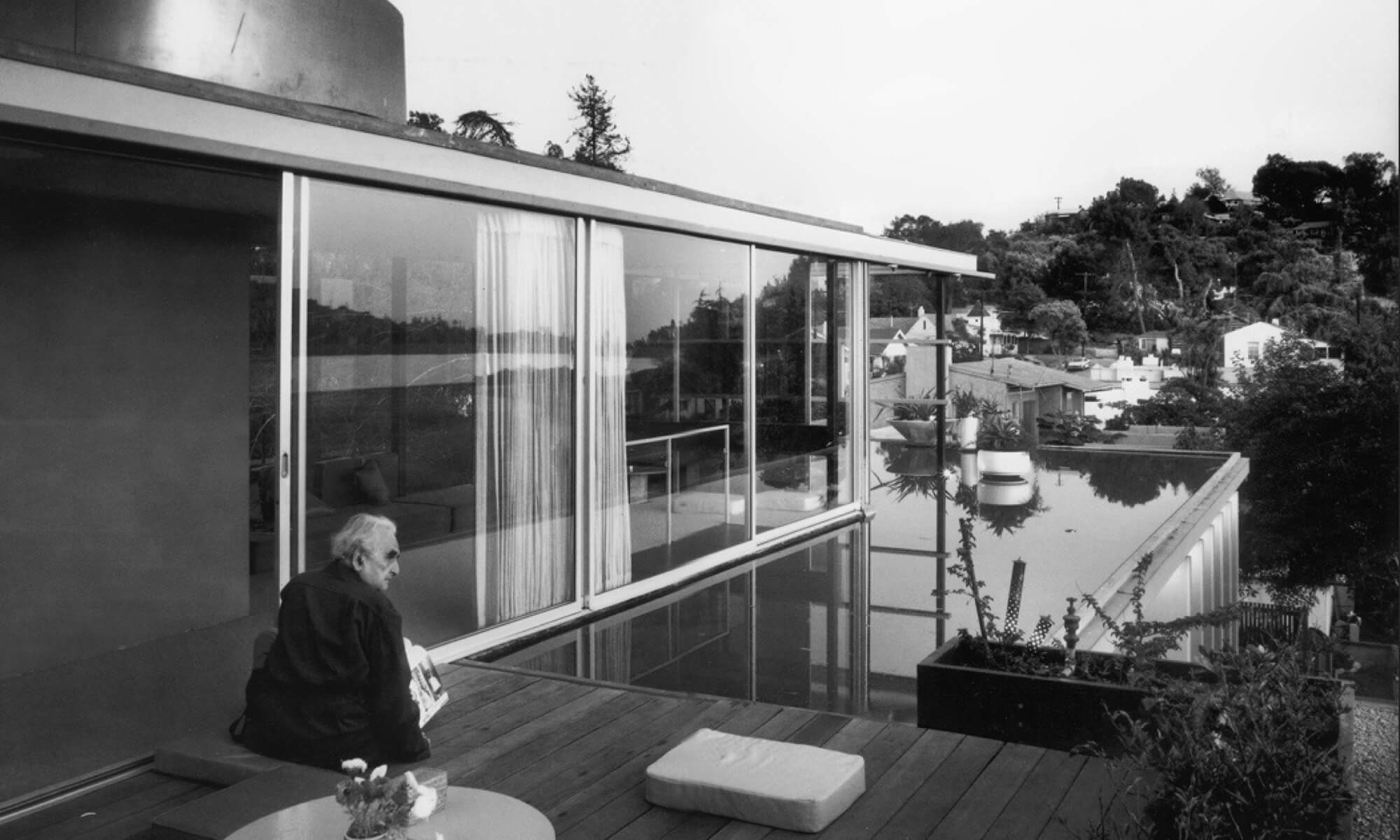 Neutra on his rooftop, overlooking one of three reflecting pools on the property. Image via the Richard and Dion Neutra Institute for Survival Through Design.

Today, the VDL Research House is owned by Cal Poly Pomona, and is once again home to architects and students, who now study Neutra’s masterpiece and use the space as inspiration for their own work. Nearly ninety years after its construction, and almost sixty after its rebirth, the home still shines in the California sun. It’s easy to imagine Neutra, whose ashes were scattered on the property after his death in 1970, feeling satisfied that his architectural experiment inspired as he intended. On a plaque in the courtyard, Neutra’s words set out his intention for each visitor: “...man’s survival depends on his design.”

Learn more about the VDL Research House and plan a visit.