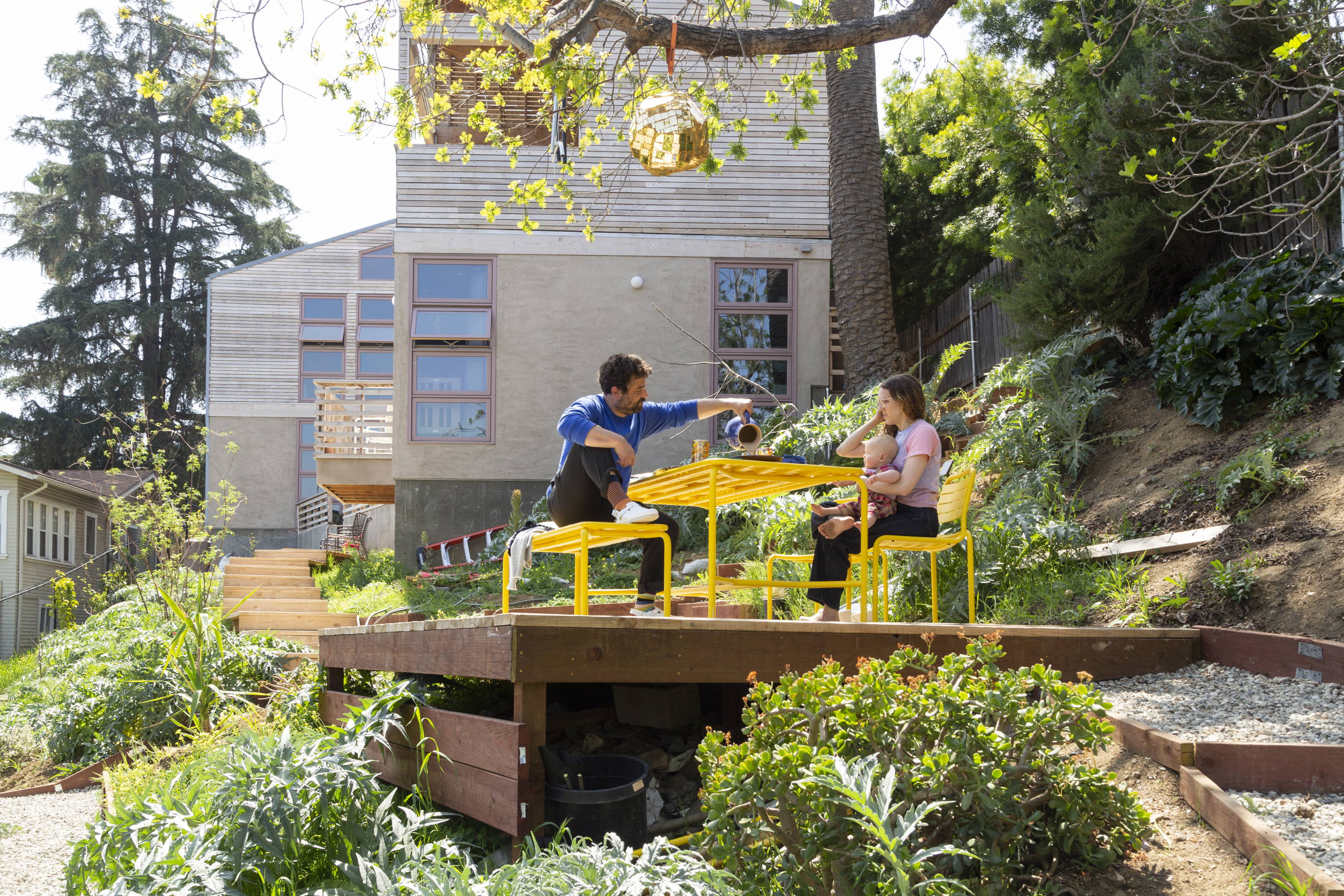 When I enter Lizz Wasserman and Isaac Resnikopf’s net-zero home perched on a hilltop in the Highland Park neighborhood of Los Angeles, Isaac is cradling their 8 month old baby, Esphyr, in one hand, and washing rainbow chard from their garden with the other. In actuality, he is using his feet as well, since their water-conscious sink is controlled by a foot pedal so it only flows as absolutely needed. This is just one of the many thoughtful details that Lizz, creative director of Fred Segal, and Isaac, designer/artist and the Founder of collaborative design studio Project Room, have baked into the home that took them 9 years to build from the ground up. Collaborating with Lizz’s father, an architect, and her mother, a landscape architect, they achieved the impossible: four family members with fiercely strong perspectives built a home that expresses their respective aesthetics while also proposing a model for what the eco-friendly family home of the future might look like. And, they lived to tell the tale.

The Net Zero house is an ambitious and admirable thing. Can you explain what that means?

We worked to “balance” the house energy consumption with our solar energy production. Since there’s only a certain amount of solar our roof can capture, we had to work to decrease the energy consumption of our house. So, we tried to view the whole thing holistically: we heavily insulated the house, there are a lot of passive cooling elements, and we didn’t install a gas line: so the balance of the house is more energy in, less energy out, even though we charge our car off the solar! 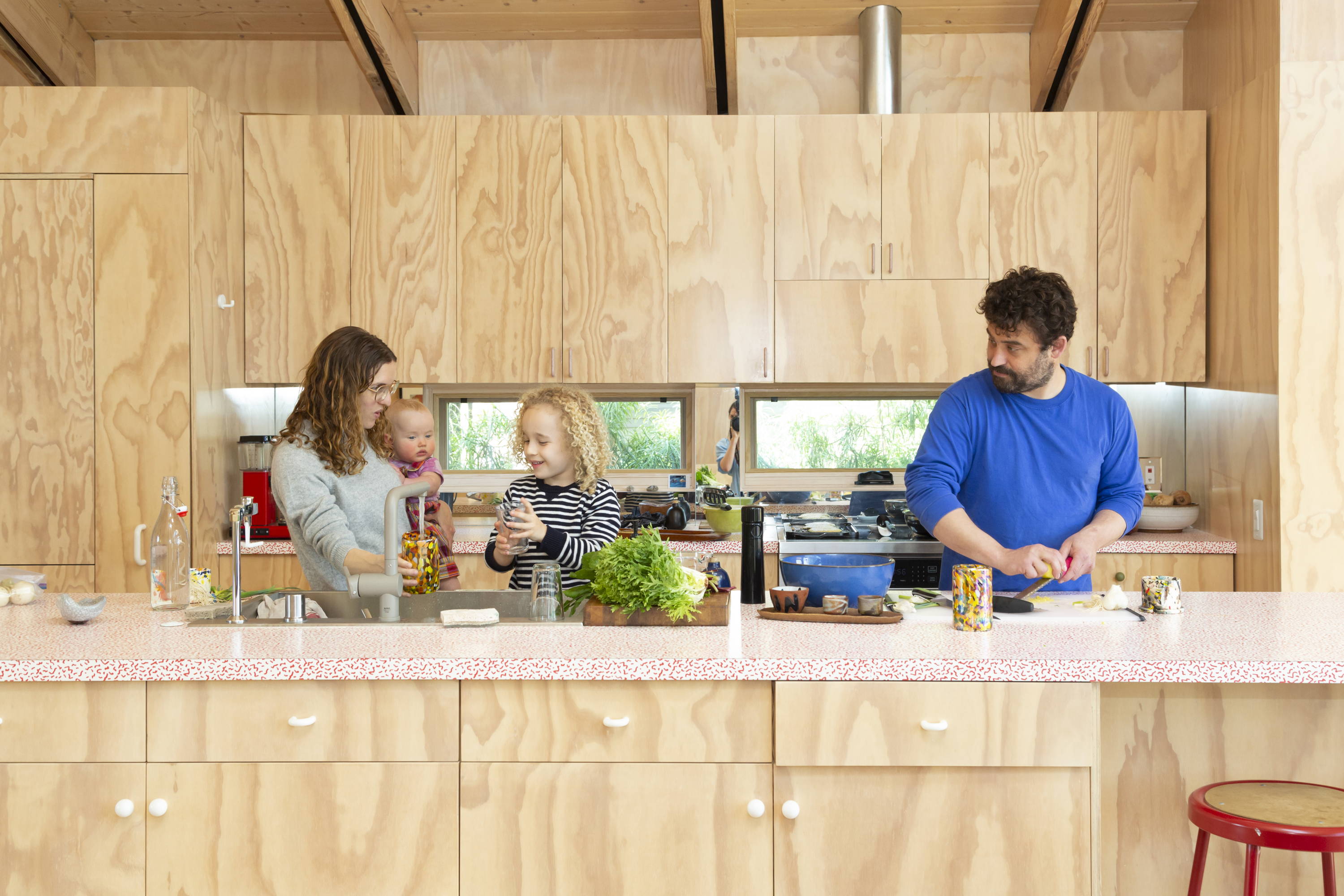 What is working well for you guys, and what still feels like a day to day hurdle while trying to live as ecologically as possible?

We do keep an eye on what appliances or electricity-reliant machines we add to our ecosystem because we want to stay net zero and generate as much, or more, energy as we expend. The good thing is, once you have the system in place, it pretty much runs itself. But, the bad thing is, if you have to make changes, it can throw your calculations off. For example, we bought a very efficient dryer which sounded great, but in practice, it meant things just dried extremely slowly (with two kids this is just not practical). Then it broke, like, a day after its warranty expired. We had to replace it, and in a net zero house, it’s not so simple to find a dryer that doesn’t destroy the balance of our total energy consumption. In the end, and with a lot of research, Isaac sourced the new dryer and did the calculations. The new one brought our total energy usage up 1% but we still make more energy than we use. 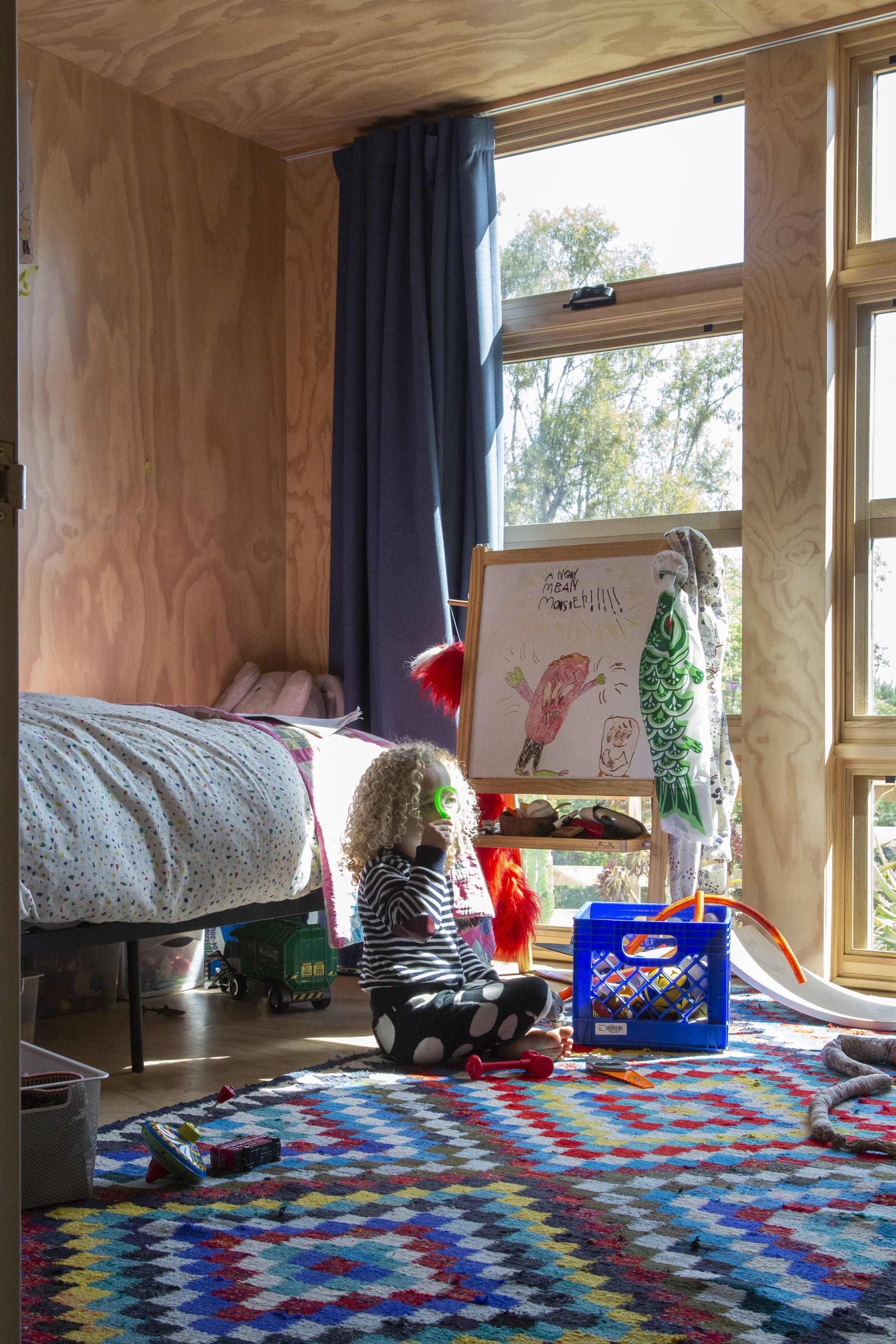 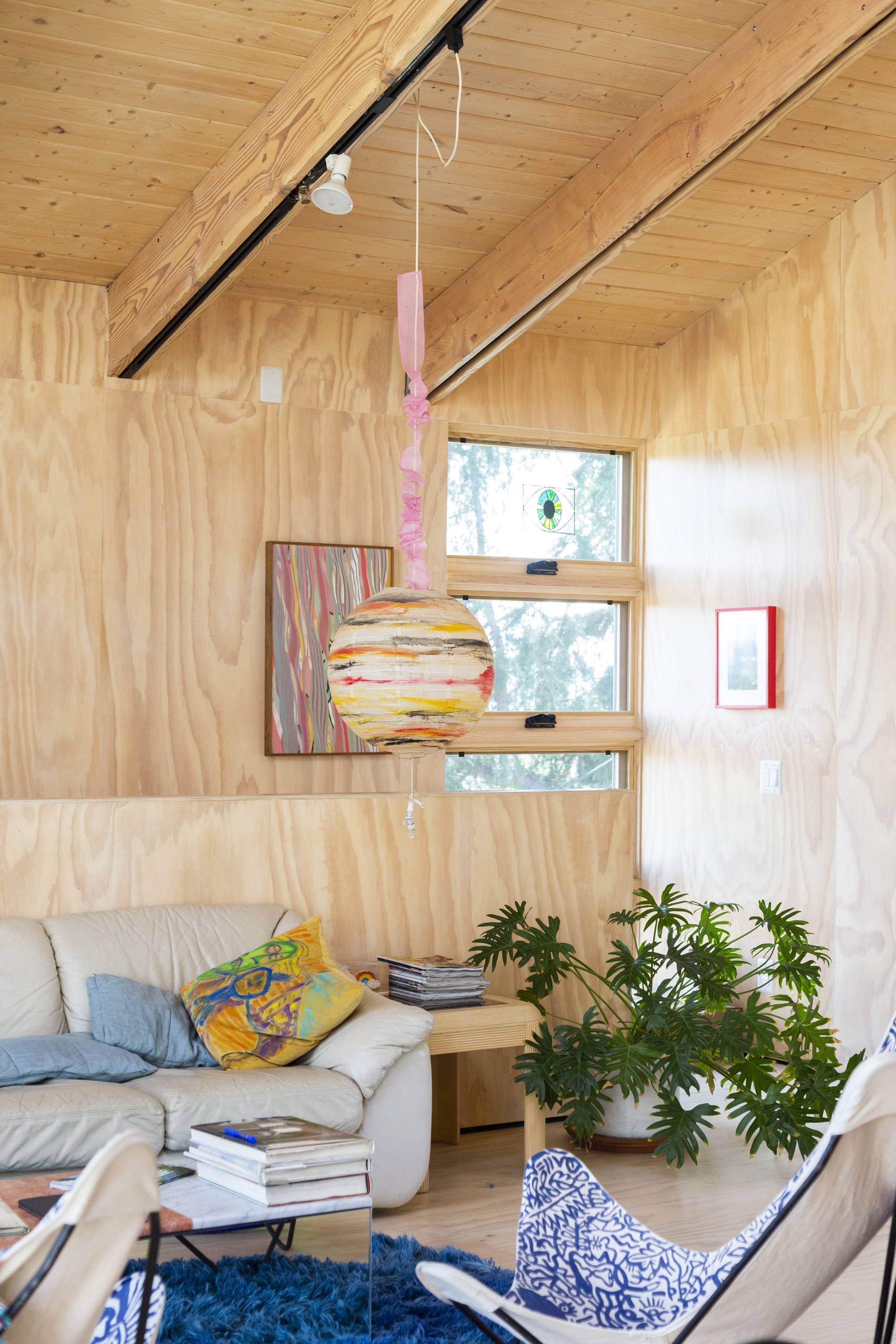 I am curious to hear how the two of you negotiate your relationship to home design. You both have professional practices rooted in art and design, and I wonder what your experience was working together on this home? Do you divide and conquer, or work in tandem on all decisions from the hardware to the furniture?

We tend to divide and conquer, but our roles are constantly shifting. When it comes to materials and furniture, I lay the ground rules and set the guiding light, and then Isaac does the hands-on design and the research. For the decor, I do most of the sourcing but it’s always a conversation and ultimately, a collaborative decision. For more practical fixtures like our hardware, we (meaning myself, my dad and Isaac) all loved 1980s/90s Hewi, and my dad used it in a lot of his design projects back then, and he still does. Isaac found tons of deadstock on Ebay! Isaac does the research and the selection when it comes to the guts of the house, anything that’s a system (like our energy usage or our garden wicking bed, for example).

Tell me a little bit about how the project developed? I know you purchased the land long ago, and worked with Lizz's parents on the landscape and architecture. Did you always know you wanted to build from the ground up? Or did the land present itself and dictate the parameters of the project?

We bought our land in 2011. So a pretty long time ago! We always wanted to build from the ground up, but we originally thought we’d do it ourselves, constructing one piece at a time. But as we got older we had more responsibilities, we realized if we wanted to stay married, that was not a good idea. We also realized that the city of Los Angeles would never let us do it that way, from a permitting perspective.

The topography of the land, a spot in Highland park with fantastic views, shaped the design of the house, as my mom, landscape designer Caren Connolly, sited the project, and my dad, architect Louis Wasserman, designed it. We didn’t break ground until 2018, and we moved in 18 months later. 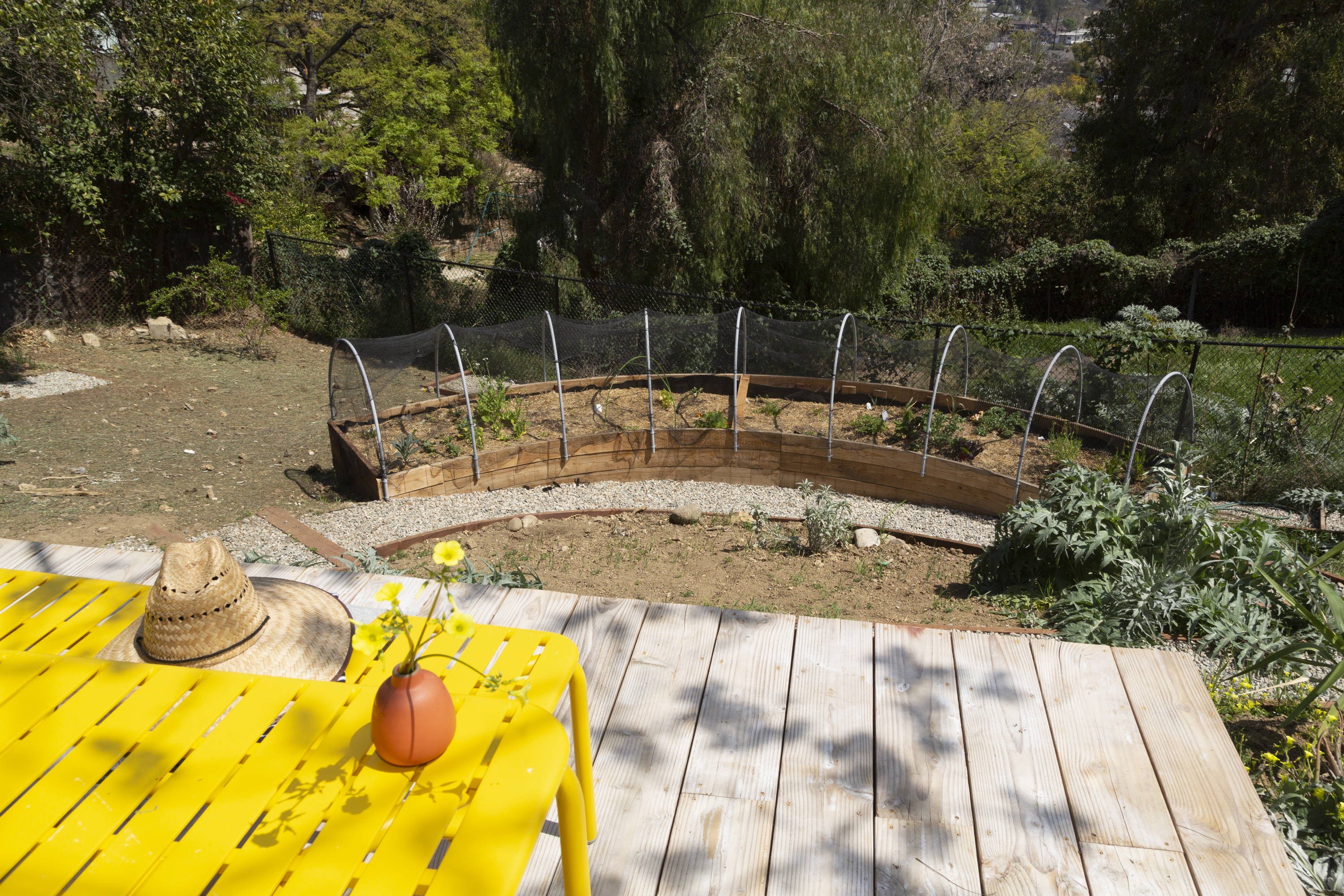 How did working with your parents change the way you understand their practice? Did you share an aesthetic already, or did your parents treat you more like clients, and attempt to cater to your vision?

This is a really nice question, Julia. I think we both gained even more respect for their intellectual approach, and also for the personal love and care they put into their work as designers. We welcomed their vision, but they also appreciated how far we pushed them, and didn’t want to play it safe in any way.

From a more intimate standpoint, they’ve known Isaac for 20 years now, but this really seeded an entirely new aspect to their relationship. For a while Isaac was talking to my dad daily. A lot of the project was collaborative, which could have been tough had my dad not made the overarching design of the house so succinct and clear that we were able to support the overall plan with our interior and materials decisions in a complimentary way. 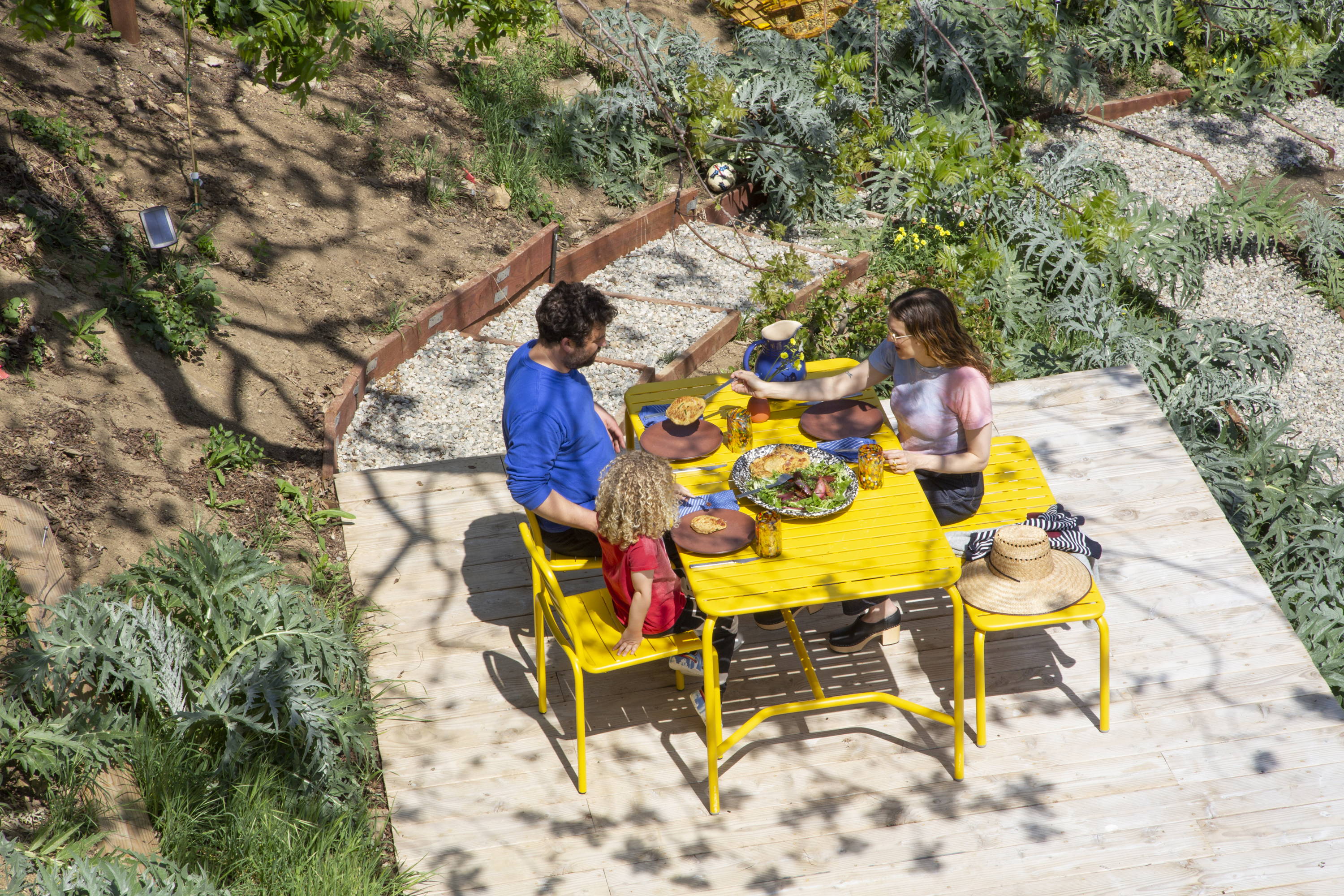 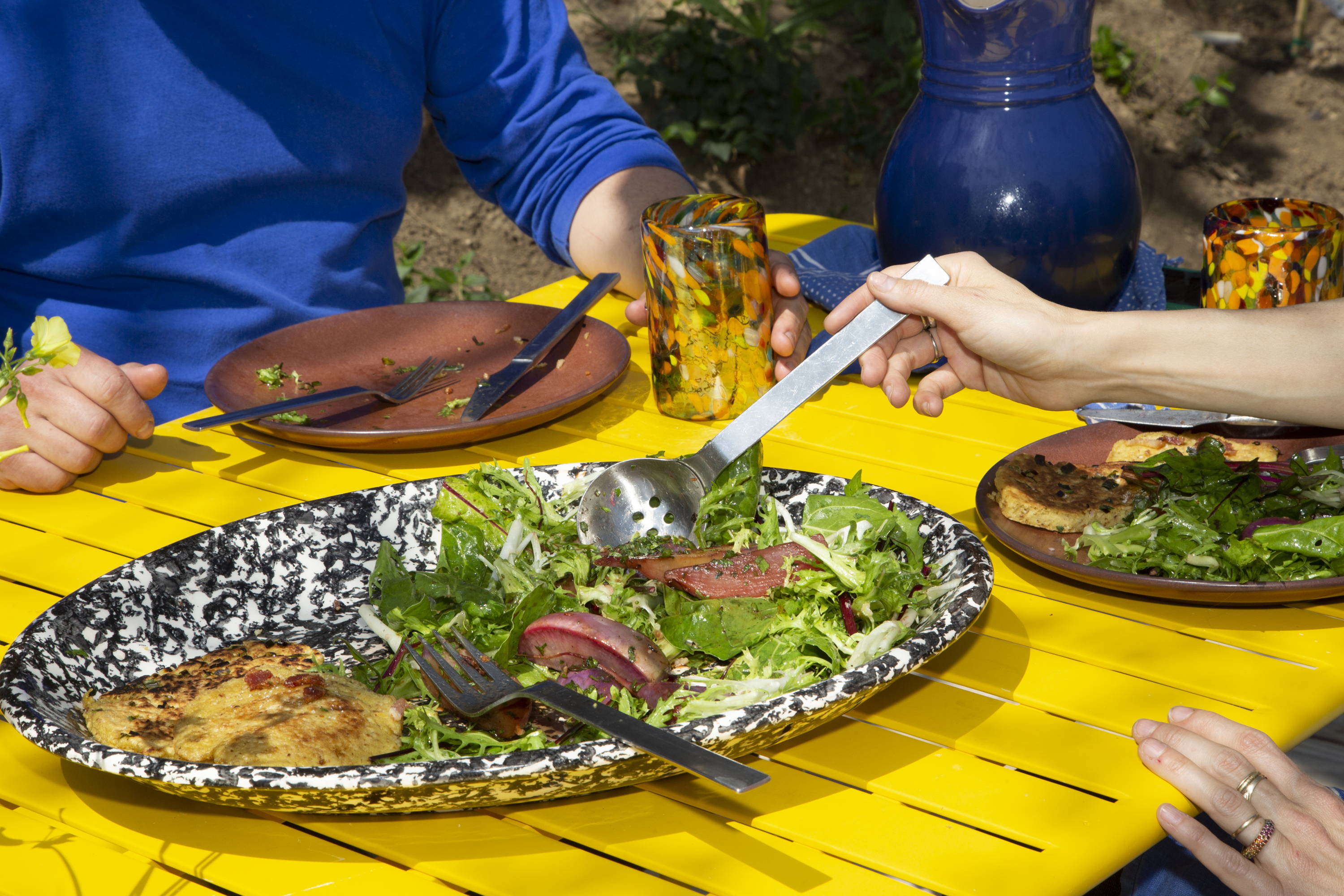 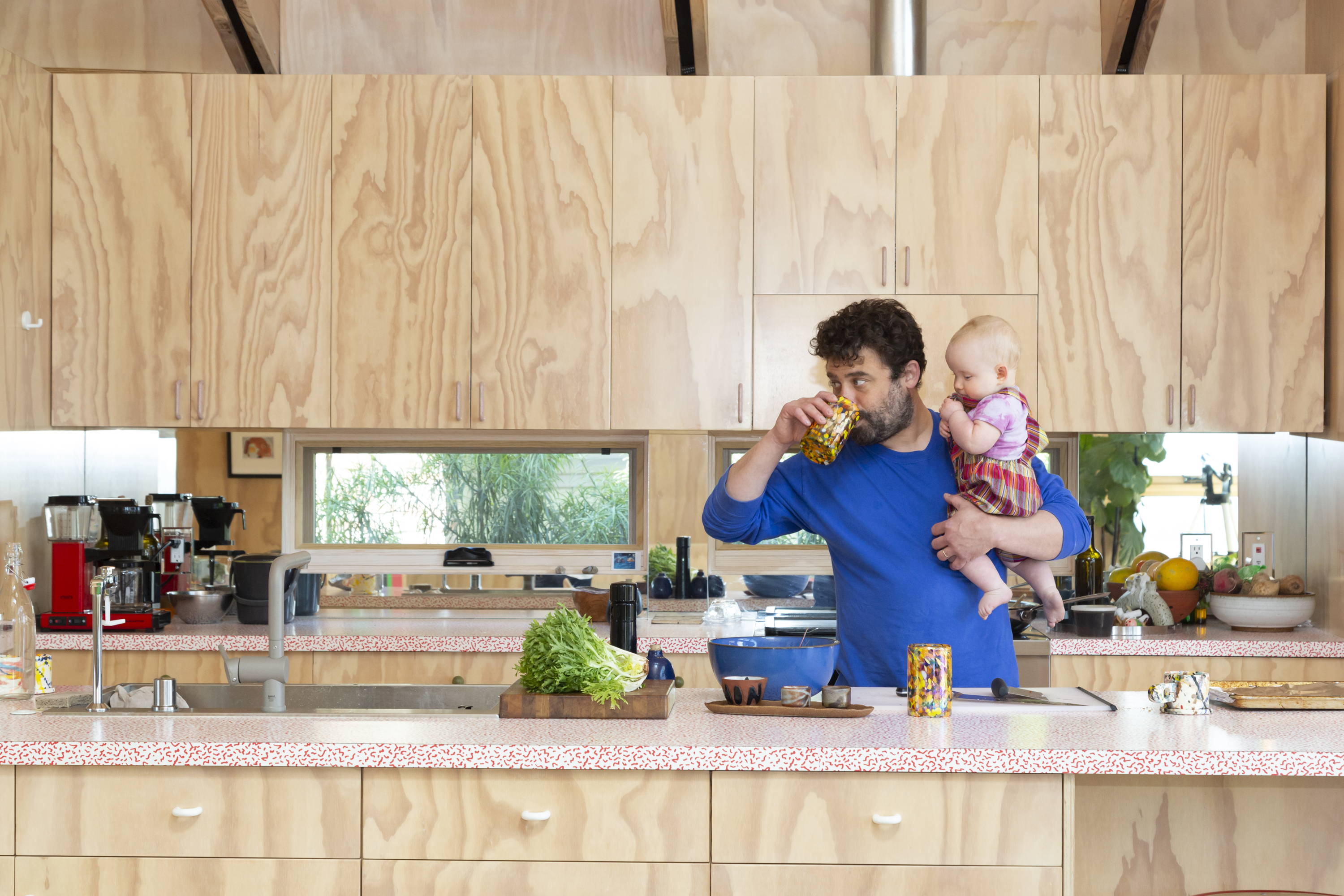 What are some of the more custom details of the house that made it worth building from the ground-up?

While there are some custom details, I think what really made it worth it is that this house truly fits our lifestyle, from how we entertain our friends to how we function as a family.

Any regrets? Personally, I feel like I spent the first year in our house cursing myself for the little things I forgot or didn’t get right, feeling like I only had myself to blame!

There are a couple of conceptual details that we pushed for as designers, that maybe we should have thought about more from the perspective of everyday use. For example, from an aesthetic and sustainability standpoint, we thought we should just have a shower in the master bathroom. But in practice, I find myself wishing I could take a bath without being surrounded by our son’s toys! And we should have made a laundry shoot. But other than that-we think it’s great and can adapt to our needs as our kids grow up and we age.

Tell me about your garden, the water system in the backyard and what you are growing.

The garden is turning into one of our favorite “rooms” of the house. We get to it right away, and I think we wish we’d done it sooner!

We thought a lot about water usage, given the fact that we live in a desert. We just finished putting in a greywater system that feeds most of our fruit trees from our master shower. 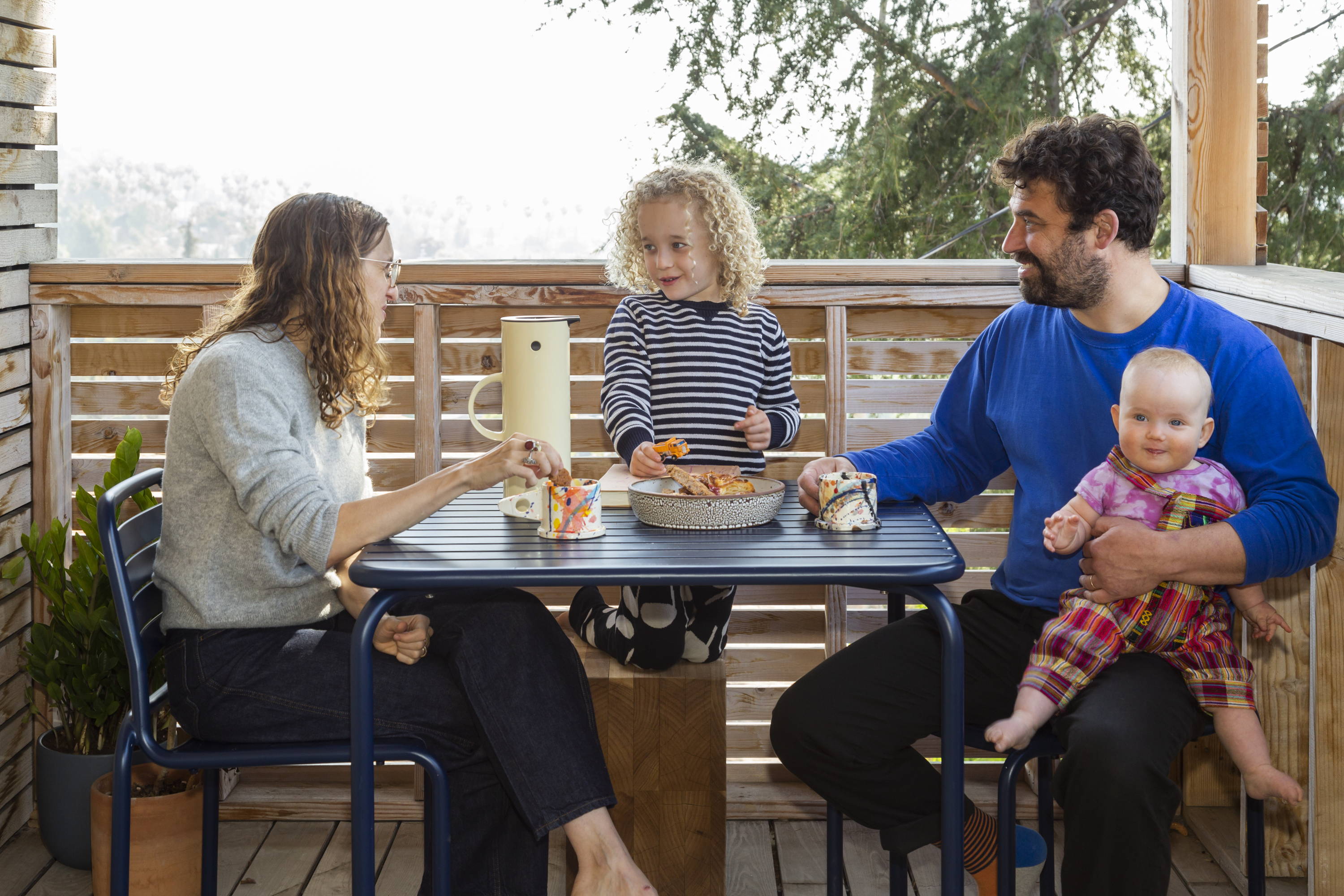 Does this limit the kinds of products you can use in the shower? How easy was this to do?

It kinda does, but maybe in the way we should be limiting them already! The soap and hair products we use aren’t a problem. There is a switch installed so you could shut off the grey water if you needed to clean with harsh chemicals: but I think I just prefer to make sure we never use harsh chemicals.

And tell me about the system for the rainwater-fed wicking garden beds.

Isaac ran pipe from our rainwater barrels (set up outside to capture natural rainfall), to the garden beds and installed a float valve to keep the water level right. Water wicks up from the reservoir below and keeps the plants happy — we’ve only hose-watered twice all year!

What are some of the things you are growing back there? I seem to remember this land was a cardoon forest (a native, wild relative of the artichoke, that is pretty difficult to cook but totally delicious)…

It is still a cardoon forest, and there was always a fig tree, a palm tree and a lot of black walnut trees. But we planted a ton of fruit trees, a bunch of pollinators, and a lot of native ground covers that are drought tolerant plants. In the raised bed we have rainbow chard, lettuce and other greens, strawberries and radishes, and hopefully tomatoes soon. I like that your garden is about 3 years ahead of ours, so I can look at your trees and see what’s hopefully coming. I also love that our kids will grow up alongside these trees.

Featured Products.
The Outdoor Set
This widget makes post narrow
This will be hidden in site
Related Posts
home-profile-vanessa-granda
dave-victoria-sutton-upstate-container-home
This willl be hidden in site and replaced with the corresponding posts.