The fashion designer’s home is an amalgamation of influences and cherished treasures. 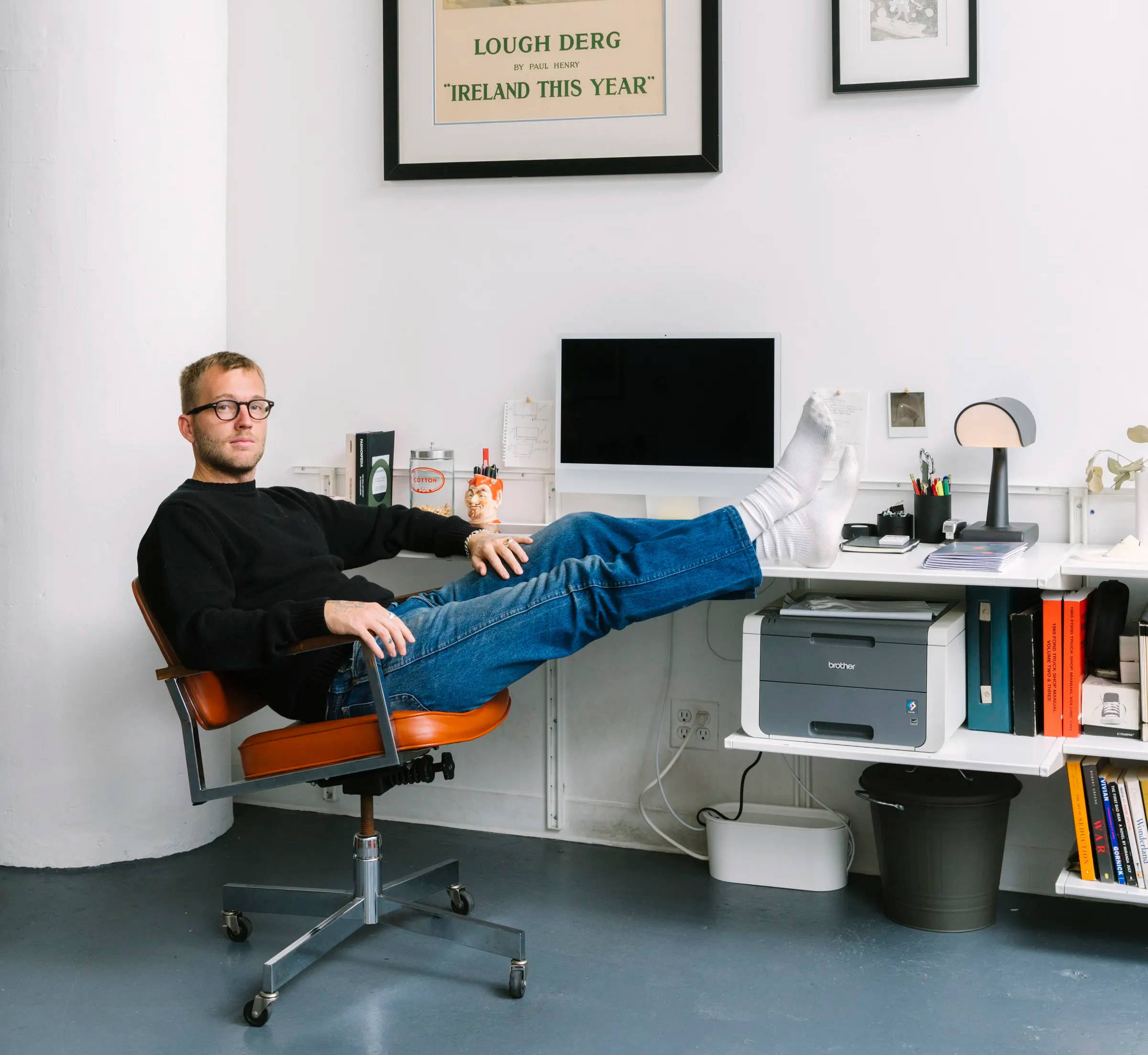 Andrew Livingston got his start in fashion at a young age. His journey into fashion design is an interesting one and eventually led to creating the menswear line Knickerbocker. We visited Andrew in his New York apartment to chat more about his journey and learn more about his unique eye for design — both in fashion and interiors. 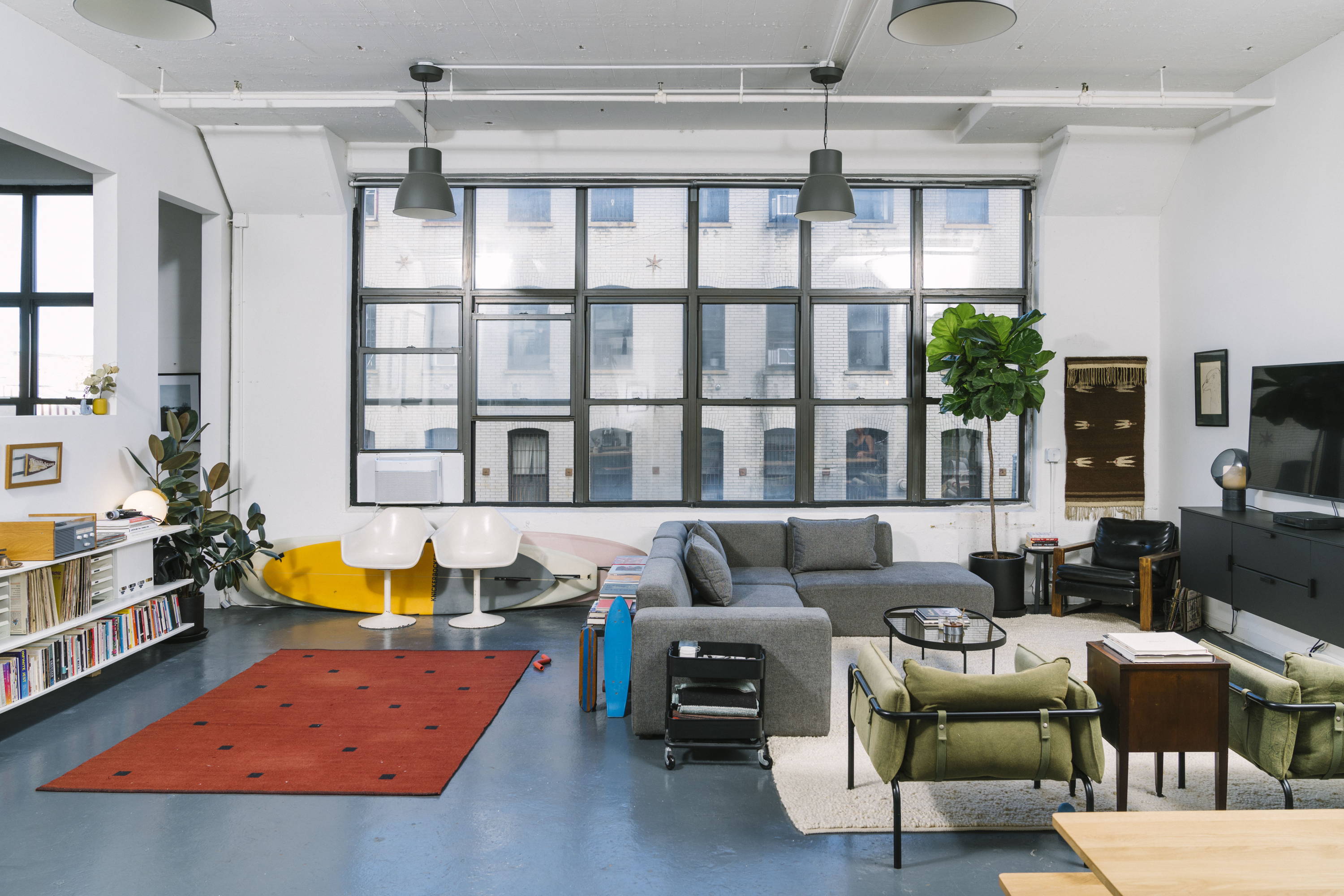 Tell us a little about yourself!

I've spent the past decade in New York. I live in a city with one of the best metro systems, yet I generally take my bicycle or drive to get around. I prefer early mornings and the daytime to the night. However, on occasion, I find myself in my most creative space at night and try to take advantage of that when it comes.

My work has been the instrument responsible for most parts of my being — outside of how I identify with it and how it identifies me, work has brought me around the world, my closest friends, and has generally pushed me to live with purpose. While work plays this integral role in my daily life, I am trying to be more cognizant of the fact that it's not everything — finding balance and specifically doing a better job of being present to issues and people that are not directly a part of my work orbit. Furthermore, I would like to continue learning, surf more, cook more, get back to writing, music and generally put more effort into finding alternative sources of fulfillment outside of work.

When you were younger, you were an athlete — a snowboarder — and you competed on a national level. Can you explain what led you to design menswear? Did you always have an interest in design or fashion?

Those years were very formative for me. I had a few sponsors, one of which was Billabong. They used to send boxes of gear, and sometimes I would go by the warehouse to pick things up. Don't get me wrong, I was always happy and knew even at that age how fortunate I was, but I was never a fan of the product. Being inundated with clothing led me to crave things that were more focused on simplicity and quality. In one of those warehouse trips as a kid, I saw some designers in the offices working. There were various prototype samples and CAD's lying around. I never really thought much about the process up until that point. But my interest was piqued, and I have been going down that rabbit hole ever since.

Were there any lessons/practices from your days as an athlete that you find you apply to your work today?

There are two that stick out to me. The first would be allowing myself to be a child. Not the tantrums, but the curiosity. Each year it gets a bit harder. We form habits, and they're tough to break, but to get back to square one is an opportunity to think limitlessly and with an open mind. Using this example sounds corny, but when Gelfand did the first ollie on a skateboard, he blew minds and broke boundaries. One small idea can forever change our perception of a sport, company, or industry.

The second would be to leave nothing on the table. I hated to lose, but there was no worse feeling than knowing that you didn't prepare enough for an opportunity or that you had a chance and didn't take it. 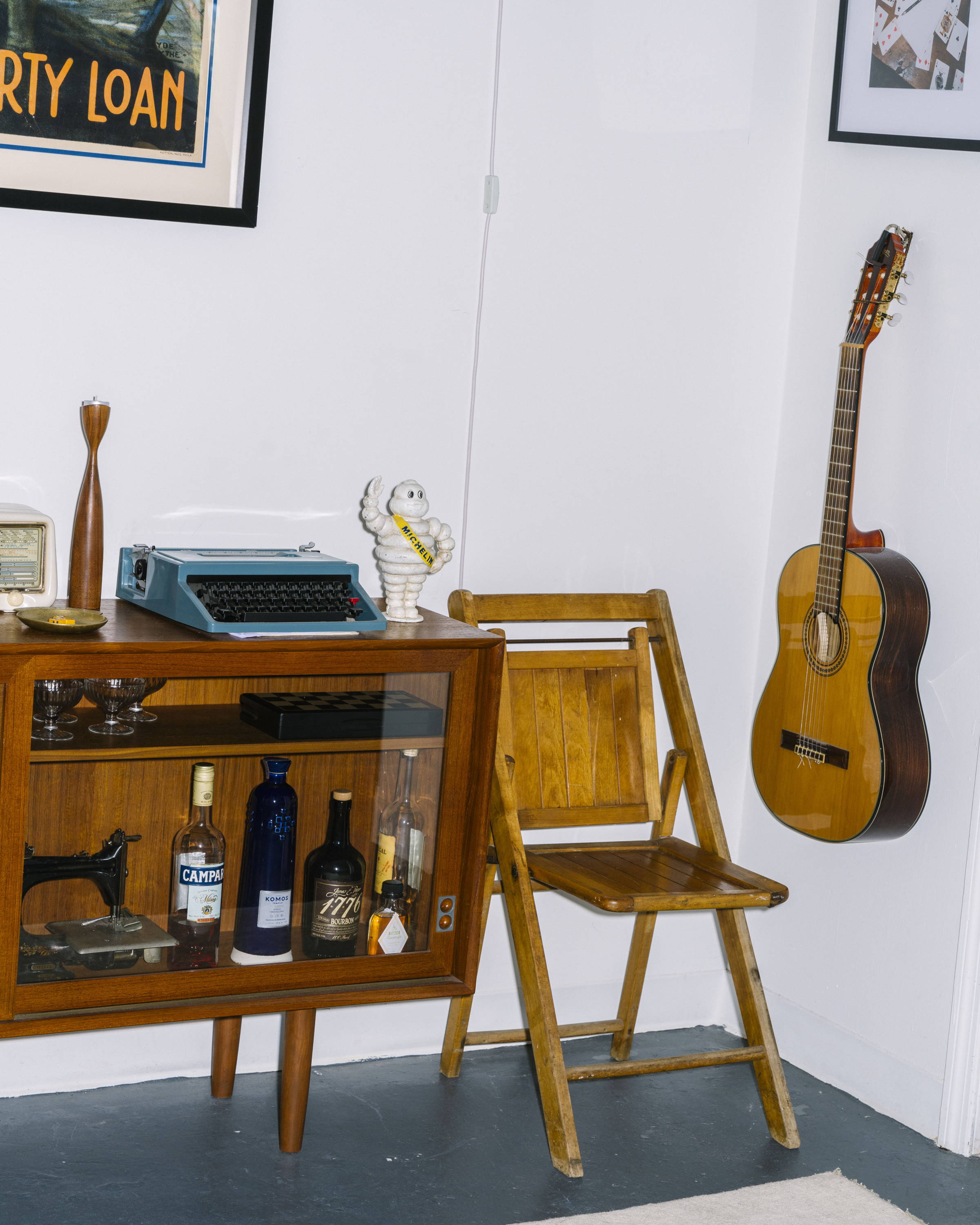 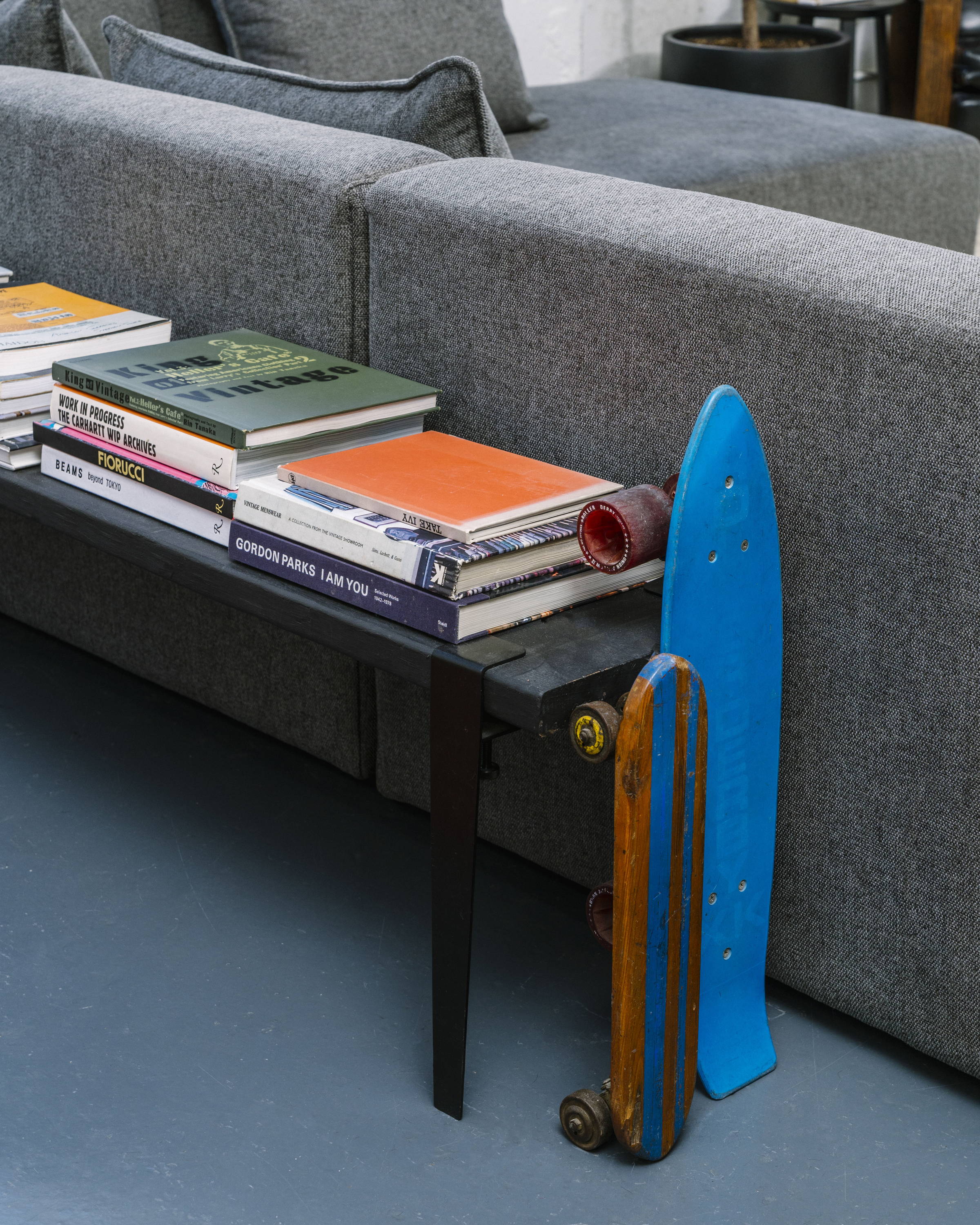 How did Knickerbocker get its start? Where did your interest in heritage wear/American workwear come from?

Before Knickerbocker, I had a small label. We had an account in Japan that started to place some big orders. One of the items they were specifically looking for from us was ball caps, and they needed to be made in the U.S. At that time, there weren't any online databases for finding factories; it was still good ole print and paper. You had to find a broker who would sell you a directory, and I didn't have money to spare on a directory then. But I had a phone camera, and I cheekily took a few photos of some factories in a broker's directory. This led me to a factory named Watman Headwear Corp. based on the border of Brooklyn and Queens in Ridgewood. We ended up working on hats for about a year together, at which point the owner offered up the factory to me. I was 20 years old and filled with grand ideas but hardly a clue what to do with them or how to make them happen. As a designer at that time, I knew how difficult it was to sample, meet factory minimums and really produce anything other than a simple screen-printed t-shirt.

I wanted to do more, and I thought that if this takeover could somehow happen, I would own the ability to produce for myself and on my terms. So I contacted my friends Daniel McRorie and Kyle Mosholder about the opportunity to turn this into reality. I respected both of them massively for their own work — one a shoemaker and a bagmaker with his own brand.

Together we put up a Kickstarter to buy out Watman, and from there, Knickerbocker was born. Knickerbocker was two businesses - the first being the manufacturing company and factory space, which was operated with Dan and Kyle. The second was the brand label, which was my own venture. Ultimately the manufacturing business shut down after five years as we all had different visions for that part of the business. But in the end, those years in the factory were incredibly inspiring. I worked alongside some incredibly talented individuals and had the best of times. They were foundational years for shaping how we look at community, responsibility, and intent as a company today.

Much of menswear is derived from workwear. Workwear is a form of utilitarian wear, which has form, function, and durability at its heart. Clothes are meant to be lived in, and they should be a reliable companion. This category of menswear is where some of the best stories live, and those stories are what we often fall in love with within a garment. Take Burberry, for example. Now a luxury brand, but their formative years were spent in the mud, outfitting the backs of the British military with their now-iconic trench coats in WWI. In designing any collection, we undoubtedly look to certain aspects of history as a guiding influence for cultural significance and what it has taught us about the importance of garment construction from the cloth to the sewing. 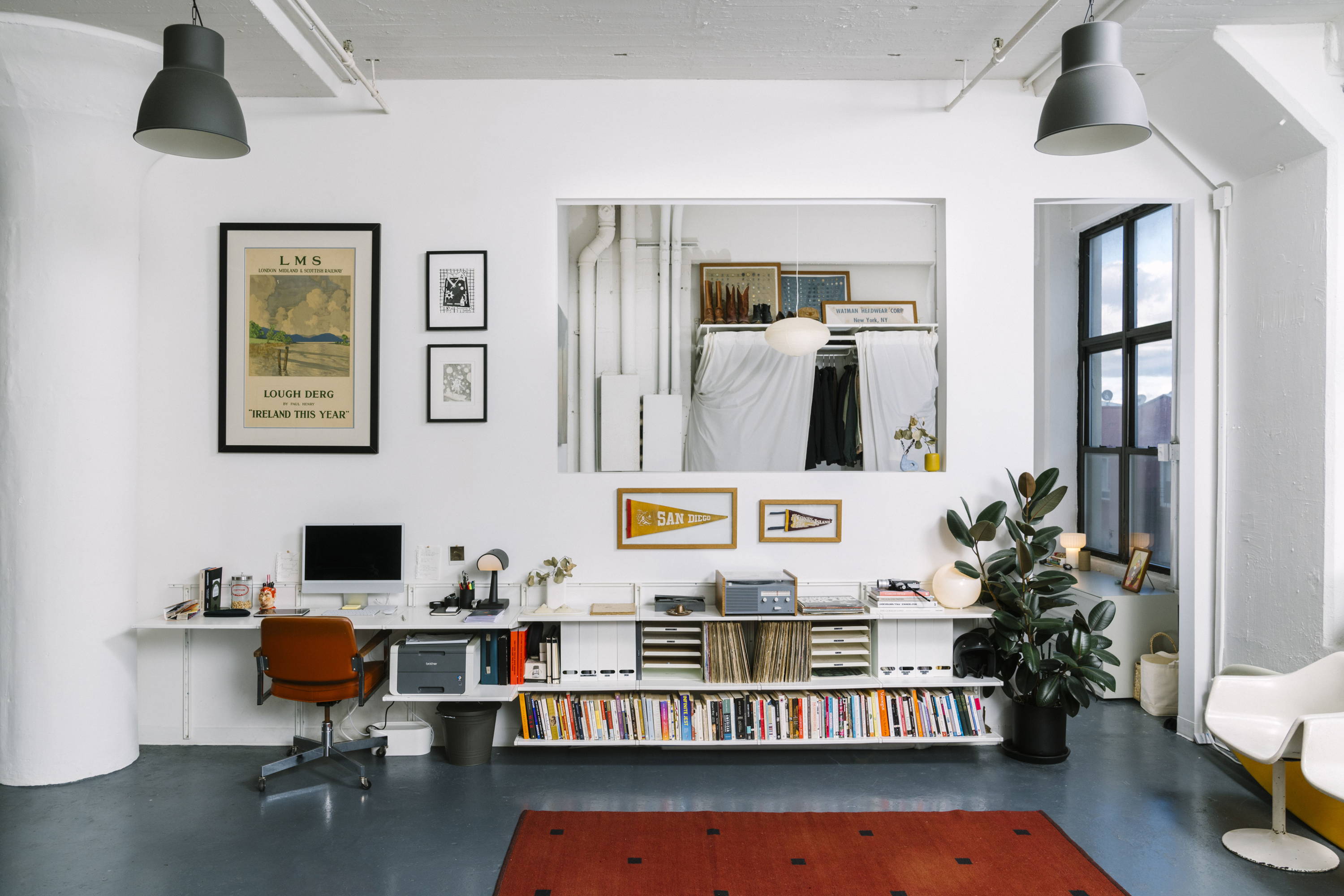 You were pretty young when you started Knickerbocker. What was that experience like for you?

Youth was my greatest asset. I had the rare luxury of time, which afforded me the ability to fail and fail again. Everything was new, stimulating, and just a very exciting time.

Based on that experience, do you have advice for others who are also young and working on a business? Or any advice in general to those starting out?

Always bet on yourself and be true. That means making sure that your business aligns with your values as a person. Undoubtedly, you will need this to justify the amount of work and lack of sleep in your pursuit. But equally important is to enjoy every bit of it and not let fear of failure keep you away. Failed ventures lead to successful ones all the time.

The first flagship store for Knickerbocker opened earlier this year. It also includes The Knickerbocker Bookstore. So how did the concept for the store come about? And why add a bookstore?

It's really been a dream for some time to create a space that allows people to interact with Knickerbocker in a much more meaningful way. The store was designed by myself and Sean Davidson. The brand has matured over the past few years, and we wanted to make sure the store reflected that. The overall design was highly inspired by architect Jean Prouvé and his "Better Days" house. The palette was kept minimal to not overpower the merchandise. Smooth long curves were met with hard corners to create unique shapes. We brought in a range of materials to texturally divide the space using lacquered wood, stainless steel, carpet, caning, and white oak.

The Knickerbocker Bookstore is really about sharing the brand's muses with our customers. We feature a selection of rare books sourced for us by Press SF along with several other new & vintage books. 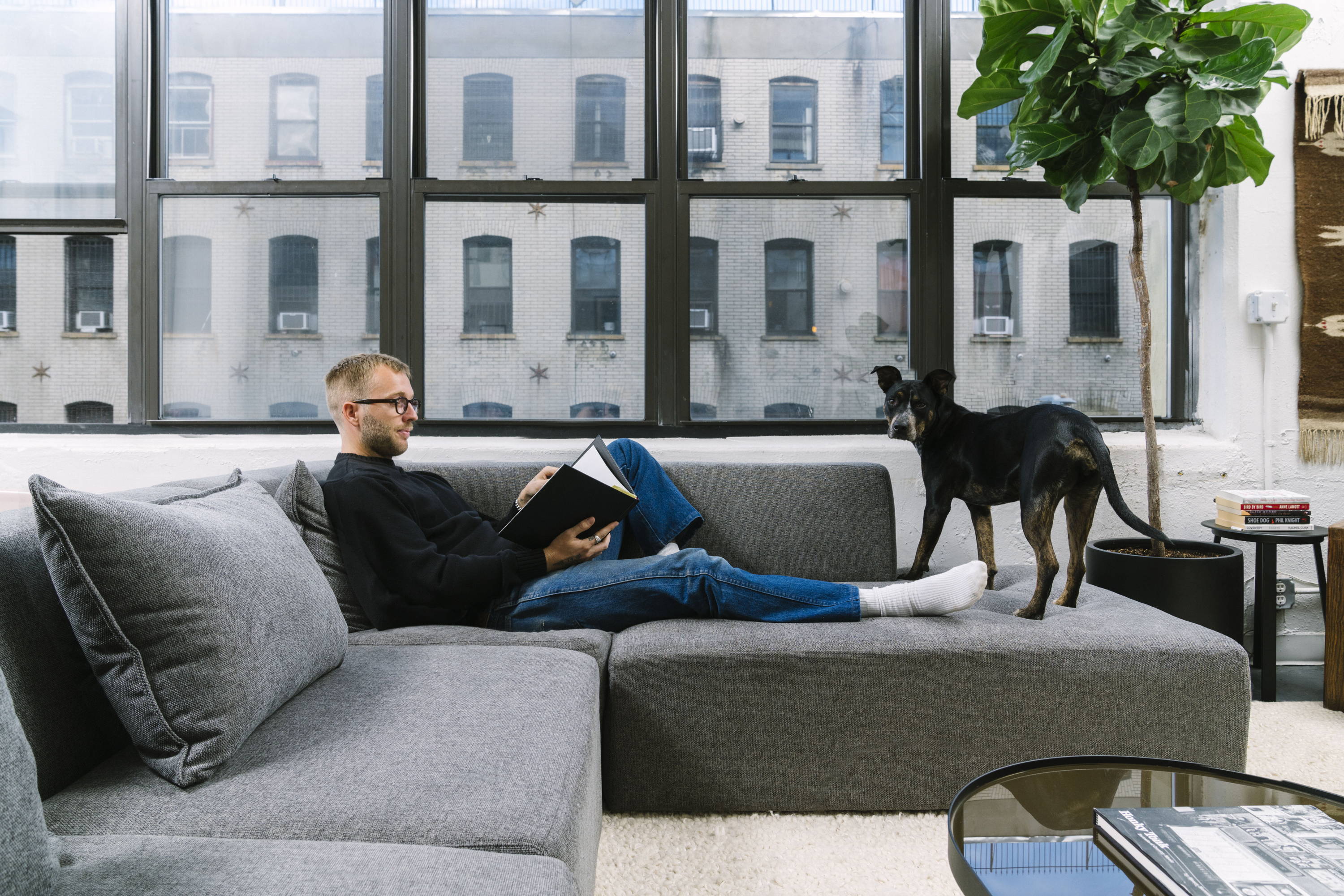 Not only is the Knickerbocker store well designed, but so is your home! Can you tell us more about the inspiration behind the color scheme you’ve chosen?

Well, I am in an open loft with the bedroom and bathroom having the only walls of separation. So, I tried to pair materials and colors with their functions to separate the kitchen from the living room and so on. It still feels a bit random but has come together with time.

Are you drawn to any particular era for inspiration or artists/designers? How do you make sure your personality is reflected in your space?

The decor is really an amalgamation of influences. I enjoy modern design for its simplicity and openness, but you still need a home to feel like home. If I had to pick an era as a favorite, it would be the late 40s into the 50s. Post-WWII ushered in a lot of great designers with manufacturing's changing landscape. I'm mostly drawn to the simple and industrious designs from this period.

I think personality is best reflected in the small objects around your home. The little cherished treasures that somehow make it through each move — small sculptures, little notes, sketches, and travel souvenirs make up the majority of these items for me. The things that are often meaningless to some but live on a pedestal in your home. 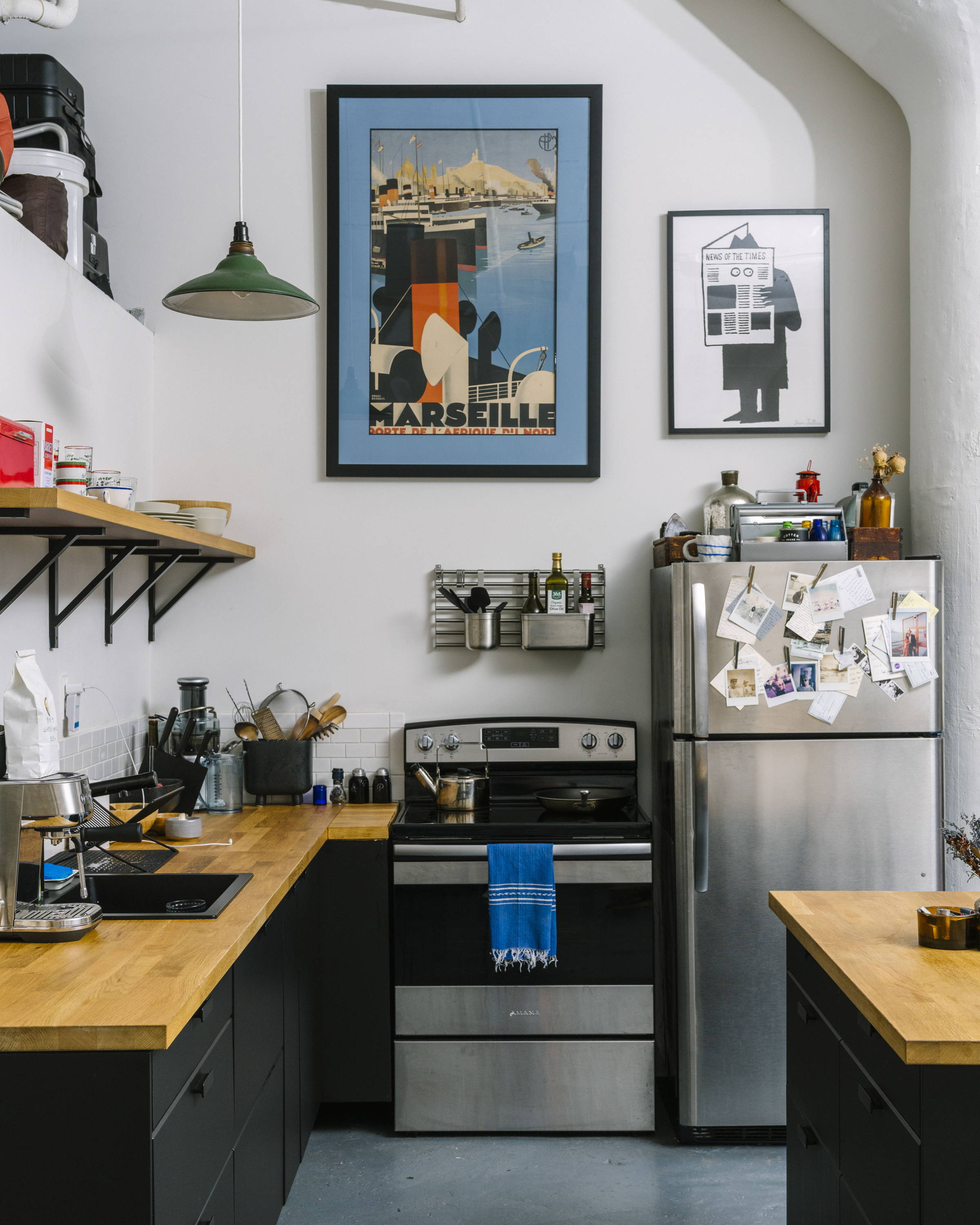 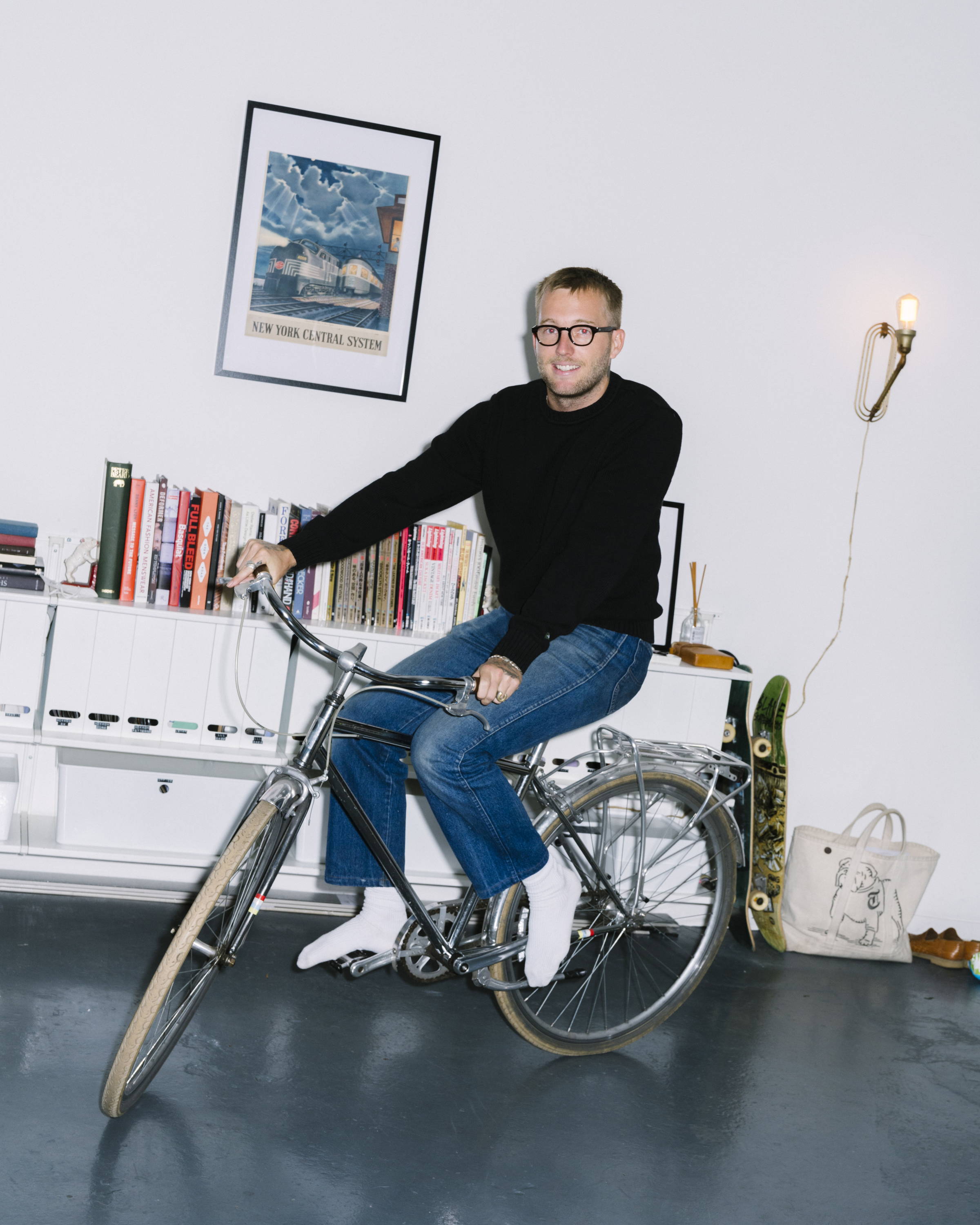 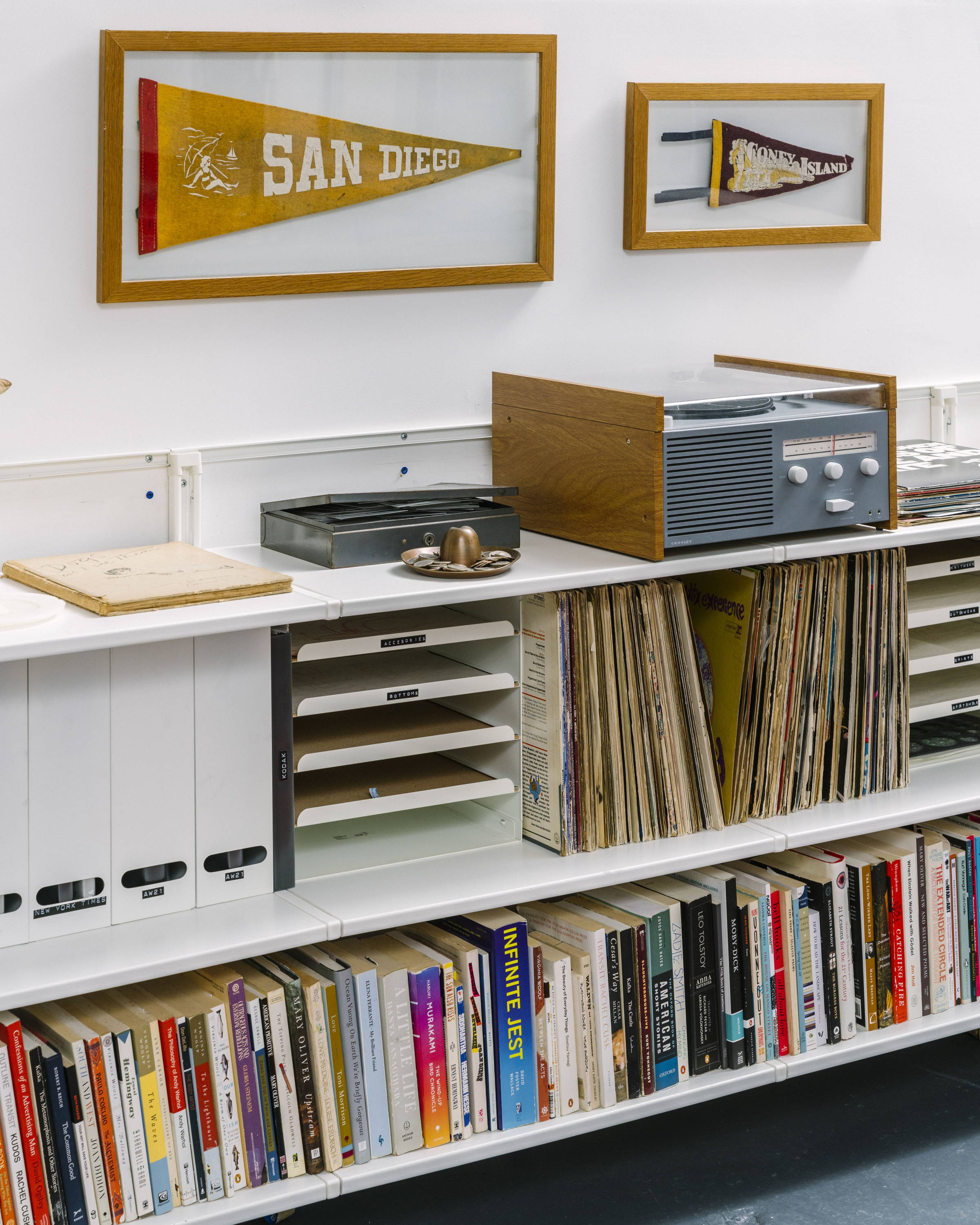 What are some of your favorite pieces in your home?

The pieces with the most personal value will always be the works done by friends — books and artworks in particular. Not saying this because this is a Floyd interview, but The Sectional has been one of the greatest additions to the home. No more losing out on space to my dog and girlfriend.

I'd also add some of the lighting pieces I've acquired over the years to the list of favorites: industrial gooseneck lamps, mid-century MCM sconces that I repurposed, my Noguchi shade, and a few other sconces.

Other pieces I value are a vintage hand-loomed natural indigo rug I found in the middle of Montana that I brought back by plane; a vintage sashiko blanket from Japan; and a cubist wooden rhino sculpture from the early 1900s, which always reminds me of my grandpa who kept a similar-sized rocket ship I made in woodshop that sat on his desk.

You have some interesting framed prints/posters up around the apartment. Do any of them have a story?

Rumor has it that my father found these in a flat-file cabinet while helping someone with a move. I believe they were to be in an estate sale, but he snagged up a stack of these posters before the sale. They are all originals ranging from the 1910s to the '50s. I have a few on the walls at home with a couple more down at the Knickerbocker store. Very lucky to have my hands on these.

For more about Andrew please check out: